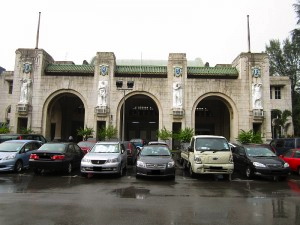 A documentary about Tanjong Pagar Railway Station, a large historical and architectural landmark located in the heart of Singapore’s financial city centre. This railway station is unique in that whilst it is located in Singapore, both the physical structure and land on which the station occupies belong to Malaysia. Due to this distinctive context of the train station, a vibrant community of diverse individuals has sprung up around the station. This documentary delves into the lives of these colourful individuals and tracks how their lives mirror, over the years, the survival story of the train station. 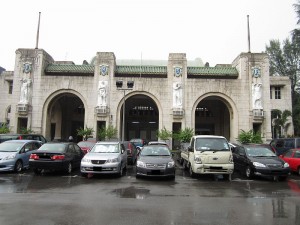 Tanjong Pagar railway station (Chinese: 丹戎巴葛火车总站; Malay: Stesen Keretapi Tanjong Pagar), also called Keppel Road railway station orSingapore railway station, was until 30 June 2011 the southern terminus of the network operated by Keretapi Tanah Melayu (KTM), the main railway operator in Malaysia. The land on which the station and the KTM railway tracks are situated was held by KTM on a 999-year lease. The station closed on 30 June 2011 and the Woodlands Train Checkpoint took over as terminus for KTM’s Singapore services from 1 July 2011.

The main building of the railway station was gazetted as a national monument on 9 April 2011, completing one of the objectives of the new Points of Agreement between Malaysia and Singapore.

Following an agreement between the governments of Malaysia and Singapore on 24 May 2010, railway operations at the station ceased from 1 July 2011. The building will be conserved and may be integrated with future developments on the site or made it to a museum. KTM’s southern terminus was relocated to the Woodlands Train Checkpoint.

A notice of the cessation of operations at the Tanjong Pagar train station displayed on board a train from Kuala Lumpur to Singapore (Tanjong Pagar) on 26 June 2011, during the last week of the station’s operations.

The closure of the line between Tanjong Pagar and the Woodlands checkpoint was something that had been considered for some 20 years with the intention made clear through the Malaysia–Singapore Points of Agreement of 1990, though the exact details could not be agreed upon until the agreement was signed between the two countries in 2010. Though supported by some, the closure was opposed and lamented by others as representing a great loss of Singapore’s heritage and of a key public transportation facility.  Following closure, Singapore has less than a kilometre of main railway line, from Woodlands to Johor Bahru across the Straits of Johor. 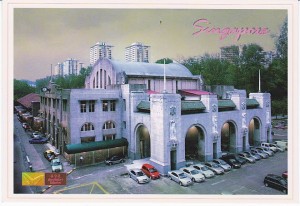 Before the Johor-Singapore Causeway across the Straits of Johor was built, the railway in Singapore was limited to the island. The construction of the causeway began in 1919, and it was opened to goods trains on 17 September 1923 and to passenger trains on 1 October 1923. Previously, passengers and goods were transferred at Woodlands to a ferry to Johor Bahru and the connecting train on the peninsula. Tanjong Pagar railway station was completed on 3 May 1932 and officially opened by Sir Cecil Clementi. It was in operation for around 79 years before it ceased operations on 1 July 2011 to be reserved as the Singapore Railway Museum.

The building is in a richly ornamented Art Deco style. On its exterior are four reliefs of white marble, allegories of Agriculture, Industry, Commerce and Transport. They are works by Rudolfo Nolli.

The hall has a barrel vault roof.

These panels and the original floor slabs were manufactured locally, using rubber to deaden noise. KTM runs six daily KTM Intercity trains between Singapore and Kuala Lumpur, the capital city of Malaysia. It also runs several other trains between Singapore and other parts of Peninsular Malaysia, such as Kelantan state in the northeast. It also operates a shuttle service between Johor Bahru and Singapore for commuters. Until 30 June 2011, the stops in Singapore were at Woodlands (for immigration clearance by Singapore Immigration and disembarkation of passengers travelling from Malaysia) and Tanjong Pagar (embarkation and disembarkation). Since 1 July 2011, the only stop in Singapore is at Woodlands.

Platforms and lines at the Tanjong Pagar Railway Station, with passengers (at left of picture) clearing Malaysian immigration and customs formalities. The train in the distance is for Johor Bahru in Malaysia.

Disputes between Singapore and Malaysia

The status of the railway station was disputed between the governments of Malaysia and Singapore.

When Singapore left Malaysia in 1965, there was no border control between the two countries.  When the two countries established border controls, both the Malaysian and Singaporean Customs, Immigration and Quarantine (CIQ) officers were stationed at Tanjong Pagar for clearance of railway passengers. Road travellers clear immigration at the Malaysian side of the causeway and Woodlands, Singapore upon entry to Singapore. In this case, the CIQ of both countries are separated.

Malaysia-Singapore Points of Agreement of 1990 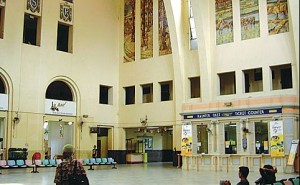 Since 1992 KTM has worked with Singapore on re-aligning its railway tracks at Woodlands, where Singapore built a new immigration checkpoint to replace the old checkpoint, with facilities to carry out train passengers’ immigration clearance instead of at Tanjong Pagar. In 1993, Malaysia responded that it would transfer its CIQ operations to the new Woodlands checkpoint.

However, in June 1997 Malaysia stated that the Malaysia-Singapore Points of Agreement of 1990 would come into effect only after it decided to relocate Tanjong Pagar station. Malaysia also informed Singapore that it had changed its mind and decided not to co-locate its CIQ with Singapore’s at Woodlands Train Checkpoint (WTCP) but to remain at Tanjong Pagar. In April 1998, Singapore informed Malaysia that it would be moving its CIQ operations to Woodlands while Malaysia would have to move its CIQ out of Singapore from 1 August 1998. Malaysia requested, instead, that space be made available at the WTCP, as an interim arrangement, for Malaysian Immigration officials to operate from there and thereby overcome the problem of sequence of exit and entry stampings by Singapore and Malaysia immigration authorities.

According to a press release from the Ministry of Home Affairs of Singapore dated 24 July 1998:

A “Welcome to Malaysia” sign was hung above the entrance, signifying Malaysian ownership of the railway station. It was removed in 2004.

“MALAYSIA IMMIGRATION
JOHOR BAHRU
SOCIAL/BUSINESS VISIT PASS
Reg. 11. Imm. Regs 63
[Date]”
Permitted to enter and remain in West Malaysia and Sabah for one month from the date shown above”

The immigration clearance procedure which resulted from the impasse until 1 July 2011 was:

In early 2007, news of a Singaporean woman being jailed for failing to have her passport stamped when entering Malaysia threw the spotlight on the unusual clearance procedures. The Ministry of Foreign Affairs reminded Singaporeans that their passports would not be stamped when departing for Malaysia by train, instead stamping a disembarkation card, which had to be retained until departure from Malaysia. The entry records were also entered into a computer system.  Even then, this arrangement continued to present problems for some commuters.