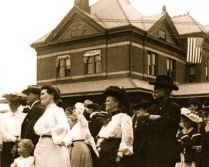 Origin of the county’s name

Sussex County was named by Royal Governor Jonathan Belcher (1689–1757) for Sussex in England which was the ancestral seat of His Grace, Thomas Pelham-Holles, first Duke of Newcastle-upon-Tyne and first Duke of Newcastle-under-Lyne (1693–1768), who at the time was the Secretary of State for the Northern Department, and later the Prime Minister of the United Kingdom (1754–1756, 1757–1762). Pelham-Holles, whose office oversaw British affairs in North America, was Governor Belcher’s political superior. During his term as Governor of New Jersey (1747–1757), Belcher named many municipalities in honor of important British political figures, most of whom were superior to him in rank or precedence. He probably did so attempting to curry political favor, thereby regaining a level of standing that had been diminished from his scandal-caused removal from the Governorship of Massachusetts in 1741.

Sussex, in England, was notable historically as one of the seven kingdoms of the Heptarchy (A.D. 500–850), which were later unified under Egbert of Wessex (c. 770–839) into the Kingdom of England. The -sex suffix indicates the Saxon areas, of people from Saxony; Sus-sex for south Saxon, Es-sex for east Saxon, Wes-sex for west Saxon, and Middle-sex, as opposed to the Anglia names, for the areas of the Angles, Anglos, who came from Angle-land in what is now Denmark. Ironically, Sussex is the most northern county in New Jersey.

Sussex County was under the Wisconsin Glacier which lasted from 21,000 B.C to 13,000 B.C. The glacier covered all of Sussex County. This glacier covered the top of Kittatinny Mountain. End moraines are in Stokes State Forest, Augusta, Hampton Twp., and Andover Twp. After the Wisconsin Glacier melted due to a change in climate, plants and grasses slowly grew. The area was still cold, so the landscape was first Tundra and then changed to Taiga Biome/Boreal Forest. The Boreal forest was a coniferous forest in which spruce and other pine trees grew. Grasslands also grew, as the area had various flora communities. Water was still present from glacial melt. By 12,000 BC the glacier retreated to the Catskills and by 8000 BC the glacier was north of the St Lawrence River in Canada.  Between 8000 BC and 6000 BC Boreal and deciduous forests were growing. This is the time period that the Mastodons became extinct.

Mastodons roamed the area. Mastodons were found at Highland Lakes dated 8940 BC ± 200 years, in Swartswoods Lake, in Liberty Twp. dated 9045 BC ± 750 years, and Orange County, New York dated 7910 BC ± 225 years and 8050 BC ± 160 years. Caribou bones were found at the Dutchess County Cave near Florida, New York. Paleo Indian sites have been found at the Zierdt site in Montague, the Plenge Site in Great Meadows and at the Harry’s Farm Site in Pahaquarry Township, Warren County, in which charcoal has been dated to 5430 BC ± 120 years. Charcoal dated 8940 BC ± 50 years, has been found at the Paleo Indian camp on Broadhead Creek in Pennsylvania, near the Delaware River. This site is one of the earliest Paleo Indian sites in Eastern North America. The caribou bones found in a cave near Florida, New York, site dated 10,580 BC ± 370 years. This suggests that Paleo Indians lived in the Sussex County area as far back as 10,310 BC to 10,950 BC. Paleo Indians lived in small groups and followed game. They were hunter-gatherers who made fluted spear points of Jasper and black Chert. Their numbers were not large and this, along with the fact that their sites are several to many feet below the present ground level, is why Paleo Indian sites are hard to find.

The area warmed and deciduous forests began to grow around 8000 BC. Oaks, maples, birch, willows replaced the coniferous forests and big game became extinct. There are different reasons for this, such as over-hunting or lack of food. By 6000 BC the Coniferous forests were almost gone, except for hemlock trees. Different big game lived in that type of forest, such as deer, elk and moose.   Eventually, the Lenape settled in the area, though the time of their arrival is unknown. Before the Lenape arrived in Sussex County, other native Americans occupied the area. The Lenape lived in river valleys, in flat flood plains.

The purpose of the society is to promote public knowledge and interest in the history of Sussex County, New Jersey, and surrounding areas by:
Compiling, publishing and disseminating information; collecting, preserving and studying historical, genealogical and archaeological records, documents, papers and artifacts; Maintaining a public museum; promoting the preservation and protection of buildings, cemeteries and other sites of historic interest and co-operating with other organizations of similar interest.

The Old Newton Burial Ground, east of Main Street was placed on the National Historical Register in 1986, and is also included in the Newton Historic Dictrict. The Sussex County Historical Society is proud to sponsor the project of restoring the historic wall that encompasses the cemetery. As of the present time the Society has completed, using donations from member & friends, a part of the wall restoration, including the front section facing Main Street, and a small section on the Halsted Street side. The original iron gates have been reset.

In March, 1864, the townships of Andover and Hampton were set off from that of Newton, by which it dimensions were reduced to a very small circle covered by the town and its immediate suburbs.

Andover has an area of twenty square miles; it is five miles north and south, and four east and west. It has Newton and Hampton on the north, Byram and Green on the south; the former with Sparta extending also along its eastern side, and the latter on its western.

The Sussex Railroad, from its junction with the Morris and Essex at Waterloo, runs northerly through this township towards Newton and beyond. Since it was built the thrift aiid business of Andover have greatly increased.  Its population, in 1870, was 1,126.

Andover is in the lower extremity of the county, six miles soath of Newton, on the Sussex Railroad.  In 1714, William Penn, having, by a warrant from the Council of Proprietors, acquired title to a large tract of land in this county, bacame owner of what was afterwards known as the Andover Iron Mine.

Soon after this the mine, with the lands adjoining, passed into the hands of an English Company, from the County of Sussex, in England. This company worked the mine until the second year the Revoiutiouary War. At this time Congress having been informed that iron and steel of the best quality were manufactured here, and. used for purposes of war by the enemy, directed the Government of New Jersey to secure the mine and work it for the benefit of the United States. For five years subsequently it furnished iron and steel for the Continental Army. This mine is situated about one and a half, miles from the present village. For many years after the close of the war it lay deserted, but is now again in good working order under the direction of the Andover Iron Company. This was the first mine opened in the county, and attracted attention to the mineral resources which have since been developed so richly in our hills and valleys.

Hardyston Township was set off from portions of Newton Township by Royal Charter on February 25, 1762.  It was named after Josiah Hardy, who was royal governor of New Jersey from 1761–1763.  The original British spelling of Hardiston was Americanized to Hardyston after the American Revolutionary War.

Hardyston was serviced first by the New Jersey Midland Railway, which built the station in Stockholm. However, there was a dispute over the name as that area was known as Snufftown because of the snuff factory along the Pequannock River, which provide the water power. Through a series of events between the residents of Stockholm and the railroad, the area eventually changed the name from Snufftown to Stockholm. Later, it was the New York, Susquehanna and Western Railway, who provided service into the early 1960s when a mud slide removed a large section of trackage in West Milford Township and coupled with low productivity, the line was not repaired and service was disconnected. Today, the New York Susquehanna and Western Railway runs freight through Hardyston. The main highways are Route 23 and Route 94. A large eastern portion of the township is part of the Pequannock Watershed, which is owned by the City of Newark in Essex County for their water supply.

This crowd of people outside of the Erie Depot in Port Jervis, N.Y. were watching a hot air balloon demonstration – circa 1900.

This is a view of some of the men that built the High Point Monument, Sussex, NJ – circa 1930.