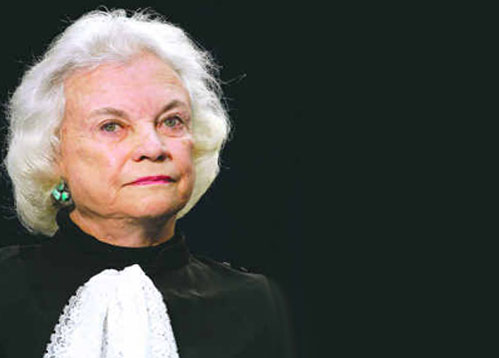 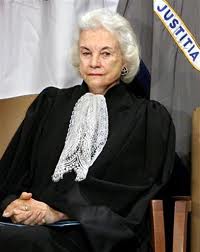 Sandra Day O’Connor (born March 26, 1930) is an American jurist who was the first female member of the Supreme Court of the United States. She served as an Associate Justice from 1981 until her retirement from the Court in 2006. O’Connor was appointed by President Ronald Reagan in 1981. In the latter years of her tenure, she was regarded as having the swing opinion in many cases.

Prior to O’Connor’s appointment to the Court, she was an elected official and judge in Arizona. On July 1, 2005, she announced her intention to retire effective upon the confirmation of a successor. President George W. Bush first unsuccessfully nominated Harriet Miers to replace O’Connor, then nominated JusticeSamuel Alito to take her seat in October 2005. Alito joined the Court on January 31, 2006.

O’Connor was Chancellor of The College of William & Mary in Williamsburg, Virginia, and currently serves on the board of trustees of the National Constitution Center in Philadelphia, Pennsylvania.

In 2001, the Ladies’ Home Journal ranked her as the second-most-powerful woman in America. In 2004 and 2005, Forbes magazine listed her as the sixth- and thirty-sixth-most-powerful woman in the world, respectively; the only American women preceding her on the 2004 list were then-National Security AdvisorCondoleezza Rice, then-U.S. Senator Hillary Rodham Clinton, and then-First Lady Laura Bush. On August 12, 2009, she was awarded the Presidential Medal of Freedom, the highest civilian honor of the United States, by President Barack Obama.  See film about Supreme Court Justice Sandra Day O’Connor below.