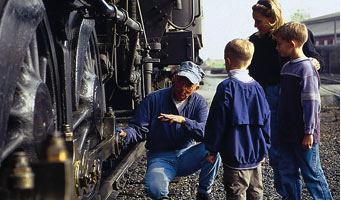 The historic village of Strasburg – with its square at the intersection of Routes 741 and 896 – was originally established in the early 1700s. In its early days, the town prospered as a stagecoach stop between Philadelphia and Lancaster, with taverns springing up to provide overnight accommodations and entertainment. An ensuing rowdy period ended in about 1795, when the Lancaster Turnpike (modern-day Route 30) was completed.

During the late 1700’s and early 1800’s, the community (and its credibility) grew with the establishment of more schools, a post office and church. Strasburg’s growth and development continued during the latter half of the 19th century, but at a slower pace, which helped to preserve the core examples of Swiss, German, Georgian and Federal architecture.

Today, visitors can travel through Strasburg and still see these unique structures of the past and experience the same old-town charm that was established hundreds of years ago. Notable buildings and residences are preserved and tucked in among including train-related attractions, warm bed and breakfasts, historic taverns and inns, quaint cafes and local shops.

Plus, this “traintown” is surrounded by sprawling Amish farmlands. Drive just a few miles in most any direction of Strasburg and get lost in the picturesque countryside. Admire the southern end of Lancaster County and its covered bridges via either of two driving tours that stop in Strasburg: the Southern Amish Countryside Trail and the Scenic Parks & Preserves Trail.