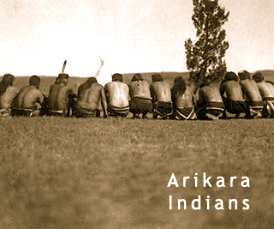 A brief history of South Dakota (United States) and mining at the Homestake mines. 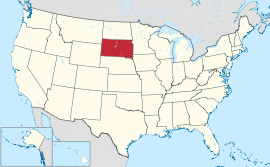 i/ˌsaʊθ dəˈkoʊtə/) is a state located in the Midwestern region of the United States. It is named after the Lakota and Dakota Sioux American Indian tribes. South Dakota is the 17th most extensive, but the 5th least populous and the 5th least densely populated of the 50 United States. Once the southern portion of the Dakota Territory, South Dakota became a state on November 2, 1889. Pierre is the state capital and Sioux Falls, with a population of nearly 160,000, is South Dakota’s largest city.

South Dakota is bordered by the states of North Dakota, Minnesota, Iowa, Nebraska,Wyoming, and Montana. The state is bisected by the Missouri River, dividing South Dakota into two geographically and socially distinct halves, known to residents as “East River” and “West River.” Eastern South Dakota is home to most of the state’s population, and fertile soil in this area is used to grow a variety of crops. West of the Missouri, ranching is the predominant agricultural activity, and the economy is more dependent on tourism and defense spending.

The Black Hills, a group of low pine-covered mountains, is located in the southwest part of the state. The Black Hills are sacred to the Sioux. Mount Rushmore, a major tourist destination, is located there. Other attractions in the southwest include Badlands and Wind Cave national parks, Custer State Park, the Crazy Horse Memorial, and historic Deadwood. South Dakota experiences a temperate continental climate, with four distinct seasons and precipitation ranging from moderate in the east to semi-arid in the west. The ecology of the state features species typical of a North American grassland biome. 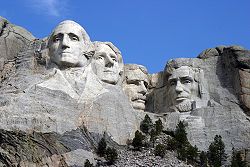 South Dakota contains several sites that are administered by the National Park Service. Two national parks have been established in South Dakota, both located in the southwestern part of the state. Wind Cave National Park, established in 1903 in the Black Hills, contains an extensive cave network as well as a large herd ofbison.  Badlands National Park was created in 1978.  The park features an eroded, brightly-colored landscape surrounded by semi-arid grasslands.  Mount Rushmore National Memorial in the Black Hills was established in 1925. The sculpture of four U.S. Presidents was carved into the mountainside by sculptor Gutzon Borglum.

Other areas managed by the National Park Service include Jewel Cave National Monument near Custer, the Lewis and Clark National Historic Trail, the Minuteman Missile National Historic Site, which features a decommissioned nuclear missile siloand a separate missile control area located several miles away, and the Missouri National Recreational River.  The Crazy Horse Memorial is a large mountainside sculpture near Mt. Rushmore that is being constructed with private funds.

Humans have inhabited the area for several millennia, with the Sioux becoming dominant by the early 19th century. In the late 19th century, European-American settlement intensified after a gold rush in the Black Hills and the construction of railroads from the east. Encroaching miners and settlers caused conflict that triggered a number of Indian Wars, ending with the Wounded Knee Massacre in 1890. Key events in the 20th century included the Dust Bowl and Great Depression, increased federal spending during the 1940s and 50s for agriculture and defense, and an industrialization of agriculture which has much reduced family farming.

While several Democratic senators have represented South Dakota for multiple terms at the federal level, the state government is largely dominated by the Republican Party, whose nominees have carried South Dakota in each of the most recent eleven presidential elections. Historically dominated by an agricultural economy and a rural lifestyle, South Dakota has recently sought to diversify its economy to attract and retain residents. South Dakota’s history and rural character still strongly influence the culture of the state.

Humans have lived in what is today South Dakota for at least several thousand years. The first inhabitants were Paleoindian hunter-gatherers, and disappeared from the area around 5000 BC.   Between 500 AD and 800 AD, a semi-nomadic people known as the Mound Builders lived in central and eastern South Dakota. In the 14th century, the Crow Creek Massacre occurred, in which several hundred men, women, and children were killed near the Missouri River.

By 1500 the Arikara (or Ree) had settled in much of the Missouri River valley.   European contact with the area began in 1743, when the LaVerendrye brothers explored the region. The LaVerendrye group buried a plate near the site of modern day Pierre, claiming the region for France as part of greater Louisiana.  By the early 19th century, the Sioux had largely replaced the Arikara as the dominant group in the area.

In 1803, the United States purchased the Louisiana Territory, an area that included most of South Dakota, from Napoleon Bonaparte, and President Thomas Jefferson organized a group commonly referred to as the “Lewis and Clark Expedition” to explore the newly-acquired region.   In 1817, an American fur trading post was set up at present-day Fort Pierre, beginning continuous American settlement of the area.  In 1855, the U.S. Army bought Fort Pierre but abandoned it the following year in favor of Fort Randall to the south.   Settlement by Americans and Europeans was by this time increasing rapidly, and in 1858 the Yankton Sioux signed the 1858 Treaty, ceding most of present-day eastern South Dakota to the United States. 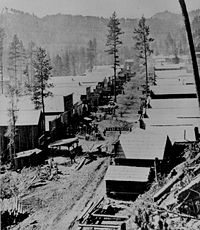 Deadwood, like many other Black Hills towns, was founded after the discovery of gold.

Land speculators founded two of eastern South Dakota’s largest present-day cities: Sioux Fallsin 1856   and Yankton in 1859.   In 1861, the Dakota Territory was established by the United States government (this initially included North Dakota, South Dakota, and parts ofMontana and Wyoming).   Settlement of the area, mostly by people from the eastern United States as well as western and northern Europe, increased rapidly, especially after the completion of an eastern railway link to Yankton in 1873.   In 1874 gold was discovered in theBlack Hills during a military expedition led by George A. Custer and miners and explorers began illegally entering land promised to the Lakota.

Custer’s expedition took place despite the fact that the US had granted the entire western half of present-day South Dakota (West River) to the Sioux in 1868 by the Treaty of Laramie as part of the Great Sioux Reservation. The Sioux declined to grant mining rights or land in the Black Hills, and war broke out after the U.S. failed to stop white miners and settlers from entering the region. Eventually the US defeated the Sioux and broke up the Great Sioux Reservation into five reservations, settling the Lakota in those areas.

(In 1980, the US Supreme Court and Congress ordered payment to the Lakota for the illegal seizure of the Black Hills. The case remains unsettled, as the Lakota refuse to accept the money and instead insist on the return of the land.)   A growing population caused Dakota Territory to be divided in half and President Benjamin Harrison signed proclamations formally admitting both South Dakota and North Dakota to the union on November 2, 1889. Harrison had the papers shuffled to obscure which one was signed first and the order went unrecorded.

On December 29, 1890, the Wounded Knee Massacre occurred on the Pine Ridge Indian Reservation. Commonly cited as the last major armed conflict between the United States and the Lakota Sioux Nation, the massacre resulted in the deaths of at least 146 Sioux, many of them women and children.   31 U.S. soldiers were also killed in the conflict. 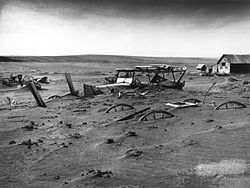 A South Dakota farm during the Dust Bowl, 1936

During the 1930s, several economic and climatic conditions combined with disastrous results for South Dakota. A lack of rainfall, extremely high temperatures and inappropriate cultivation techniques produced what was known as the Dust Bowl in South Dakota and several other plains states. Fertile topsoil was blown away in massive dust storms, and several harvests were completely ruined. The experiences of the Dust Bowl, coupled with local bank foreclosures and the general economic effects of the Great Depression, resulted in many South Dakotans leaving the state. The population of South Dakota declined by more than 7% between 1930 and 1940.

Economic stability returned with the U.S. entry into World War II in 1941, when demand for the state’s agricultural and industrial products grew as the nation mobilized for war. In 1944, the Pick–Sloan Plan was passed as part of the Flood Control Act of 1944 by the U.S. Congress, resulting in the construction of six large dams on the Missouri River, four of which are at least partially located in South Dakota.  Flood control, hydroelectricity, and recreational opportunities such as boating and fishing are provided by the dams and their reservoirs.

In recent decades, South Dakota has transformed from a state dominated by agriculture to one with a more diversified economy. The tourism industry has grown considerably since the completion of the interstate system in the 1960s, with the Black Hills becoming more important as a destination. The financial service industry began to grow in the state as well, with Citibank moving its credit card operations from New York to Sioux Falls in 1981, a move that has since been followed by several other financial companies. South Dakota was the first state to eliminate caps on interest rates.

In 2007, the site of the recently closed Homestake gold mine near Lead was chosen as the location of a new underground research facility.   Despite a growing state population and recent economic development, many rural areas have been struggling over the past 50 years with locally declining populations and the emigration of educated young adults to larger South Dakota cities, such as Rapid City or Sioux Falls, or to other states.   Mechanization and consolidation of agriculture has contributed greatly to the declining number of smaller family farms and the resulting economic and demographic challenges facing rural towns.