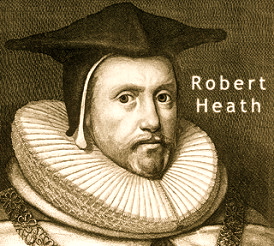 An animated history of the history of rice in the South Carolina Lowcountry, narrated by Anthony Bourdain on Episode 3 of Season 2, Mind of a Chef: Rice.  PBS series The Mind of a Chef combines travel, cooking, history, science, and humor into an unforgettable journey. In season two, Join executive producer and narrator Anthony Bourdain as he takes viewers inside the mind of Chefs Sean Brock and April Bloomfield, airing Saturday, September 7th on PBS. Check your local listings for air times here: http://to.pbs.org/Z0rfcq. 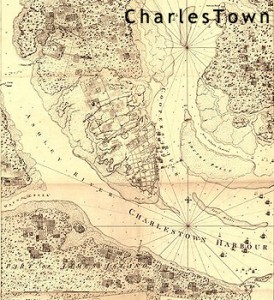 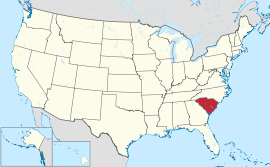 i/ˌsaʊθ kærəˈlaɪnə/) is a state in the Southeastern United States. It is bordered to the north by North Carolina; to the south and west by Georgia, located across the Savannah River; and to the east by the Atlantic Ocean. Originally part of the Province of Carolina, the Province of South Carolina was one of the 13 coloniesthat declared independence from the British Crown during the American Revolution. The colony was originally named by King Charles II of England in honor of his father Charles I (Carolus being Latin for Charles). South Carolina was the 8th state to ratify the US Constitution and become a state which it did on May 23, 1788. South Carolina later became the first state to vote to secede from the Union which it did on December 20, 1860. It was readmitted to the United States on June 25, 1868.

South Carolina is the 40th most extensive and the 24th most populous of the 50 United States. South Carolina comprises 46 counties. The capital and largest city of the state is Columbia. 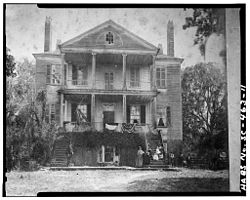 The colony of Carolina was settled by English settlers, mostly from Barbados.   King Charles gave eight aristocrats a royal charter to settle Carolina (Carolina is Latin for “Charles land”) because earlier they had helped him regain his throne. Parts of Carolina (mostly the coastal areas) were colonized earlier by Spain (see Fort Caroline), but battles between the Spanish and the Native Americans caused the Spanish people to retreat to Florida, Cuba, Mexico, and Central and South America. Carolina was settled to make profit from trade and also by selling land. John Locke, an English philosopher, wrote a constitution for the colony that covered topics such as land divisions and social rankings. In the early years, not many people bought land there, so the proprietors lowered the price on some portions.

Carolina did not develop as planned. It split into northern and southern Carolina, creating two different colonies. It separated because of political reasons as the settlers wanted political power. In 1719 settlers in southern Carolina seized control from its proprietors. Then, in 1729, Carolina became two royal colonies- North Carolina and South Carolina. Farmers from inland Virginia settled northern Carolina. They grew tobacco, and sold timber and tar, both categories of naval supplies needed by England. The northern Carolina coast lacked a good harbor, so many of the farmers used Virginia’s ports to conduct their trade.

Southern Carolina prospered from the fertility of the Low Country and the harbors, such as that at Charles Town (later Charleston). Settlements spread, and trade in deerskin, lumber, and beef thrived. Rice cultivation was developed on a large scale with the help of skills and techniques of slaves imported from rice-growing regions of Africa. They created the large earthworks of dams and canals required to irrigate the rice fields. In addition, indigo became a commodity crop, also developed with the skills of African slaves. The cultivation and processing of indigo, a blue flowering plant, was developed here by a young English woman, Eliza Lucas, a planter’s daughter who had come with her father, also a military officer, from the Caribbean. She took over managing the plantation when he was assigned elsewhere. Indigo became an important commodity crop for the dyeing of textiles. Slave labor was integral to the economic success of rice and indigo as commodity crops. In South Carolina, the number of slaves exceeded those of Anglo-European colonists by the time of the Revolution, a characteristic of the state through the American Civil War.

On March 26, 1776, the colony set up its own provisional government under the leadership of South Carolina President John Rutledge. On February 5, 1778, South Carolina became the first state to ratify the Articles of Confederation, the initial governing document of the United States. However, in 1780, South Carolinian loyalists to the British crown helped British troops recapture South Carolina from the previously successful rebels. On January 17, 1781, the Battle of Cowpens won by the American forces, marked the beginning of the decline in British fortunes. In 1782 they decided to evacuate their troops by the end of the year. Thousands of Loyalists and slaves left with them.

The current United States Constitution was proposed for adoption by the States on September 17, 1787, and South Carolina was the 8th state to ratify it, on May 23, 1788.

The American Revolution caused a shock to slavery in the South. Many thousands of slaves fled to British authorities to obtain freedom; and many of those left with the British in the last days of the war. Others secured their freedom by escaping to perceived friendlier locations during the turmoil. Estimates are that 25,000 slaves (30% of those in South Carolina) fled, migrated or died during the disruption of the war. 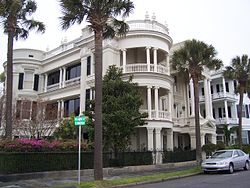 This historic home is at “The Battery,” a neighborhood/park area at the Downtown historic district of Charleston – a well-known historical city in South Carolina. “The Battery” is also known as White Point Gardens.

South Carolina politics between 1783 and 1795 were marred by rivalry between a Federalist elite supporting the central government in Philadelphia and a large proportion of common people. The latter were often members of ‘Republican Societies’, and they supported the Republican-Democrats, headed by Jefferson and Madison. This party wanted more democracy in the US, especially in South Carolina.

Most people supported the French Revolution (1789–1795), as the French had been allies and they were proud of their own revolution. Charleston was one of the most French-influenced cities in the USA. Leading South Carolina figures, such as governors Charles Pinckney and William Moultrie, backed with money and actions the French plans to further their political, strategic, and commercial goals in North America. This pro-French stance and attitude of South Carolina ended soon because of the XYZ Affair. 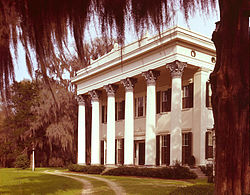 Millford Plantation (1839–41), one of the best examples of Greek Revival architecture in the United States

Antebellum South Carolina did more to advance nullification and secession than any other Southern state. In 1832, a South Carolina state convention passed the Ordinance of Nullification, declaring the Federal tariff laws of 1828 and 1832 unconstitutional, null and not to be enforced in the state of South Carolina after February 1, 1833. This led to the Nullification Crisis, in which U.S. President Andrew Jackson received congressional authorization, through the Force Bill, to use whatever military force necessary to enforce Federal law in the state. This was the first U.S. legislation denying individual states the right to secede. As a result of Jackson’s threat of force, the South Carolina state convention was re-convened and repealed the Ordinance of Nullification in March.

Anti-abolitionist feelings ran strong in South Carolina. In 1856, South Carolina congressman Preston Brooks entered the United States Senate chamber and, with a metal-tipped cane, beat Massachusetts Senator Charles Sumner. He drew blood and injured Sumner badly enough that the latter was unable to serve for several months. Brooks was retaliating for a speech Sumner had just given in which he attacked slavery and insulted South Carolinians. Brooks resigned his seat but received a hero’s welcome on returning home.

On December 20, 1860, when it became clear that Abraham Lincoln would be the next president, South Carolina became the first state to declare its secession from the Union. On April 12, 1861, Confederate batteries began shelling Fort Sumter in Charleston Harbor, and the American Civil War began. The Union Navy effectively blockaded Charleston and seized the Sea Islands. Planters had taken their families (and sometimes slaves) to points inland for refuge.

The Union Army set up an experiment in freedom for the ex-slaves, in which they started education and farmed land for themselves. South Carolina troops participated in major Confederate campaigns, but no major battles were fought inland. General William Tecumseh Sherman marched through the state in early 1865, destroying numerous plantations, and captured the state capital of Columbia on February 17. Fires began that night and by next morning, most of the central city was destroyed. 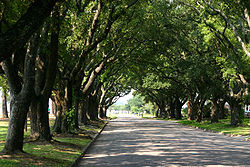 Coastal towns and cities often have hurricane-resistant Live oaks overarching the streets in historic neighborhoods, such as these on East Bay Street, Georgetown.

After the war, South Carolina was restored to the United States during Reconstruction. Under presidential Reconstruction (1865–66), freedmen (former slaves) were given limited rights. Under Radical reconstruction (1867–1877), a Republican coalition of freedmen, carpet baggers and scalawags was in control, supported by Union Army forces. The withdrawal of Union soldiers as part of the Compromise of 1877 ended Reconstruction. White Democrats used paramilitary groups such as the Red Shirts to intimidate and terrorize black voters. They regained political control of the state under conservative white “Redeemers” and pro-business Bourbon Democrats. 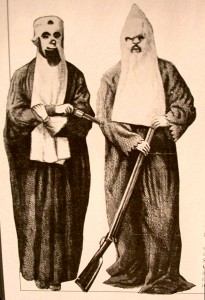 Ku Klux Klan Act.  Led by Grant’s Attorney General Amos T. Akerman, hundreds of Klansmen were arrested while 2000 Klansmen fled the state.   This was done in order to suppress Klan violence against African American and white voters in the South.