Welcome to the National Museum of American History

This video provides an overview of the iconic artifacts, stimulating exhibitions, engaging programs, and other amenities visitors encounter on a visit to the Smithsonian’s National Museum of American History. For more information please visit: http://americanhistory.si.edu.

The Smithsonian American Art Museum (commonly called American Art) is a museum in Washington, D.C. which has one of the world’s largest and most inclusive collections of art, from the colonial period to the present, made in the United States. The museum has more than 7,000 artists represented in the collection, which contains the largest collection of New Deal art; a collection of contemporary craft, American impressionist paintings, and masterpieces from the Gilded Age; photography, modern folk art, works by African American and Latino artists, images of western expansion, and realist art from the first half of the twentieth century.

The museum provides electronic resources to schools and the public through its national education program, including Artful Connections, real-time video conference tours.

The museum maintains seven online research databases with more than 500,000 records, including the Inventories of American Painting and Sculpture that document more than 400,000 artworks in public and private collections worldwide.

The museum (since 1951) has maintained a traveling exhibition program; as of 2013, more than 2.5 million visitors have seen the exhibitions. 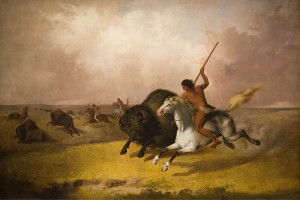 The American Art’s main building, a National Historic Landmark located in Washington, DC’s downtown cultural district, has been renovated with expanded permanent-collection galleries and public spaces.  The Luce Foundation Center for American Art is a visible art storage and study center, which allows visitors to browse more than 3,300 works of the collection.  The Lunder Conservation Center is “the first art conservation facility to allow the public permanent behind-the-scenes views of the preservation work of museums.” In 2008, the American Alliance of Museums awarded reaccreditation to the Smithsonian American Art Museum.  As of 2013, Elizabeth Broun is Director of the museum.

American Art has maintained a traveling exhibition program since 1951.  During the 2000’s renovation, a “series of exhibitions of more than 1,000 major artworks from American Art’s permanent collection traveled to 105 venues across the United States,” which were “seen by more than 2.5 million visitors.” Since 2006, thirteen exhibitions have toured to more than 30 cities.

American Art provides electronic resources to schools and the public as part of education programs such as Artful Connections. Artful Connections gives real-time video conference tours of American Art.  Also, the Clarice Smith National Teacher Institutes offers several professional development programs in which educators learn to integrate art across the curriculum using online applications.  American Art has seven online research databases, which has more than 500,000 records of artworks in public and private collections worldwide, including the Inventories of American Painting and Sculpture.  Numerous researchers and millions of virtual visitors per year use these databases.  Also, American Art and Heritage Preservation work together in a joint project, Save Outdoor Sculpture, “dedicated to the documentation and preservation of outdoor sculpture.”  The museum produces a peer-reviewed periodical, American Art (started in 1987), for new scholarship.  Since 1993, American Art has been had an online presence.  It has one of the earliest museum websites when, in 1995, it launched its own website.  EyeLevel, the first blog at the Smithsonian Institution, was started in 2005 and, as of 2013, the blog “has approximately 12,000 readers each month.” 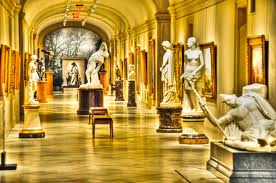 American Art’s main building, the Old Patent Office Building, is a National Historic Landmark and is considered an example of Greek Revival architecture  in the United States.  It was designed by architects Robert Mills,  and Thomas U. Walter. During the 1990s, the Smithsonian Institution worked on restoring the building.  The 2000-2006 renovation included restoring the porticos modeled after the Parthenon in Athens, a curving double staircase, colonnades, vaulted galleries, large windows, and skylights as long as a city block.  According to the Smithsonian Institution, “Extraordinary effort was made to use new preservation technologies to restore the historic fabric of the building and re-use historic materials.”  During the renovation, the Lunder Conservation Center, the Luce Foundation Center for American Art, Nan Tucker McEvoy Auditorium, and the Robert and Arlene Kogod Courtyard were added to the building. 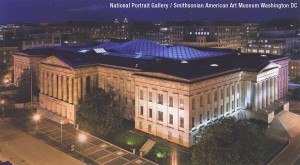 Part of the Smithsonian Institution, the museum has a broad variety of American art, with more than 7,000 artists represented, that covers all regions and art movements found in the United States. Among the significant artists represented in its collection are Nam June Paik, Jenny Holzer, David Hockney, Georgia O’Keeffe, John Singer Sargent, Albert Pinkham Ryder, Albert Bierstadt, Edmonia Lewis, Thomas Moran, James Gill, Edward Hopper, Karen LaMonte and Winslow Homer.  The museum describes itself as being “dedicated to collecting, understanding, and enjoying American art. The museum celebrates the extraordinary creativity of artists whose works reflect the American experience and global connections.” 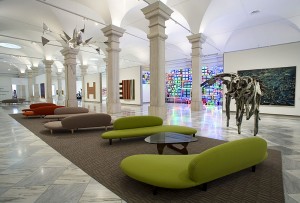 View of the Lincoln Gallery at the Smithsonian American Art Museum

The Smithsonian completed another renovation of the building in July 1, 2006.  Washington D.C.-based Hartman-Cox Architects oversaw the project, which restored many of the building’s exceptional architectural features, such as the porticos, a curving double staircase, colonnades, vaulted galleries, large windows, and skylights as long as a city block.  The renovation was funded by the Donald W. Reynolds Foundation, the Luce Family and other noteworthy patrons of the arts donated about US$ 117 million dollars.  The renovation lasted six and a half years and cost approximately US$ 283 million dollars.  On November 18, 2007, the central courtyard opened with a new, curved glass canopy designed by British architect Lord Norman Foster of the architectural firm Foster + Partners.

The Smithsonian American Art Museum shares its historic building with the National Portrait Gallery, another Smithsonian museum. Although the two museums’ names have not changed, they are collectively known as the Donald W. Reynolds Center for American Art and Portraiture.

The museum has two innovative public spaces, the Luce Foundation Center for American Art and the Lunder Conservation Center. 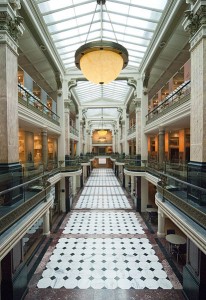 The Luce Foundation Center, which opened in July 2000, is the first visible art storage and study center in Washington, D.C. and the fourth center to bear the Luce Family name.  It presents more than 3,300 objects in 64 secure glass cases, which quadruples the number of artworks from the permanent collection on public view.  The purpose of open storage is to allow patrons to view various niche art that is usually not part of a main exhibition or gala special.  It has 20,400 square feet on the third and fourth floors of American Art Museum.  The Luce Foundation Center features paintings densely hung on screens, sculptures, crafts and folk art objects arranged on shelves, and miniatures and medals in drawers that open.  Large-scale sculptures are installed on the first floor.  The Center has John Gellatly’s European collection of decorative arts.  Interactive computer kiosks provide the public with information about every object on display, including a discussion of each artwork, artist biographies, audio interviews, video clips and still images.

The center displays between 160 to 264 art medals in movable drawers. The displays contain:

The Lunder Conservation Center, which opened in July 2000, is the first art conservation facility that allows the public permanent behind-the-scenes views of preservation work.  Conservation staff are visible to the public through floor-to-ceiling glass walls that allow visitors to see firsthand all the techniques which conservators use to examine, treat, and preserve artworks.  The Lunder Center has five conservation laboratories and studios equipped to treat paintings, prints, drawings, photographs, sculptures, folk art objects, contemporary crafts, decorative arts and frames.  The Center uses various specialized and esoteric tools, such as hygrothermographs, to create optional temperature and humidity to preserve art works.  Staff from both the Smithsonian American Art Museum and the National Portrait Gallery work in the Lunder Center. 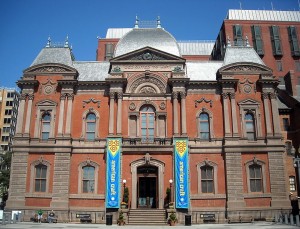 The Renwick Gallery is located on Pennsylvania Avenue.

Also under the auspices of the Smithsonian American Art Museum, the Renwick Gallery is a smaller, historic building on Pennsylvania Avenue across the street from the White House.  The building originally housed the collection of the Corcoran Gallery of Art.  In addition to displaying a large collection of American contemporary craft, several hundred paintings from the museum’s permanent collection — hung salon style: one-atop-another and side-by-side — are featured in special installations in the Grand Salon.

In 2008, the American Art Museum hosted an alternate reality game, called Ghosts of a Chance, which was created by City Mystery.  The game allowed patrons “a new way of engaging with the collection” in the Luce Foundation Center.  The game ran for six weeks and attracted more than 6,000 participants.