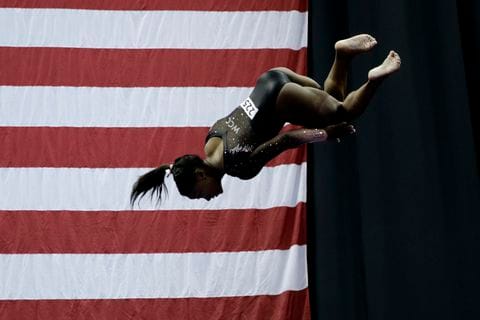 KANSAS CITY, Mo. — It was Simone Biles they came to see. If there were any doubt, the answer was in the decibels of the squeals and shrieks that shot through the rafters of Sprint Center each time her name was announced:

At 22, Biles had not lost an all-around competition in six years.

And the 2019 U.S. Gymnastics Championships were no different — especially Sunday night, the final night of the two-day event, in which Biles aced a skill no other woman (and only two men in the world) has successfully landed in competition — a triple-twisting, double somersault that capped the first tumbling pass of her floor routine like a cymbal crash.

Biles had overcooked it Friday, needing to put both hands on the mat to keep from falling. In a competition one month earlier, she had stepped out of bounds.

On Sunday, even though the reigning Olympic and world champion knew she had nailed the tornado-like triple-double of twists and flips, she grabbed her cellphone immediately after coming off the mat, found an instant video clip, showed it to her coach and retweeted it — all in time to compose herself before competing on vault.

“I’m just happy that I landed it,” Biles said afterward. “After Night 1, my confidence got shot down, so I was really worried about it going into today. That’s all I could worry about.”

On the heels of that and numerous other feats, Biles claimed a record-tying sixth U.S. championship, winning the all-around title with 118.500 points — 4.950 points over her nearest competitor, silver medalist Sunisa Lee (113.550). Grace McCallum took bronze (111.850).

Gaining the most ground on the final night in the all-around was 2017 world champion Morgan Hurd, who finished fourth after standing eighth at the midpoint. To read more go to the link below: