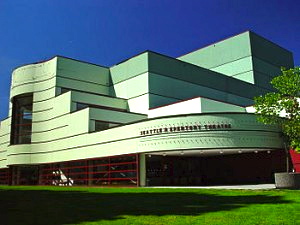 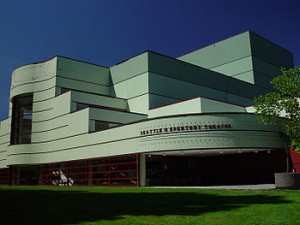 Seattle Repertory Theatre (familiarly known as “The Rep”) is a major regional theatre located in Seattle, Washington, at the Seattle Center.   It is a member of Theatre Puget Sound  and Theatre Communications Group.   Founded in 1963, it is led by Artistic Director Jerry Manning and Managing Director Benjamin Moore.   It received the 1990 Regional Theatre Tony Award. 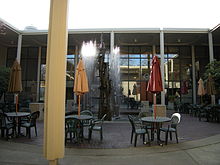 The first home of the Seattle Rep was the Seattle Playhouse, built as part of the fair grounds for the 1962 Century 21 Exposition, Seattle’s 1962 World’s Fair.  The building, extant as of 2009, was renovated in 1987 as a home for the Intiman Theatre.   Actor Hal Holbrook had appeared at the Playhouse during the fair, and is believed to be the person who suggested it as a home for a repertory theater company.   Seattle businessman and arts patron Bagley Wright and others raised money and recruited artistic leadership to found what became the Seattle Repertory Theater (“The Rep”).[7] Stuart Vaughan was the founding artistic director and directed the first production, King Lear, which opened the new company’s first season on November 14, 1963. The original acting company included Seattle native Marjorie Nelson and a young associate member from the University of Washington, John Gilbert. Both went on to become mainstays of Pacific Northwest theater. Donald Foster came aboard as executive director in 1964. The first summer “Theater-in-the-Park” production was The Taming of the Shrew. The first Northwest tour included Twelfth Night and Ah, Wilderness! by Eugene O’Neill. Peter Donnelly joined The Rep on a Ford Foundation grant as a management intern. In 1966, Allen Fletcher became The Rep’s second artistic director. The “Off-Center” series (held at other local theaters outside Seattle Center) focused on contemporary works. The first of “Off-Center” production, in 1967, featured The Death of Bessie Smith and The American Dream, two one-act plays by Edward Albee. The Rep was invited to the Bergen International Festival in 1968.

In 1970, Peter Donnelly became producing director, and W. Duncan Ross became artistic director. In 1972, The Rep’s artistic role in the state was acknowledged with the Washington State Governor’s Arts Award. That same year was the beginning of “Rep ‘n’ Rap”, a summer tour program featuring Thurbermania. The following year, there was a special presentation of Promenade All directed by Hume Cronyn. “The 2nd Stage” series began a year later with Max Frisch‘s Biography. In 1975, a tour of the western states included Seven Keys to Baldpate by George M. Cohan. Private funding and a city-wide bond issue raised $5.8 million for a new theater, which was begun in 1977 and completed in 1983. The first “Mobile Outreach Bunch” (MOB) toured Washington and Idaho schools with The Energy Show, launching The Rep’s education programs in 1979. John Hirsch joined as consulting artistic director with Daniel Sullivan as resident director that same year, and “Plays-in-Progress,” initiated by Daniel Sullivan, began developing new plays.