The Proud History of the Republican Party

The Republican Party, also commonly called the GOP (for “Grand Old Party”), is one of the two major contemporary political parties in the United States, the other being the Democratic Party. Founded by anti-slavery activists in 1854, it dominated politics nationally for most of the period from 1860 to 1932. There have been 18 Republican presidents, the first being Abraham Lincoln, serving from 1861 to 1865, and the most recent being George W. Bush, serving from 2001 to 2009. The most recent Republican presidential nominee was former Massachusetts Governor Mitt Romney. 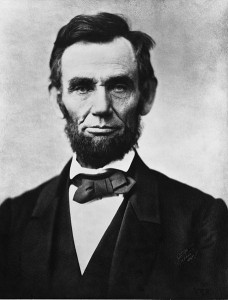 Founded in the Northern states in 1854 by anti-slavery activists, modernizers, ex-Whigs, and ex-Free Soilers, the Republican Party quickly became the principal opposition to the dominant Southern Democratic Party and the briefly popular Know Nothing Party. The main cause was opposition to the Kansas–Nebraska Act, which repealed the Missouri Compromise by which slavery was kept out of Kansas. The Northern Republicans saw the expansion of slavery as a great evil. The first public meeting where the name “Republican” was suggested for a new anti-slavery party was held on March 20, 1854 in a schoolhouse in Ripon, Wisconsin.

The first official party convention was held on July 6, 1854, in Jackson, Michigan. By 1858, the Republicans dominated nearly all Northern states. The Republican Party first came to power in 1860 with the election of Lincoln to the Presidency and Republicans in control of Congress and again, the Northern states. It oversaw the saving of the union, the end of slavery, and the provision of equal rights to all men in the American Civil War and Reconstruction, 1861–1877.

The Republicans’ initial base was in the Northeast and the upper Midwest. With the realignment of parties and voters in the Third Party System, the strong run of John C. Fremont in the 1856 Presidential election demonstrated it dominated most northern states.

Early Republican ideology was reflected in the 1856 slogan “free labor, free land, free men”, which had been coined by Salmon P. Chase, a Senator from Ohio (and future Secretary of the Treasury and Chief Justice of the United States).  “Free labor” referred to the Republican opposition to slave labor and belief in independent artisans and businessmen. “Free land” referred to Republican opposition to plantation system whereby slaveowners could buy up all the good farm land, leaving the yeoman independent farmers the leftovers. The Party strived to contain the expansion of slavery, which would cause the collapse of the slave power and the expansion of freedom.

Lincoln, representing the fast-growing western states, won the Republican nomination in 1860 and subsequently won the presidency. The party took on the mission of saving the Union and destroying slavery during the American Civil War and over Reconstruction. In the election of 1864, it united with War Democrats to nominate Lincoln on the National Union Party ticket.

The party’s success created factionalism within the party in the 1870s. Those who felt that Reconstruction had been accomplished and was continued mostly to promote the large-scale corruption tolerated by President Ulysses S. Grant ran Horace Greeley for the presidency. The Stalwarts defended Grant and the spoils system; the Half-Breeds pushed for reform of the civil service.

Nevertheless, by 1890 the Republicans had agreed to the Sherman Antitrust Act and the Interstate Commerce Commission in response to complaints from owners of small businesses and farmers. The high McKinley Tariff of 1890 hurt the party and the Democrats swept to a landslide in the off-year elections, even defeating McKinley himself.

After the two terms of Democrat Grover Cleveland, the election of William McKinley in 1896 is widely seen as a resurgence of Republican dominance and is sometimes cited as a realigning election. McKinley promised that high tariffs would end the severe hardship caused by the Panic of 1893, and that the GOP would guarantee a sort of pluralism in which all groups would benefit. 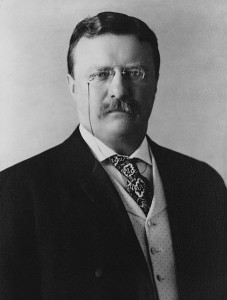 The Republicans were cemented as the party of business, though mitigated by the succession of Theodore Roosevelt who embraced trust busting. He later ran on a third party ticket of the Progressive Party and challenged his previous successor William Howard Taft. The party controlled the presidency throughout the 1920s, running on a platform of opposition to the League of Nations, high tariffs, and promotion of business interests.

Warren G. Harding, Calvin Coolidge and Herbert Hoover were resoundingly elected in 1920, 1924, and 1928 respectively. The Teapot Dome scandal threatened to hurt the party but Harding died and Coolidge blamed everything on him, as the opposition splintered in 1924. The pro-business policies of the decade seemed to produce an unprecedented prosperity until the Wall Street Crash of 1929 heralded the Great Depression.

The New Deal coalition of Democrat Franklin D. Roosevelt controlled American politics for most of the next three decades, excepting the two-term presidency of Republican Dwight D. Eisenhower. African Americans moved into the Democratic Party during Roosevelt’s time.  After Roosevelt took office in 1933, New Deal legislation sailed through Congress at lightning speed. In the 1934 midterm elections, 10 Republican senators went down to defeat, leaving them with only 25 against 71 Democrats. The House of Representatives was split in a similar ratio.

Republicans in Congress heavily criticized the “Second New Deal” and likened it to class warfare and socialism. The volume of legislation, and the inability of the Republicans to block it, soon elevated the level of opposition to Roosevelt. Conservative Democrats, mostly from the South, joined with Republicans led by Senator Robert Taft to create the conservative coalition, which dominated domestic issues in Congress until 1964. The Republicans recaptured Congress in 1946 after gaining 13 seats in the Senate and 55 seats in the House. 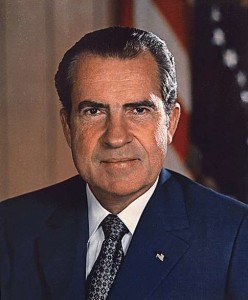 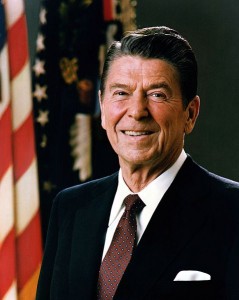 The second half of the 20th century saw election or succession of Republican presidents Dwight D. Eisenhower, Richard Nixon, Gerald Ford, Ronald Reagan, George H. W. Bush and George W. Bush. Today, Reagan remains one of the nation’s most popular presidents, according to opinion polling. The Republican Party, led by House Republican Minority Whip Newt Gingrich campaigning on the Contract with America, was elected to majorities to both houses of Congress in the Republican Revolution of 1994.

The Senate majority lasted until 2001, when the Senate became split evenly but was regained in the 2002 elections. Both Republican majorities in the House and Senate were held until the Democrats regained control in the mid-term elections of 2006. The Republican Party has since been defined by social conservatism, a preemptive war foreign policy intended to defeat terrorism and promote global democracy, a more powerful executive branch, supply side economics, support for gun ownership, and deregulation. 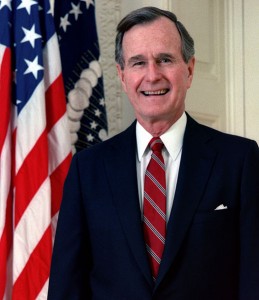 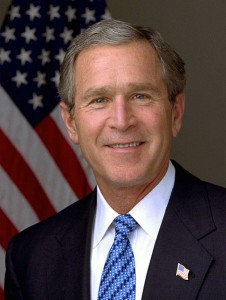 In the Presidential election of 2008, the party’s nominees were Senator John McCain, of Arizona, for President and Alaska Governor Sarah Palin for Vice President. They were defeated by Senator Barack Obama of Illinois and SenatorJoe Biden of Delaware. In 2009, Republicans Chris Christieand Bob McDonnell were elected to the governorships of New Jersey and Virginia.

2010 was a year of political success for the Republicans, starting with the upset win of Scott Brown in the Massachusetts special Senate election for the seat held for many decades by the Democratic Kennedy brothers. In the November elections, Republicans recaptured control of the House, increased their number of seats in the Senate, and gained a majority of governorships.  Additionally, Republicans took control of at least 19 Democratic-controlled state legislatures.

In the Presidential election of 2012, the Republican nominees were former Governor Mitt Romney of Massachusetts for President, and Representative Paul Ryan of Wisconsin for Vice President. The Democrats nominated incumbent President Barack Obama of Illinois, and incumbent Vice President Joe Biden of Delaware. The campaign focused largely on Obama’s stewardship of the economy, with the country facing high unemployment numbers and a rising national debt four years after his first election. Romney and Ryan were defeated by Obama and Biden. In addition, in the November congressional elections, while Republicans lost 7 seats in the House, they retained control. However, Republicans were not able to gain control of the Senate, continuing their minority status with a net loss of 2 seats.