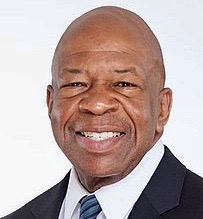 Elijah Eugene Cummings (January 18, 1951 – October 17, 2019) was an American politician and the member of the U.S. House of Representatives for Maryland’s 7th congressional district.[1] The district includes just over half of Baltimore City, most of the majority-black precincts of Baltimore County, as well as most of Howard County. He previously served in the Maryland House of Delegates. He was a member of the Democratic Partyand chair of the Committee on Oversight and Reform.

BALTIMORE — Congressman Elijah Cummings has died, according to a statement.

The Office of Congressman Cummings said he passed away at approximately 2:45 a.m. Thursday at John Hopkins Hospital in Baltimore, Maryland.

According to the statement, Cummings succumbed to “complications concerning longstanding health challenges.”

Cummings was the House Oversight Committee Chair and a long-serving Democratic congressman.

Cummings was born on January 18, 1951 in Baltimore, the son of Ruth Elma (Cochran) and Robert Cummings. He was the third child of seven. Cummings graduated with honors from the Baltimore City College high school in 1969. He later attended Howard University in Washington, D.C., where he served in the student government as sophomore class president, student government treasurer and later student government president. He became a member of the Phi Beta Kappa Society  and graduated in 1973 with a Bachelor‘s degree in Political Science.

Cummings graduated from law school at the University of Maryland School of Law, receiving his J.D. in 1976, and was admitted to the Maryland Bar later that year. He practiced law for 19 years before first being elected to the House in the 1996 elections.

Cummings has received 12 honorary doctoral degrees from universities across America, most recently an honorary doctorate of public service from the University of Maryland, College Park in 2017.

For 14 years, Cummings served in the Maryland House of Delegates. His predecessor, Lena King Lee, raised funds and campaigned for him; years later, Cummings credited her with launching his political career. In the Maryland General Assembly, he served as Chairman of the Legislative Black Caucus of Maryland and was the first African American in Maryland history to be named Speaker Pro Tempore, the second highest position in the House of Delegates.