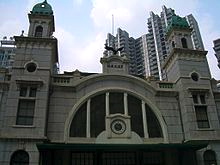 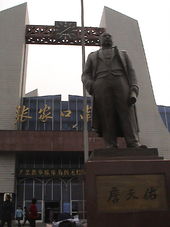 The statue of Zhan Tianyou, in Zhangjiakou south railway station

The first railroad in China, the Woosung Road began service in July 1876, connecting the edge of Shanghai‘s American Concession in the present-day Zhabei District with Woosung in the present-day Baoshan District. Built by Jardine & Matheson without approval from the Qing government, it was purchased by the Chinese viceroy Shen Baozhen and dismantled in October 1877, its rails and rolling stock being shipped to Taiwan.

The second railway in China was a 10 km railway from Tangshan to Xugezhuang (Kaiping Tramway and Imperial Railways of North China), built in 1881 to transport coal from the coal mine in Tangshan. As was the case in Shanghai, many officers in the Qing government opposed building this railway. Fortunately, the railway was backed by the powerful Viceroy of Zhili, Li Hongzhang, and survived. Nevertheless, further extension of this railway was delayed due to the opposition. The western extension from Xugezhuang to Tianjin was finished by 1888. The eastern extension started from Tangshan, and by 1894, it had reached Shanhaiguan andSuizhong. This railway was then called “Guanneiwai Railway” (literally, inner and outer Shanhaiguan railway).

The next effort was made by Taiwan Governor Liu Mingchuan. From 1887 to 1893, 107 km of railway tracks were laid from Keelungto Taipei to Hsinchu. However, this railway was later demolished for modernization when Taiwan was under Japanese rule. 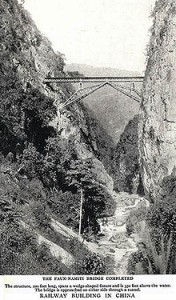 The Faux Namti Bridge on the Yunnan–Vietnam Railway was built by France in 1906.

The Qing’s defeat in the First Sino-Japanese War was a tragedy to China. Ironically, it stimulated the nation’s railway development. On one hand, the emperor and the court officers finally understood the importance of the railway transportation during this war. On the other hand, the Qing government became so weak after the war that it was forced by the great powers to grant permissions to construct railways in China as well as many privileges, such as settlement or mining along the railway. By 1911, there were around 9,000 km of rails in China. Most of the rails used the standard gauge (1,435 mm). 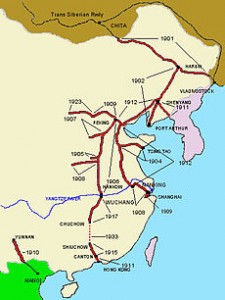 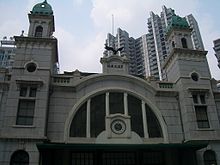 Jingzhang railway (from Beijing to Zhangjiakou) was the first railway designed and constructed by Chinese in 1905-1909. This railway crossed the rugged mountains in the north of Beijing. The chief engineer was Zhan Tianyou. He is called the Father of China’s Railways.

Jiaoji Railway (Qingdao to Jinan in Shandong) was built by Germany and completed in 1904.

Sino-Vietnamese Railway was a 855 km railway built by France during 1904–1910, connecting Haiphong, Vietnam with Kunming. The section within China from Kunming to Hekou is 466 km and the section within Vietnam is 389 km. This railway used 1,000 mm gauge due to the mountain terrain along the route. Currently, it is the only main line in China using narrow gauge.

Shanghai to Nanjing railway was built in 1905–1908. Construction of the 189 km railway between Shanghai and Hangchow (now Hangzhou) was completed in 1909.

The Kowloon-Canton Railway was completed in 1911, connecting the southern city of Canton (now Guangzhou) with Kowloon in the then British crown colony of Hong Kong.

The Chinese Eastern Railway was a single-tracked line extending (and shortening) the famous world’s longest railroad, the Trans-Siberian Railway, from near the Siberian city of Chita via Harbin across northern inner Manchuria to the Russian port of Vladivostok. This route drastically reduced the travel distance required along the original main northern route to Vladivostok (this original route lay completely outside China).

A construction concession was granted by China in 1896 through northern Inner Manchuria, running from near Chita via Harbin to Vladivostok, and construction was drastically accelerated after Russia concluded a twenty-five year lease of Liaodong from China.

At this same time in 1898, a 550-mile spur line, most of which later formed the South Manchuria Railway, was started from Harbin down through eastern Manchuria, along the Liaodong Peninsula, to the ice-free deep water port at Lüshun, a town almost at the tip of the peninsula, which Russia was fortifying and overhauling into a first class strategic naval base and marine coaling station for their Far Seas Fleet and Merchant Marine. This town was known in the west as Port Arthur.

The Chinese Eastern Railway was essentially completed in 1902, beating the stretch around Lake Baikal, by fourteen years. Until that portion was completed, cargo on the Trans-Siberian Railway had to be transshipped by ferry the 632 miles along the lake’s length.

During the Russo-Japanese War (1904–1905), Russia lost both Liaodong Peninsula and much of the South Manchurian branch of the railway to Japan. The rail line from Changchun to Lüshun transferred to Japanese control, and now became the South Manchuria Railway.

The original gauge used in the eastern railway was the Russia 1,520 mm broad gauge. Later, when Japan gradually took control this railway, the gauge was changed to the standard gauge (1,435 mm).

A train on South Manchuria Railway

The South Manchuria Railway Company was a company founded by Japan in 1906 after the Russo-Japanese War, and operated in Japanese-occupied Manchuria. The company was created when, in accordance with the Treaty of Portsmouth, the southernmost section (from Changchun to Lüshun) of the South Manchuria branch of the China Far East Railway was transferred to Japanese control along with the Kwantung Leased Territory. From 1906 or 1910 until 1925, the company also operated the Korean railway system.

The building of railways had profound effect on the society and politics of late imperial China. From the 1890s to 1905, nearly all railways in China were planned, financed, built and operated by foreign powers with concessions from the Qing Government. To help local economies develop and retain earnings from railways, the Qing government in 1904 permitted local provinces to organize their own railway companies and raise funds by selling shares to the public. The government in Sichuan, for example, also levied a special tax on land owners, who were given share certificates in the Sichuan-Hankou Railway Company. In May 1911, the Qing government sought to nationalize these locally controlled railway companies and pledge their railway concessions to foreign banks in exchange for loans. The nationalization order provoked fierce public opposition that led to the Railway Protection Movement, which contributed to the outbreak of the Xinhai Revolution. Troops sent to Sichuan from neighboring Hubei weakened defenses in Wuhan where revolutionaries launched the Wuchang Uprising. After founding the Republic of China on January 1, 1912, Dr. Sun Yat-sen agreed to cede the provisional presidency to Yuan Shikai in exchange for the latter’s assistance in securing the abdication of Qing court. Sun believed that a national railway network was key to the modernization of China. He sought and received from Yuan Shikai, the portfolio of railway development the new republic.