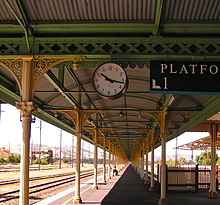 Some old footage from Roma Street station in Brisbane. Trains talk like they do in Thomas the Tank Engine.

Following the British model, Australians generally assumed in the 1850s that railways would be built by the private sector. Private companies built railways in the then colonies of Victoria, opened in 1854, and New South Wales, where the company was taken-over by the government before completion in 1855, due to bankruptcy. South Australia‘s railways were government owned from the beginning, including a horse-drawn line opened in 1854 and a steam-powered line opened in 1856. In Victoria, the private railways were soon found not to be financially viable, and existing rail networks and their expansion was taken over by the colony. Government ownership also enabled railways to be built to promote development, even if not apparently viable in strictly financial terms. The railway systems spread from the colonial capitals, except in cases where geography dictated a choice of an alternate port.

Railways in Australia date from the 10 December 1831 when the Australian Agricultural Company officially opened Australia’s first railway, located at the intersection of Brown & Church Streets, Newcastle, New South Wales. Privately owned and operated to service the A Pit coal mine, it was a cast iron fishbelly rail on an inclined plane as a gravitational railway.

The colonial railways were built to three different gauges, which became a problem once lines of different systems met at Albury, New South Wales in 1881 and Wallangarra, Queensland in 1888. In the 20th century, the lines between major cities were converted to standard gaugeand electrified suburban networks were built in Sydney, Melbourne, Brisbane and Perth. In the second half of the 20th century, many rural branch lines were closed to passenger traffic or altogether in all states. On the other hand, long heavy-haul railways were built to transport iron ore in Western Australia and coal in Queensland to ports. In Western Australia these railways are privately owned.

In the 1990’s and the early 21st century, the traditional networks were reorganised and partially privatised. The interstate standard gauge network came largely under the control of the Australian Rail Track Corporation and private companies were allowed to operate on it for the first time. Some non-metropolitan intrastate networks became privately controlled and the operation of private freight and passenger trains commenced. Queensland Rail was left as the only government-owned operator of freight or rural passenger trains. The Melbourne suburban railways became the first urban rail system to be operated by private sector franchisees. 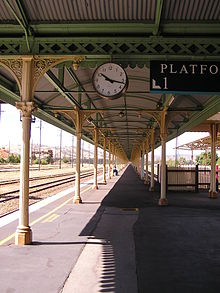 As originally New South Wales and Victoria had different railway gauges, this meant that all travellers in either direction had to change trains at Albury. To accommodate these changes, a very long railway platform was needed; the covered platform is one of the longest in Australia.

Railways in Australia date from the 10 December 1831 when the Australian Agricultural Company officially opened Australia’s first railway, located at the intersection of Brown & Church Streets, Newcastle, New South Wales. Privately owned and operated to service the A Pit coal mine, it was a cast iron fishbelly rail on an inclined plane as agravitational railway.

The earliest railway in South Australia consisted of the seven-mile horse-drawn freight line between Goolwa and Port Elliot in South Australia, which began service on 18 May 1854, allowing steam ships to avoid the treacherous mouth of the Murray River.   The first steam locomotive began service soon afterward between Sandridge (now Port Melbourne), and Flinders Street, Melbourne.

In 1848, the Sydney Railway Company was established to connect Goulburn and Bathurst to Sydney, mainly to convey wool for export to the United Kingdom. It had considerable difficulty raising sufficient funds to commence construction and none of the proposed standard gauge (4 ft 8 1⁄2 in (1,435 mm)) line was opened until 1855, when the line was opened between Sydney and Granville in what is now Sydney’s western suburbs, the first section of what is now the Main Southern line. In fact, the Sydney Railway Company went bankrupt building it and as a result the line was taken over by the government, leading to the establishment of the New South Wales Government Railways. Part of the reason for the delay in starting construction and the Company’s eventual bankruptcy and was the start of the Australian gold rushes in 1851—these created a labour-shortage and forced up prices.   In fact the railway did not reach Goulburn until 1869 and Bathurst until 1876, both lines having had to cross difficult topography.

Victoria was the main beneficiary of the gold rushes, with the major discoveries in Victoria and Bendigo (then called Sandhurst) in 1851. While this also created a labor shortage in Victoria, it also caused great development in Melbourne, first settled in 1835 and declared a city in 1847. As a result Australia’s first steam-powered railway was a suburban line opened by the Melbourne and Hobson’s Bay Railway Company from Melbourne to Sandridge (now Port Melbourne) in 1854.   This line and almost all subsequent Victorian lines were built to broad gauge (5 ft 3 in (1,600 mm), gauge). In 1856, the government-owned South Australian Railwaysopened its first line (1600 mm gauge) from Adelaide to Port Adelaide.   The three major Australian colonies at the time failed to follow advice from the British Government to adopt a uniform gauge in case the lines of the various states should ever meet. The original Irish engineer, Sir Francis Shields persuaded the Parliament of New South Wales to require that all railways in the colony be of the Irish broad gauge. Subsequently a Scots engineer persuaded the legislature to change to standard gauge. Unfortunately New South Wales failed to inform Victoria and South Australia of the change until, after the other states had ordered broad gauge rolling-stock. Both states subsequently refused to follow this change.

Queensland’s first line (3 ft 6 in (1,067 mm) gauge—known in Australia as “narrow gauge“) from Ipswich to Bigge’s Camp, the first stage of a railway between Brisbane and Toowoomba, opened in 1865.   This gauge was intended to save money and was subsequently followed by Tasmania and Western Australia.   As a result, in the middle of the 20th century Australia had almost equal amounts of each gauge. Tasmania’s first (1600 mm gauge) line opened in 1871 from Deloraine to Launceston and was converted to 1067 mm gauge in 1888. Finally, Western Australia opened its first Government-owned line in 1879 between Geraldton and Northampton. Lines spread in all the states from these first lines, connecting ports to farmland and ports.

The mainline systems of New South Wales, Victoria, South Australia and Queensland met (albeit with three breaks of gauge) in the 1880s. Only Victoria and South Australia shared a common gauge, and even so they opted to change engines at the border. The other mainland colony, Western Australia, was isolated by 2,000 km of desert. The first break of gauge was created when the New South Wales and Victorian lines met at Albury in 1883.   The railways of Victoria and South Australia meet at Serviceton in 1887, but these lines were both broad gauge.   In 1888 the railways of New South Wales and Queensland meet at Wallangara.   Meanwhile, in 1889, the first line (1067 mm gauge) in the Northern Territory was opened from Darwin to Pine Creek. In 1914, an eight kilometre extension of the New South Wales Railways from Queanbeyan to Canberra was opened to create the Australian Capital Territory‘s first and only line.

New South Wales’ railways date from the 10 December 1831 when the Australian Agricultural Company officially opened Australia’s first railway, located at the intersection of Brown & Church Streets, Newcastle, New South Wales. Privately owned and operated to service the A Pit coal mine, it was a cast iron fishbelly rail on an inclined plane as a gravitational railway

New South Wales’ railways were standard gauge lines built to connect the ports of Sydney and Newcastle to the rural interior. The first public railway was built from Sydney to Parramatta Junction and after two decisions to change the rail gauge, problems in raising capital and difficulties in construction, the line was opened in 1855.   The Main Southern line was built in stages from Parramatta Junction to the Victorian border at Albury between 1855 and 1881 and connected to the Victorian Railways at a break-of-gauge in 1883.   The standard gauge connection from Albury to Melbourne was finally completed in 1962.   Meanwhile, theMain Western line was built in stages to the north west of the state, starting in 1860 at Parramatta Junction and reaching Bourke in 1885.

The Main North line was built in sections over several years. The Sydney to Newcastle section was connected with the conclusion of the final 2 stages, Mullet Creek to Gosford (opened 16 January 1888) and Hawkesbury to Mullet Creek (opened 1 May 1889), of the Homebush to Waratah line, these final 2 stages required the construction of the Woy Woy Tunnel and the original Hawkesbury River Railway Bridge.   The Newcastle to Wallangarra section was constructed between 1857 and 1888 with a break-of-gaugerequired at the New South Wales & Queensland border.   The North Coast railway line, constructed between 1905 and 1932 with the completion of the Grafton Bridge, brought about the closure of the northern end of the Main North line at the Maitland junctiondue to its shorter distance.

The last main line, the Broken Hill line was completed to Broken Hill in 1927, connecting with the South Australian Railways at a break of gauge.   Meanwhile branch lines proliferated over the settled east of the state, including the Illawarra line to Wollongongand Nowra completed in 1893.   In 1926 work began on electrifying Sydney’s urban railways and connecting them together via new lines. 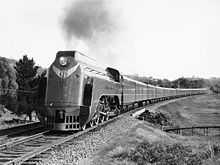 Premier express train of the Victorian Railways, the Spirit of Progress in 1937

A VLocity train, part of the Regional Fast Rail project Further information: Rail transport in Victoria, and Railways in Melbourne

Victoria’s first railway was a suburban railway opened from Melbourne to Port Melbournein 1854.   The Melbourne and Suburban Railway Company‘s line from Princes Bridge railway station to Punt Road (Richmond) opened in 1859.   In the same year the Geelong and Melbourne Railway Company opened its line from Melbourne to Geelong.   Subsequently the Victorian Railways built new railways to connect farming and mining communities to the ports of Melbourne, Geelong and Portland. In 1862 lines reached the great gold rush towns of Bendigo and Ballarat. In 1864 a line was opened to the Murray River port of Echuca.   In 1883 the first connection with another State’s rail system was made when the North East line was completed to the New South Wales Government Railways station at Albury, requiring a break-of-gauge to New South Wales’4 ft 8 1⁄2 in (1,435 mm) standard gauge Main Southern line.   In 1887, Victorian Railways met South Australian Railways at Serviceton, although both systems used broad gauge.

In 1919, electrification and development of the Melbourne suburban lines commenced. Minor extensions to suburban lines have continued, but patronage fell as road transport gained favour from the 1960s. In recent years, patronage has risen substantially, with more than 200 million trips on the network in 2007–2008.   In 1981, Melbourne’s only underground railway, the City Loop was opened.   On the country network, a large number of uneconomic branch line railways have been closed since the 1950s, leaving a skeleton network by the time of the Lonie Report of 1980. Privatisation of the Victorian railway network was carried out by the Kennett Government in the 1990s, with freight, suburban and country rail services split into separate companies. This was later followed by the Regional Fast Rail project that saw track upgrades, new trains, and an improved timetable to major regional cities.