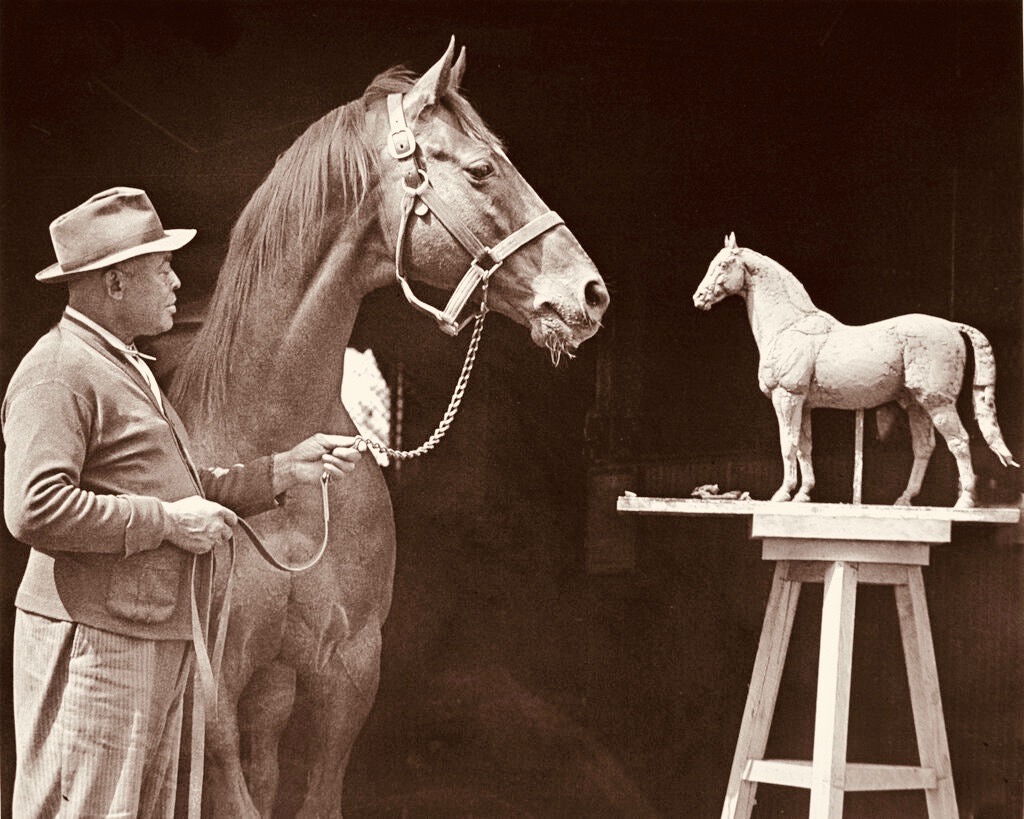 Greg Harbut’s great-grandfather Will cared for Man o’ War, one of the greatest racehorses. Credit…Keeneland Library

History of African American Jockeys: Pull Out of the Kentucky Derby? Pressure on a Black Owner Mounts by Joe Drape

In any other year, Greg Harbut would be enjoying the achievement of a lifetime. On Saturday, he will watch his horse Necker Island enter the starting gate for the 146th running of the Kentucky Derby, a moment of pride for a family that over the generations has built its success in the thoroughbred business.

His grandfather Tom bred and owned a horse that ran in the 1962 Derby, and his great-grandfather Will once graced the cover of The Saturday Evening Post alongside the magnificent athlete he cared for, the great Man o’ War.

But this isn’t like any other year. Harbut is the rare Black horse owner in a sport that is among the whitest in America. Now, he is hearing calls that he should boycott America’s most famous race.

With the Derby taking place at Churchill Downs, in Louisville, Ky., the city in which Breonna Taylor was fatally shot in her apartment in March, becoming a focus of the Black Lives Matter movement, a coalition of activist groups has called for a boycott of the race and its sponsors on Saturday. To read more go to the link below:

Possibly the most famous horse in history after Alexander the Great’s Bucephalus, Kincsem (“My Precious”) can be found at the top of many rankings of historic racehorses. Kincsem was a Hungarian Thoroughbred who recorded the most wins out of any undefeated racehorse in history, which puts her at the top of a short list of the most elite famous racehorses. She was foaled in 1874 and started racing two years later. She went on to win 54 races, ending her career undefeated.

Kincsem won classic races in the Austro-Hungarian Empire as well as major-stakes victories in Germany, France, and England. She ran her last race in 1879 in her native country of Hungary. During her career, she became legendary for winning the Goodwood Cup, the Grand Prix de Deauville, and the Grosser Preis von Baden in 1878. She became a point of national pride in her home country and still is to this day.

Kincsem was, without a doubt, one of the best racehorses of all time, her name permanently etched in the annals of history.

Black Caviar is another very successful Thoroughbred who went undefeated in her career. While Kincsem had 54 victories, Black Caviar won 25/25 of its starts, taking second place among history’s top Thoroughbreds.

She was foaled in 2006 in Nagambie, Victoria, Australia. Black Caviar was sired by Bel Esprit, a one-time winner of Australia’s Doomben 10,000. Like many of the best racehorses ever, Black Caviar had a high Timeform rating – 136 in the first quarter of 2011.

This mare ran an undefeated sprinter career from 2009 to 2013. Black Caviar was named the International Federation of Horseracing Authorities World Thoroughbred Racehorse Rankings champion springer four years in a row (2010-2013). She mostly participated in Australian races, running only one race abroad – the UK’s Royal Ascot Diamond Jubilee Stakes, which she won in 2012.

Even though she raced almost exclusively in Australia, Black Caviar gained worldwide recognition. She was named the European Champion Sprinter in 2012. A year later, Black Caviar was added to the Australian Hall of Fame, cementing her place in horse racing history.

Man o’ War was the expression used by the British Navy to refer to a powerful warship or frigate. When a racehorse bears the same name, you can be sure it is a force to be reckoned with. Widely considered one of the fastest horses in the history of racing, Man o’ War was voted the outstanding horse of the 20th century by the Associated Press, ESPN, and numerous other publications. He was inducted into the American Horse Racing Hall of Fame in 1957.

Man o’ War was a chestnut horse foaled in 1917 in Lexington, Kentucky. He had a distinctive white star and stripe on his forehead. He had 21 starts in his career, losing only one. During his career, he set three world records, two American ones, and three track records, which is why many consider him the best racehorse ever.

Due to a decision by his handicapper that it was too early in the year for the horse to race a mile and a quarter, and because the handicapper did not like racing in Kentucky, Man o’ War did not have the opportunity to run the Kentucky Derby, and therefore never won the Triple Crown. However, his offspring, War Admiral, did what his sire did not, winning the Triple Crown in 1937.