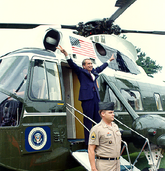 ON Aug. 9, 1974, Richard Nixon, the 37th president of the United States, resigned from office amid allegations that he was involved in a criminal plot to sabotage his political opponents during his re-election campaign. The scandal, known as “Watergate,” became for America the sad symbol of a decade of social and cultural upheaval.

Richard Millhouse Nixon was born in Yorba Linda, Calif. on Jan. 9. 1913. He grew up poor, but earned a scholarship to Harvard University. When his brother got tuberculosis, Nixon needed to help his mother run the family store, so he turned down the scholarship and attended nearby Whittier College. In 1934, he earned a scholarship to Duke University Law School and after graduation, he returned to Whittier to work as a lawyer. He met his wife, Pat, when the two were cast in the same play at a community theater. They had two daughters, Tricia and Julie.

In 1942, Nixon took a job in Washington, DC in the administration of President Franklin Delano Roosevelt. Shortly after, he enlisted in the Navy and served in World War II. After the war, the Republican Party in Whittier suggested he run for Congress. Nixon won the election. From Congress, Nixon was elected to the US Senate.

Nixon expanded the office of the eration. In 1962, he lost the campaign for Governor of California.

By the late 1960s, America was in turmoil. Young people were rejecting their parents’ values and lifestyles, and the country was bitterly divided over the Vietnam War. Nixon was regarded as an elder statesman who represented America’s traditional values, offering a voice of stability and foreign policy expertise. He was elected President of the United States in 1968. Nixon was running for a second term in office in 1972 when operatives with his campaign burglarized the headquarters of the Democratic National Committee. Although Nixon won re-election by a large margin, the crime was exposed and Nixon was eventually implicated in the investigation. He resigned rather than face impeachment (a Congressional procedure to remove a President from office). Nixon’s Vice President, Spiro Agnew, had been forced to resign from office due to unrelated scandals, so Gerald Ford replaced Nixon as President of the United States — the only President never to have been elected President or Vice President by the electoral college. Richard Nixon died on April 22, 1994. Vice Presidency, traveled the globe pushing a foreign policy of international engagement, and assumed important Presidential duties when Eisenhower’s health failed. The agreement Eisenhower crafted outlining Nixon’s duties should he become incapacitated became the foundation of the 25th Amendment to the Constitution.

In 1960, Nixon narrowly lost his first campaign for the Presidency to Sen. John F. Kennedy, who captured the hopes and dreams of the younger gen-