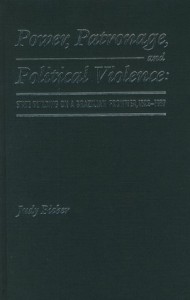 Judy Bieber explores the relationship between state centralization and municipal politics in Minas Gerais, Brazil, during the Imperial Period, 1822–89. She charts the nineteenth-century origins of coronelismo, a form of machine politics that linked rural power and patronage at the municipal level to state and federal politics. By highlighting the structural role of the municipality within the political system, Bieber provides a key to explaining Brazil’s so-called exceptionalism—its ability to maintain territorial and political cohesion within the framework of a constitutional monarchy instead of fragmenting violently, as did many Spanish republics. Despite the maintenance of national unity, political violence characterized much of Brazil’s political history, especially in the municipalities of its frontier regions. Historians have often attributed the chaotic nature of these politics to geographical isolation and decentralization of power. Bieber challenges these assumptions, arguing instead that state centralization was the primary factor contributing to political violence in Brazil’s frontier regions. The Brazilian national government centralized appointments of municipal authorities, thereby linking partisan affiliation on the periphery with provincial and national political parties. Local appointees corrupted and abused the mechanisms of social control in order to attain electoral victories for political patrons who had rewarded them with official jobs. This system produced escalating violence and promoted judicial impunity at the municipal level while simultaneously creating political stability at the provincial and federal levels. National discourse attributed political violence to a natural tendency possessed by rural elites in the uncivilized backlands. Municipal actors, however, belied prevailing stereotypes of ideological passivity and intellectual backwardness. In the press and in private correspondence they actively sought to define the terms of their political participation, developing their own conceptions of liberalism and ethical norms of political patronage.