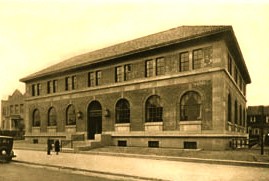 The city originated from a Dutch settlement on the Passaic River established in 1679 which was called Acquackanonk. Industrial growth began in the 19th century, as Passaic became a textile and metalworking center. Passaic was formed within Acquackanonk Township on March 10, 1869, and was incorporated as an independent village on March 21, 1871. Passaic was chartered as a city on April 2, 1873.

The 1926 Passaic Textile Strike led by union organizer Albert Weisbord had 36,000 mill workers leave their jobs to oppose wage cuts demanded by the textile industry. The workers successfully fought to keep their wages unchanged but did not receive recognition of their union by the mill owners.

Passaic has been called “The Birthplace of Television”  In 1931, experimental television station W2XCD began transmitting from DeForest Radio Corp. in Passaic. It has been called the first television station to transmit to the home, and was the first such station to broadcast a feature film. Allen B. DuMont, formerly DeForest’s chief engineer, opened pioneering TV manufacturer DuMont Laboratories in Passaic in 1937, and started the DuMont Television Network, the world’s first commercial television network, in 1946. The Okonite company began manufacturing electrical cable here in 1888, with early uses of the company’s insulated wires including some of the earliest telegraph cables and the wiring for Thomas Edison‘s Pearl Street Station in Lower Manhattan.

In 1992, the voters of Passaic Township in Morris County voted to change their town’s name to Long Hill Township, New Jersey, to avoid confusion between the City of Passaic and the largely rural community 22 miles (35 km) away, as well as association with the more urban City of Passaic.

The heritage of Jersey City’s African American community has been collected and preserved in a special collection at the  It is, according to former director Theodore Brunson, “New Jersey’s only museum devoted exclusively to the African-American experience” (Quoted in Point).

In 1977, Captain Thomas Taylor, president of the Jersey City Branch of the National Association for the Advancement of Colored People, promoted the idea to have an exhibit on Afro-American history and culture in Jersey City for February, Black History Month. Lay historian Brunson, with Nora Fant and Virginia Dunnaway, formed the Historical and Cultural Committee to fulfill that mission with the assistance of the NAACP. In 1984, the committee found permanent space for a museum as a separate nonprofit organization housed on the second floor of the library in Greenville. Now a consultant to the museum, Brunson was its first director to 1998. His son, Neal E. Brunson, Esq., presently serves as director.

The Main Library is an Italian Renaissance four-story building of granite and buff brick completed in 1901. The firm of Brite and Bacon of New York was selected from a competition of forty-seven entries to design the building. Norcross Brothers constructed the building for approximately $208,000.

The distinctive corner building in noted for the contrasting brick and large windows. A frieze with the Greek key is above the row of windows on the first floor. The head of Minerva by Philip Martiny is carved on the keystone over the front entrance. The windows on the first floor also have keystones. Those flanking the entrance depict the seal of Jersey City (right) and the seal of Hudson County (left). Beyond the lobby of the entrance is a broad marble stairway and black wrought iron railing leading to the fourth floor. An extension to the Main Library was added to the rear of the building on Mercer and Montgomery Streets. The eight-story structure, designed by Albert S. Gottlieb of New York City and built by William Robertson & Sons of 15 Exchange Place, is primarily used for the shelving of books in the library’s collection. Gottlieb also designed the Greenville Branch on Kennedy Boulevard and Stevens Avenue in Jersey City, the Temple B’nai Jeshurun (now Hopewell Baptist Church) on High Street in Newark, and the New York City landmark Rizzoli Building on Fifth Avenue.

A look at Silk City

In 1840, Christopher Colt, cousin to famed gunsmith, Sam Colt, unsuccessfully attempted to weave silk in a portion of his cousin’s gun mill. Colt eventually sold his machinery to George Murray who in turn firmly established the city’s future textile explosion when he hired John Ryle of Macclesfield, England, Paterson’s distinguished founding father of silk. After an initial bumpy road, Ryle and other manufacturers began to boom when beginning in 1857, the United States government decreased tariffs on silk imports while increasing the tariffs on silks made abroad.

Through the 1880s, Paterson was known as “Silk City,” and its continued boom in textile production allowed the city to house and employ thousands of immigrants (initially from Northern Europe) to work as silk weavers, twisters, throwers and dyers. By the turn of the twentieth century, most silk workers were now from Eastern and Southern Europe and these new “unskilled” immigrant often clashed with previous groups that worked in the city before mechanization deskilled the silk weaving process.

The Paterson Museum was organized in 1925 by the City of Paterson Library’s Board of Trustees. The Museum began it’s operations in the assembly room of the Danforth Public Library with a display of natural history items that had been donated to the library by local residents.

In 1927, the collections were moved to the carriage house of former Paterson mayor and philanthropist Nathan Barnert. The house was located on Summer Street next to the Danforth Library.

Over the years, the Museum’s collections grew in size and scope, and additional space was needed. This need was met in 1982 when the Museum was relocated into the restored Thomas Rogers Locomotive and Machine Shop (c. 1873) at the corner of Market Street and Spruce Street, in the heart of the Great Falls National Historic Landmark District. The nationally famous Great Falls of the Passaic, provides a unique backdrop for our exhibits.