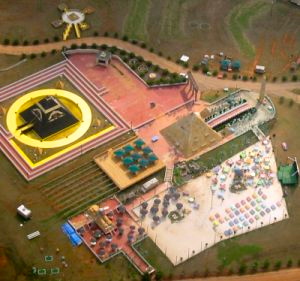 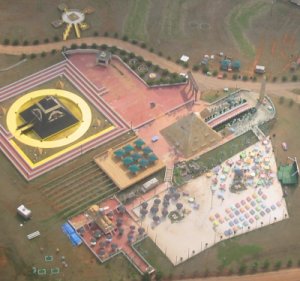 The Nuwaubian Nation or Nuwaubian movement is a religious organization founded and led by Dwight York.

York began founding Black Muslim groups in New York in 1967, and has changed his teachings and the names of his groups many times. In the late 1980s, he abandoned the Muslim theology of his movement in favor of Ancient Egypt and extraterrestrial themes, in 1993 leaving Brooklyn for Eatonton, Putnam County, Georgia, where he built an ancient Egypt-themed compound called Tama-Re.

By 2000, the “United Nuwaubian Nation of Moors” had some 500 adherents,  and drew as many as 5,000 visitors attending “Savior’s Day” (York’s birthday). Adherence declined steeply after York was sentenced to 135 years in federal prison in April 2004, and the Tama-Re compound was sold under government forfeiture and demolished in 2005.

The movement was highly eclectic and entirely dependent on York’s ever-changing pronouncements, described as “an extra-large dose of Egyptian schlock, served with a side dish of intergalactic mumbo jumbo” by Bill Osinski, author of a 2007 book on York and his arrest and eventual conviction. York’s writings and pronouncements over the years combined ideas from a wide range of UFO religion, New Age, esotericism and occultism, pseudoscience, besides basic Afrocentrism and Black supremacism.

The term “Nuwaubu” is found in “The Holy Tablets,” a 1700-page document published by York in 1996, as the term for “the way of life” of “supreme beings.” Nuwaubian teachings are sometimes also referred to as Nuwaubu/Nuwaupu, Wu-Nuwaubu, “Right Knowledge,” “Sound Right Reasoning”, “Overstanding”, “Blackosophy” or “Factology.” The term “Nuwaubianism” has also been used in some publications.  It is classified as a hate group by the Southern Poverty Law Center.

The Nuwaubian Nation was centered exclusively around the person of the founder, Malachi (Dwight) York, who legally changed his name several times, and has used dozens of aliases. York was born on June 26, 1935 (also reported as 1945).  His ministry began in the late 1960s, from 1967 preaching to the Pan-African “Nubians” (viz. African Americans) in Brooklyn, and he founded numerous esoteric or quasi-religious fraternal orders under various names during the 1970s and 1980s, at first centered around pseudo-Islamic themes, later moving to a loose Afrocentric ancient Egypt theme, eclectically mixing ideas taken from Black nationalism, cryptozoological and UFO religions and popular conspiracy theory. During the 1980’s, he was also active as a musician, as “Dr. York” publishing under the “Passion Records” label.

York published some 450 booklets (dubbed “scrolls”) under numerous pseudonyms. During the late 1990s, he styled himself a messianic founder-prophet of his movement, sometimes claiming divine status or extraterrestrial origin, appearing on his Savior’s Day celebrations at Tama-Re.

York was arrested in May 2002, and in 2004 convicted to a 135 year sentence for transporting minors across state lines in the course of sexually molesting them, racketeering, and financial reporting charges. York’s case was reported as the largest prosecution for child molestation ever directed at a single person in the history of the United States, both in terms of number of victims and number of incidents. The case was described in the book Ungodly: A True Story of Unprecedented Evil (2007) by Bill Osinski, a reporter who had covered the Nuwaubians in Georgia during the late 1990’s.

York is denounced by orthodox Black Muslims as a fake Muslim, a “Mahdi pretender” and “blasphemer”. But some factions of the Black supremacist subculture in the United States appear to continue to support York, portraying his conviction as a conspiracy by the “White Power Structure.”  Malik Zulu Shabazz, chairman of the New Black Panther Party and York’s lawyer, described York as “a great leader of our people [… and] victim of an open conspiracy by our enemy.”

The group was called the “Ansaaru Allah Community” (AAC) during the 1970s and 1980s, headquartered in Brooklyn, New York (“Ansar” was the name of a 19th-century militant messianic movement in Sudan). The AAC was a messianic, millennialist, purportedly Muslim group that was well known among Black nationalists and Black Muslims at the time. During the 1970s, the group expanded its sphere of influence beyond New York, setting up chapters in Trinidad, Baltimore and Washington. According to former follower Saadik Redd, York had between 2,000 and 3,000 followers during the 1970s. Their headquarters was at Bushwick, Brooklyn, until 1983, when they moved to Sullivan County, New York, to a site they called Camp Jazzir Abba.  A Muslim cleric, Bilal Phillips, in 1988 published The Ansar Cult in America, denouncing the movement as un-Islamic. Phillips relied heavily on testimonies of former adherents.

In the late 1980s, York shed the Muslim flavor of his movement and moved on to a more eclectic approach that would result in the “Nuwaubian” movement. York now styled his movement in a mixture of Ancient Egypt and Native American themes. In keeping with this change of focus, York changed his legal name again, from “Issa Al Haadi Al Mahdi” to “Malachi York,”  effective 12 March 1993.

In 1996, under the name “Nayya: Malachi Zodok York-El” he published The Holy Tablets (a.k.a. the “Nuwaubian Bible”), for which he claims divine inspiration, and in which he styles himself as a messiah figure, expounding on a UFO religion surrounding the “planetRizq“, according to which, he himself as well as pharaoh Ramesses II were extraterrestrials.

The Tama-Re complex in Eatonton, Georgia became the movement’s new headquarters in 1993. The Nuwaubians now presented a narrative borrowed from that of the Washitaw Nation (a Louisiana Black separatist group led by an eccentric ’empress’), according to which they were Yamasee (a historical confederation of Native American nations in the Georgia area) as well as “Moors”, based on a claim of prehistoric migration to America “before the continents drifted apart”. At this point, the group called itself “Yamassee Native American Moors of the Creek Nation.”  During the early 2000s (decade), York presided Tama-Re styled as “Our Own Pharoah NETER A’aferti Atum-Re,” leader and chief mystagogue of “The Ancient Egiptian Order.”