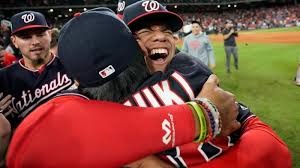 Howie Kendrick delivered for the Nationals in a big moment once again. (John McDonnell/The Washington Post)

Suddenly, it was all over, and the blue-jerseyed visitors were spilling and screaming out of every corner of Minute Maid Park — from their dugout along the third base line, the bullpen in left field, the expanse of outfield, all four corners of the diamond — and converging upon the joyous pile of humanity forming near the center. Once the Washington Nationals had no more giant mountains to climb, they took the small dirt hill of the pitcher’s mound, and they hugged and bounced.

With one more comeback win, at the end of a comeback season for the ages, the Nationals were World Series champions. A 6-2 victory over the Houston Astros in Game 7 on Wednesday night sealed it, delivering the first baseball title for the nation’s capital since Walter Johnson’s Senators won their only one in 1924. To learn more go to the link below: