Nando’s! Give Your Body What It Wants!

Let’s face it, life’s too short for bad, boring, too-fast-for-its-own-good food. We stuff it in our faces with little regard for our tastebuds, or how it might affect our bodies. But what if we could give them a voice? What would our bodies say about the food we feed them, and what would they rather we eat instead?

Nando’s is a South African casual dining restaurant group originating from the Mozambican–Portuguese community with a Portuguese/Mozambiquan theme. Founded in 1987, Nando’s operates about 1,000 outlets in twenty-four countries on five continents and as of 2012 had sales of $650 million.

Nando’s specializes in chicken dishes with either lemon and herb, Mango and Lime, medium, hot, extra hot or extra extra hot Peri-Peri marinades (properly known as Galinha à Africana). In some countries, Nando’s has other flavour options like mango and lime or Mediterranean.

The restaurant began in 1987 when Portuguese-Mozambican Fernando Duarte along with Robert Brozin bought a restaurant calledChickenland in Rosettenville, southern Johannesburg in South Africa. They renamed the restaurant Nando’s, after Duarte. 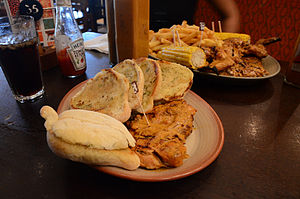 An example of food served in Nando’s

Nando’s specialises in flame-grilled Peri-Peri chicken. The chicken is served in quarters, halves, wholes, and butterfly breasts (UK, Ireland and South Africa only). Nando’s also serves burgers, pitas, salads, wings and wraps. In some countries, Nando’s sells chicken livers, Espetada (a large stand with a skewer of chicken breast and grilled peppers) and Cataplana (a chicken and rice dish served in a traditional Portuguese copper dish).

Peri-peri (piri piri, pili pili), also known as African Bird’s Eye chilli, is a variety of Capsicum frutescens widely grown in East and Southern Africa. Nando’s products are basted in one of four Peri-Peri flavours. Nando’s has published a book about Peri-Peri called Pain and Pleasure – Peri-Peri the contrasts and contradictions of the African Bird’s Eye Chilli.

Nando’s manufactures a range of sauces which are sold in Nando’s restaurants and in supermarkets. They include Peri-Peri sauces, marinades, cooking sauces and a Peri-Peri Essence.

In 2010, Advertising Age magazine named Nando’s as one of the world’s top 30 hottest marketing brands. 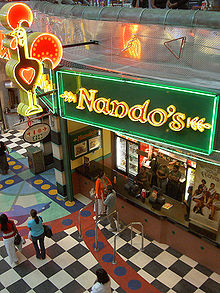 The first restaurant began in 1987 when Robert Brozin and Fernando Duarte bought a restaurant called Chickenland in Rosettenville, southern Johannesburg.

Nandos has been operating in Botswana since 1993.

There are currently three Nando’s restaurants in Mauritius, one at the Trianon Shopping Centre, the other in the centre of Port Louis, and a third one recently opened at Bagatelle – The Mall of Mauritius. A further six restaurants are to open within the next 4 years.

Nando’s began operating in Zambia in 2002.

In Zimbabwe, there are eight restaurants in Harare, two in Bulawayo and one each in Kwekwe, Gweru and Mutare. 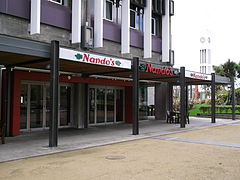 Nando’s has been in the Australian marketplace since 1990, when the first restaurant opened in Tuart Hill in Western Australia. As of December 2012 there are over 270 restaurants in Australia with further growth planned of around three additional sites per month.

There are 3 Nando’s in Fiji.

Nando’s opened their first store in Glenfield in 2000. As of February 2013 there are 30 Nando’s in New Zealand: Whangarei, Auckland (18), Hamilton (2), Tauranga, Rotorua, Palmerston North, Wellington (3), Christchurch (2), and Queenstown.

Nando’s has been running in Bangladesh since 2007. The first restaurant was opened in Dhanmondi area. It is running there as a franchised business. All of the outlets in Bangladesh sell halal foods. Currently it is operated in the prominent locations of Dhaka and Chittagong.

In Malaysia, Nando’s has been established since 1998 and currently, there are 38 restaurants in Malaysia. The latest restaurant opened at Aeons Station 18 Shopping Mall, Ipoh, Perak in April 2012.

Nando’s came to Pakistan in 2001 and is one of the oldest trading markets in Asia.  Pakistan has seven Nando’s outlets, four in Karachi, two in Lahore and one in Islamabad.

In Singapore, Nando’s opened its first restaurant on 9 May 2010, located at Bugis Junction. By 2014, the brand has opened other restaurants at Tanglin Mall, Plaza Singapura and Tampines Mall.

In 1992, Nando’s expanded to the United Kingdom, opening its first restaurant in Ealing, London. As of 10 October 2013, Nando’s has 280 restaurants located across the UK, with over 100 of those in London.

In 2009, Nando’s UK was awarded Three Stars (highest accolade) in the Best Companies Annual Accreditation Awards – the only entrant in the large companies’ category to achieve the three star rating.

Over 50 of the UK’s branches serve Halal certified chicken.

Nando’s has the largest collection of South African art in the UK, with over 3,000 works displayed in their restaurants.

Nando’s opened in the Republic of Ireland from 2006 onawards. Its restaurants can be found in Cork and Dublin.

Nando’s has operated since 1994 in the Canadian market, with stores in the provinces of British Columbia (Vancouver, Coquitlam, Burnaby, Abbotsford, Victoria, Kamloops), Alberta (Calgary) and Ontario (Ottawa, Toronto).