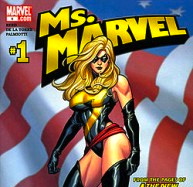 The great quotes of: Ms. Marvel 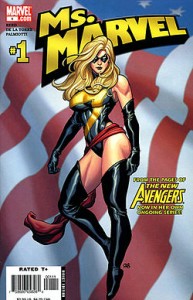 Ms. Marvel is the name of a fictional character appearing in comic bookspublished by Marvel Comics. Created by writer Roy Thomas and designed by artist Gene Colan, the non-powered Major Carol Danvers debuted as a member of the United States Air Force in Marvel Super-Heroes #13 (March 1968) and as Ms. Marvel—a fusion of alien Kree and human genes—in Ms. Marvel #1 (January 1977).

Debuting in the Silver Age of comics, the character featured in a self-titled series in the late 1970s before becoming associated with superhero teams the Avengersand the X-Men. The character has also been known as Binary, Warbird, andCaptain Marvel at various points in her history, and has featured in other Marvel-endorsed products including video games, animated television series, and merchandise such as trading cards. In the 2000s, the increased use of her as a character eventually prompted some commentators to note that “she’s now the House of Ideas’ premier heroine.”  She was ranked 29th in Comics Buyer’s Guide‘s “100 Sexiest Women in Comics” list.

The character debuted in the title Marvel Super-Heroes as an officer in the United States Air Force and Security Chief of a restricted military base, where Danvers meets “Dr. Walter Lawson,” the human alias of alien Kree hero Captain Marvel.  In a later story, Danvers is caught in the explosion of a Kree device, after being kidnapped by Yon-Rogg. Although Captain Marvel manages to save her life, Danvers sustains serious injuries. 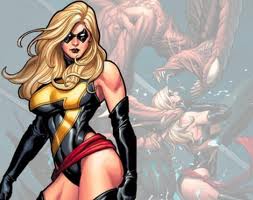 Danvers resurfaces with superhuman abilities and becomes the hero Ms. Marvel in a self-titled series in January 1977, at first written by Gerry Conway and later by Chris Claremont. In the series, it is revealed that the energy exposure from the explosion of a device called the “Psyche-Magnetron” caused Danvers’ genetic structure to meld with Captain Marvel’s, effectively turning her into a human-Kree hybrid.  Ms. Marvel guest-starred in Defenders and The Avengers.  The character then had a series of semi-regular appearances in The Avengers, with additional appearances with the Defenders, Spider-Man, the Thing, and Iron Man.  In one of these stories, the mutant terrorist Mystique, kills Ms. Marvel’s lover, Michael Barnett.

In The Avengers #200 (October 1980), Ms. Marvel is kidnapped by a character named Marcus—the apparent son of Avengers foe Immortus—and taken to an alternate dimension, where she was brainwashed, seduced, and impregnated. She gives birth on Earth to a child that rapidly ages into another version of Marcus, who takes Ms. Marvel back to the alternate dimension with no opposition from the Avengers. Comic book historian Carol A. Strickland criticized the storyline in an essay titled “The Rape of Ms. Marvel.”  Citing Marcus’s line, “Finally, after relative weeks of such efforts—and admittedly, with a subtle boost from Immortus’ machines—you became mine,” Strickland posited that Ms. Marvel’s impregnation was simply rape by another name. As former writer of the solo title, Chris Claremont also commented on the inappropriateness of the storyline, and effectively “undid” the story in Avengers Annual #10 (1981). 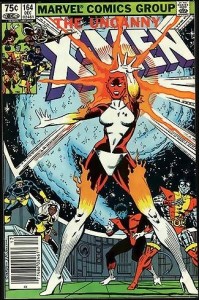 In that story, Danvers is revealed to have returned to Earth—courtesy of Immortus’ technology after Marcus continued to age and die of old age—but is attacked by the mutant Rogue, who permanently absorbs the character’s abilities and memories.  Danvers’ memories are later restored by Professor X, and an angry confrontation with the Avengers concerning their apathy follows. Claremont continued to develop the character in the title Uncanny X-Men, as using espionage, Danvers enters the Pentagon and wiped old government files on the X-Men.  During an adventure in space with the mutant team the X-Men, Danvers is changed courtesy of experimentation by the alien race the Brood into a newly empowered character called “Binary.”  Drawing on the power of a cosmic phenomenon called a white hole, Danvers becomes capable of generating the power of a star. As Binary, the character has a number of encounters with the X-Men, New Mutants, the British team Excalibur as well as a solo adventure.

Claremont expanded on the incident with the character Rogue by having the Carol Danvers persona manifest itself within Rogue’s mind, sometimes overpowering Rogue’s personality. This happened to Rogue on several occasions, which caused an uneasy armistice between them.  Sometime later after Rogue was blown through the ancient supernatural gateway called the Siege Perilous, the Ms. Marvel persona was separated from her as an independent entity. However she was captured by the Shadow King, and sent to attack Rogue. As the two battled, they each discovered there was not enough lifeforce between them to allow them both to exist. Just as the Ms. Marvel persona was on the verge of killing Rogue, Magneto intervened and destroyed her, saving Rogue’s life. 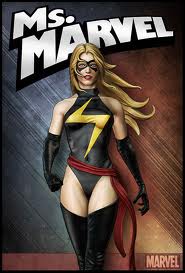 The character continued to make sporadic appearances, and two additional issues planned for the original title—prevented by cancellation—were printed in a quarterly anthology series.  The same year the character was also used extensively in the storyline “Operation Galactic Storm.”  By the conclusion of the story the character had lost her connection to the white hole she drew her powers from, reverting to use of the original Ms. Marvel powers, but retaining the energy manipulation and absorption powers she had as Binary, albeit on a smaller scale.

After several more team and solo appearances the character then rejoins the Avengers with the new alias Warbird. Writer Kurt Busiek adds a new dimension to the character and casts her as an alcoholic, struggling to come to terms with the loss of her cosmic powers and memories. Danvers disgraces herself during the “Live Kree or Die” storyline and is soon suspended from active duty.

After a brief appearance in Marvel’s alternate universe title What If?, the character features in Iron Man, Wolverine, andThe Avengers before making a cameo appearance in Mutant X. 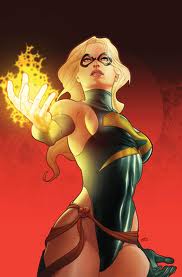 The character then featured as “Captain Marvel” in a false reality created by mutant the Scarlet Witch in limited series House of M.  This reality pandered to Carol’s subconscious desire to be accepted as she proved to be the most popular superhero on Earth. Ms. Marvel then came to prominence again when the character was launched in a second self-titled volume Together with fellow Avenger Iron Man, Carol also becomes a principal advocate of the Superhuman Registration Act during the events of Civil War.  The story also continues in Ms. Marvel’s own title as the character battles the anti-registration heroes led by Captain America.

The storyline has major consequences for the New Avengers, with the team splitting and the pro-registration heroes—including Ms. Marvel—forming their own team, debuting in The Mighty Avengers.  Carol enters into a relationship with fellow member Wonder Man, appears in a crossover series with the robot Transformers, and becomes leader of the Mighty Avengers.  The character makes an agreement with Tony Stark, director of S.H.I.E.L.D., to lead a covert strike team called Operation: Lightning Storm, its designated mission being the elimination of supervillains before they become global threats. 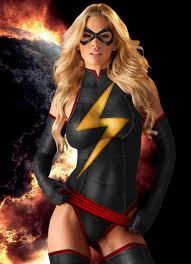 Ms. Marvel was captured by the Brood on Monster Island, whereupon she found the Brood Queen. An intense confrontation ensued during which Ms. Marvel was temporarily cut off from her powers and had to fight the Brood Queen as Carol Danvers and, at one point, she was stripped of her civilian clothing, forced to drift through space until she was able to access her powers.

Ms. Marvel also plays a significant role in the limited series Secret Invasion against the alien shapeshifting Skrulls. She befriends the Skrull impostor of Captain Marvel and proves to him that she is not a Skrull by revealing intimate details about their life together. At the conclusion of the war with the Skrulls, Norman Osborn is placed in charge of the registered Avengers team. Refusing to serve under Osborn, Ms. Marvel flees Avengers Tower and joins the New Avengers, becoming second-in-command.  Osborn appoints former Thunderbolt member Moonstone (Karla Sofen) as the “new” Ms. Marvel to his Dark Avengers team; Moonstone wears a variation of Ms. Marvel’s original costume.  Osborn engineers a battle that results in Danvers’ powers overloading, causing her apparent death. The character Moonstone takes over the title role in the ongoing Ms. Marvel series.  Carol Danvers returns with the aid of the New Avengers, a group of MODOK embryos (creations of the organization Advanced Idea Mechanics [AIM]), and a character known as the “Storyteller” and reclaims the title of Ms. Marvel from Karla Sofen. 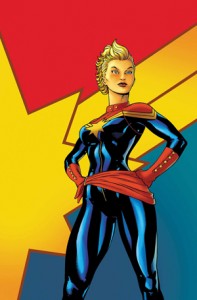 In the conclusion of the second volume of Ms. Marvel, Carol Danvers battles her old nemesis Mystique and a clone of Captain Marvel created by the Skrulls during the Secret Invasion, after they carry out a series of tragedies at temples belonging to the Church of Hala, a church dedicated to Mar-Vell.  Danvers later aids the allied forces of Captain America against Norman Osborn during the Siege of Asgard.  Carol also begins to develop a friendship with Spider-Man. Though he infuriates her the first time they work together, the two become closer when he helps her during the “Dark Reign” storyline, and she later admits to having feelings for him.  Following the conclusion of the “Siege” storyline, Ms. Marvel returns as a regular character in the second volume of The New Avengers. 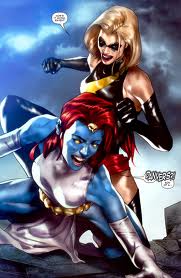 In July 2012, Carol Danvers assumed the mantle of Captain Marvel in an ongoing series by writer Kelly Sue DeConnick and artist Dexter Soy. Danvers sports a revamped costume to complement the codename. DeConnick stated at 2012 WonderCon that the series would reflect on what the legend of Captain Marvel means to Danvers, how she handles that responsibility, and how the rest of the Marvel Universe reacts to her assumption of it.  Danvers also rejoins the main Avengers team as Captain Marvel in vol. 5 of The Avengers and in the spin-off series, Avengers Assemble, also written by DeConnick.  DeConnick said, “You might know this — I have a certain affection for [Carol Danvers]. And I decided, ‘Well, if I’m deciding, there will be a slot available for her as well.'”  In 2013, Carol Danvers starred in the Captain Marvel /Avengers Assemble crossover storyline, “The Enemy Within”. In the story, Danvers and her Avenger teammates battle Yon-Rogg, the Kree commander who was responsible for the explosion that caused Danvers to receive her powers.