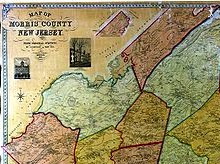 Morris County is a county located in the U.S. state of New Jersey, about 25 mi (40 km) west of New York City. According to the United States 2010 Census, the population was 492,276. It is part of the New York Metropolitan Area. Its county seat is Morristown.

Morris County was the eighth-wealthiest county in the United States by median household income, and ranked tenth by per capita income. It is the ninth-wealthiest county in the United States by personal per-capita income, the highest rank in New Jersey. The county ranked third in the New York Metropolitan area in terms of median income.

The area of Morris County was inhabited by the Lenape prior to the coming of the Europeans. They lived along the rivers and hunted game, fished, collected plants and nuts.

From 1611 to 1614, the Dutch established the colony of New Netherland, which claimed territory between the 40th and 45th parallels, which included northern New Jersey.

There were hostile relations between the Dutch and Native Americans between 1643 and 1660. This prevented colonization by the Dutch of the Morris County region which was technically included in their claimed “New Netherland.”

On August 27, 1664, three English ships approached Fort Amsterdam and the fort was surrendered to the English. The English now controlled New Netherland and Morris County was now under control of the colony of New York. Relations with the Native Americans improved for a while.

There was a war with the Dutch ten years later. The Dutch re-took control of New Amsterdam but after a year returned it to the English. Relations with the Native Americans and English improved for a while.

Objects collected for display at the Morristown Neighborhood House formed the beginnings of the Morris Museum collections, and education has been an intrinsic part of the museum’s program from its inception. Mrs. Aldus Pierson, the House’s first headworker, gave talks to children about various cultural expressions represented by this early collection of art and artifacts from a broad range of cultures throughout the world. Generous donors soon began giving Mrs. Pierson interesting objects they had acquired in their travels around the world.

By 1927, the collection filled seven rooms and encompassed the first floor of the Neighborhood House’s annex. From 1938 through 1956, the museum occupied space in the Maple Avenue School, enabling staff to enhance programs for children and to establish relationships with area schools. The museum was incorporated in 1943, and the outreach education program began in 1950 with a series of in-school presentations for Morris County students, including talks about American Indian culture.

This house, which was entered into the National Register of Historic Sites on April 4, 1977, was constructed in the late 18th century, and was home to the Grimes family, a Quaker family active in the New Jersey antislavery movement. Dr. John Grimes (1802-1875), the most noted and vociferous antislavery advocate in the family, was born in this house and lived here until 1828 when he moved to nearby Passaic County to practice medicine. In 1832, he moved back to the homestead in Morris County and subsequently relocated to the neighboring community of Boonton. New Jersey’s citizens were divided over the issue of slavery.

Many people in New Jersey were sympathetic to the southern slave owners who had economic as well as social ties to the state. This faction was challenged by another group, largely comprised of Quakers like the Grimes family, who publicly opposed slavery. Once arrested for harboring a runaway slave, Dr. Grimes was repeatedly harassed by supporters of slavery while living at this house and later at his home in Boonton. Dr. Grimes’ participation in the Underground Railroad is substantiated in his 1875 obituary in the newspaper Jerseyman, that stated, “In the earlier days, his father’s house, Mr. Jonathan Grimes of Parsippany (Mt. Lakes today), was a prominent station on the celebrated Underground Railroad. In later days it was transferred to his own home in Boonton through which many a poor runaway has been helped on his way to Canada. They came to him from Baxter Sayre, Esq. of Madison (long since dead) he forwarding them in the night to Newfoundland, the next station.”

aided his father’s Underground Railroad work, transporting runaway slaves from one community to another. His father owned the Powerville Hotel, which served as a UGRR station. Hopkins’ account of his Underground Railroad experiences appeared in the 1910 publication Boonton: Gem of the Mountain, an account that identified individuals and communities that were part of the Underground Railroad’s operation in the Boonton area.