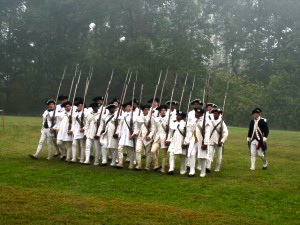 Monmouth County was established in 1675. Its name came from a suggestion from Colonel Lewis Morris. He suggested it be named after Monmouthshire, Wales. In 1714 the first county government was established. At the June 28, 1778 Battle of Monmouth, near Freehold, General George Washington’s soldiers defeated the British under Sir Henry Clinton, in the largest battle of the American Revolutionary War.

The Battle of Monmouth was a American Revolutionary War battle fought on June 28, 1778, that was a turning point of the American Revolution. The main American Continental Army under George Washington attacked the rear of the British Army’s column led by Sir Henry Clinton as they left Monmouth Court House (modern Freehold Borough, New Jersey).

American General Charles Lee led the advance and initiated the first attack on the column’s rear. When the British turned to flank him, he ordered a general retreat without so as much as firing a shot at the enemy, and his soldiers soon became disorganized. Washington sent the dejected Lee to the rear, then personally rallied the troops and repelled two counterattacks refered to as “Washingtons Advance”. On a very hot day, the battle was a standoff. Both sides lost as many men to hyperthermia as to the enemy. Both sides retired at nightfall.

The battle was the last major engagement of the northern theatre, and the largest one-day battle of the war when measured in terms of participants. Lee was later court-martialed for his actions.

The legend of “Molly Pitcher” is usually associated with this battle. According to one story, she was a housewife who came to battle with her husband and took his place at the cannon after he fell. Based on a true incident, the story idea is embellished and has become a legend over the years.

Each year during the last weekend in June, the Battle of Monmouth is reenacted at Monmouth Battlefield State Park in modern Freehold Township and Manalapan.

Built 1752-3, it served as headquarters for British General Sir Henry Clinton before the Battle of Monmouth in 1778.

Built c.1754 in the Dutch vernacular tradition for a well-to-do farming family.

Built c.1710, it is the “most noted Tavern in Shrewsbury” and furnished as a public house.

Built c.1756, it was the home of a prominent Loyalist family in colonial times and is now a stop on the New Jersey Women’s Heritage Trail.

Built c.1853 by later generations of the Taylor family of Marlpit Hall, this Victorian mansion does not have regular visiting hours, but is available to rent for events or meetings.  The Taylor-Butler House, an elegantly appointed Victorian mansion situated on five wooded acres within the Middletown Village Historic District, was built in 1853 by Joseph Dorset Taylor and his bride, Mary Holmes Taylor. The house reflected the wealth and status that they had acquired in New York’s China trade, as well as their pride as descendants of one of Monmouth County’s oldest families. The house stayed in the family until 1930.

Lovingly restored in the 1940’s by architect Henry Ludwig Kramer, the house is one of the finest examples of the Victorian Italianate style still standing in Monmouth County. The Monmouth County Historical Association purchased the property from the estate of George W. Butler who lived there since the 1950s and planted many of the holly trees that decorate the grounds.

Fortune started his education at Marianna’s first school for African Americans after the Civil War. His family moved to Jacksonville where he attended Stanton High School for Negroes. He worked both as a page in the state senate and apprenticed as printer at a Jacksonville newspaper during the time that his father, Emanuel, was a Reconstruction politician in Florida. At one time he also worked at theMarianna Courier and later the Jacksonville Daily-Times Union. These experiences would be the start of a career wherein he would go on to have his work published in over twenty books and articles and in more than three hundred editorials. He was appointed customs inspector for the eastern district of Delaware but only held this position for a few months before resigning in order to attend Howard University.

The T. Thomas Fortune House, also known as Maple Hill, was the home of Timothy Thomas Fortune, a leading journalist and civil rights advocate.   The T. Thomas Fortune House is a National Historic Landmark, an official designation conveyed only to sites of exceptional national significance. It is the sole such landmark in New Jersey associated with African American history, and should be a source of pride. Instead its future is uncertain because Red Bank’s central business district is experiencing tremendous growth; New Jersey Monthly Magazine recently designated it the “top downtown” in central New Jersey. The Fortune House’s one acre lot, the largest in the area for many blocks is extremely attractive to developers. PNJ thinks its loss should be avoided. Red Bank’s future as a cultural, shopping, and dining destination can include the Fortune House.