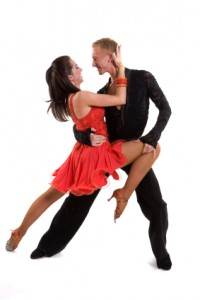 Modern Jive is a dance style derived from swing, Lindy Hop, rock and roll, salsa and others, the main innovation being to simplify the footwork – by removing syncopation such as chasse. The term French Jive is occasionally used instead, reflecting the origins of the style. The word modern distinguishes it from ballroom Jive. Modern Jive is a male-led dance.

Modern Jive was developed in the United Kingdom during the 1980s at three London-based clubs, ‘Ceroc’, ‘Le Roc’ and ‘Cosmopolitan Jive’. The style was based upon a type of Jive that had evolved in France in the aftermath of World War II, when American dances such as the Jitterbug had been popular due to the presence of the American military.

Despite common belief Modern Jive was not created in France. However its origins owe somewhat to the French version of Rock n Roll – Le Bop. The dance commonly known as Modern Jive is distinctively different to Le Bop which is a high tempo dance with completely different timings to Modern Jive.

The beginning is not clear and there are different accounts to how Modern Jive started and different organisations will lay different claims. However ‘Michel Ange Lau’ played the major role in the change from Le Bop to Modern Jive and it is widely accepted it happened in London (at a club called ‘Centre Charles Peguy’). Of cause a number of Brits including James Cronin and Christine Keeble had seen Le Bop in France and had the desire to learn the dance back home in London, and were part of Michel’s group / students.

The problem Le Bop had was that the style of music being played at discos was changing, and the high tempo that dances like Roc n Roll and Le Bop used was becoming less popular.

The change in music prompted the birth of Modern Jive; in 1980 Michel Ange Lau and his group of Le Bop dancers changed the timing of Le Bop causing a complete revolution in the dance. This change in timing not only allowed him and his students to dance to a much larger variety of music/tempos (including the popular music now being found in clubs & discos), but also to create much more intricate moves, and evolve away from what today’s Modern Jivers would call basic patterns/moves.

What is Modern Jive? 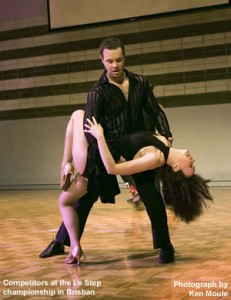 Modern Jive is a dance style in its own right, and although it adapts moves from other dance styles like WCS, SALSA, Ballroom & Latin etc a Modern Jive dancer would struggle dancing Modern Jive with dancers dancing these styles. Modern Jive has many variations and is continually evolving into different trends, styles and fashions, however the dancers from all these variants are still able to dance together. The key to understanding Modern Jive is the beginner moves, these 20 plus moves continually reinforce the ‘absolutes’ to the dance (the consistencies that allow modern jive dancers to dance together, despite their preferences).

The step back at the start of each move; this derived from the Rock Step and changed to a simple step back when the timing changed. The step back creates the in & out motion, both dancers step away from each other at the start of a move / pattern, to achieve tension & compression in the hands to assist lead and follow technique, more importantly the step back is the consistent that allows the 100s of moves to be joined, depending on which hand the man is using – any order.

Off phrase dancing, Modern Jive is a ‘Off phrase’ dance. This means a move does not always have to start on a particular beat eg beat 1 or beat 2 (Cha Cha) of the music – this allows the massive flexibility, diversity, and high level of musicality that’s often seen in the dance. Moves often have varying numbers of beats to them eg Catapult 8 counts (16 beats of music), Octopus 7 counts (14 beats of music). 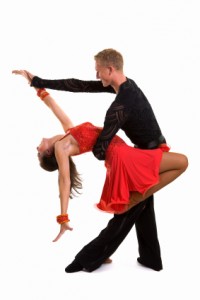 Slower tempos in Modern Jive allow for more styling and music interpretation. The slower tempo allows the lady / follower to indicate when she wants freestyle time, the dance can also use a body leads at slower tempos and dancers often dance a lot closer. Dancing to slower music allows a lot more two way communication, allowing more freedom, and music interpretation, however good Modern Jive dancers should be able to adapt their dancing and dance to a full spectrum of tempos. At higher tempos timing becomes more of a skill, where two way communication is reduced, at higher tempos musicality (eg hitting the music phrasing / breaks and interpreting the music), is more difficult to achieve as both dancers have to be in tune together but also with the music. Most dancers dancing Modern Jive Blues originate from Modern JIve and are familiar with Modern Jive Beginners moves and associated absolutes.

Modern Jive naturally rotates (normally clockwise). This is due to 2 or 3 consistencies that can be seen in the beginner moves and more often than not in the intermediate moves. a) the lady continually steps into the mans right side, causing a clockwise rotation – rarely to the mans left side, b) Often on count three the lady is turned or spun clockwise (1st move basic, Yo Yo, Hatchback…..), c) a lot of the beginner moves finish with a anti clockwise return – causing the lady to stabilise on the left foot stepping slightly to her left (clockwise), instead of directly back. This is Modern Jive danced in its natural form, and should not be confused with a really bad technique where the lady continually skips around the man (also known as ‘Roundy Roundy’ in the UK), despite his lead. This ‘Roundy Roundy’ style is often found at higher tempos by in experienced lady dancers and is totally different to the slightly rotating slot (the natural dance).

Some experienced Modern Jive dancer have developed a directional lead that allows them to dance in a slotted style – continually dancing up and down in two directions. Predominantly the slotted style is initiated by the lead, where he will send the lady in a chosen direction or exit a rotating move directly down the slot. Although Modern Jive is often taught on stage in two directions, this is simply to allow large classes to observe the instruction and instructors often compensate to be seen. At beginner level (even at intermediate level), directional leads are often not taught effectively and as soon as the class goes to freestyle dancing the dancers start to rotate in a rotating slot style. Dancing in the slot is a advanced technique that can be developed and adds another dimension to Modern Jive, it can also looks impressive when a group of dancers are dancing slotted in the same area in the same direction.

Presenting forward is a skill often developed by Professionals, Competition dancers or Showcase dancing and requires a further skills and additional techniques. Here the dancers develop the skill of presenting often in one consistent direction (forward as apposed to facing each other). Dips, drops, poses, exiting moves / lifts and even smiling consistently in one direction towards spectators, judges or audiences. 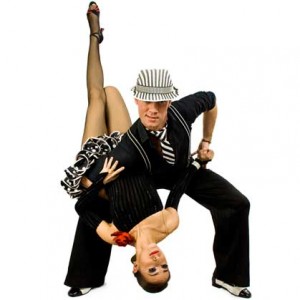 The term Modern Jive was originally coined in 1990 by Christine Keeble on a programme called ‘How To Jive’, designed to promulgate this new style of jive. At that time the dance was known variously as Ceroc, LeRoc or French Jive, although Ceroc was the original. Christine Keeble used the term ‘modern jive’ to encompass all of these names.

The term ‘modern jive’ was adopted, despite the absence of chasse or triple step (typical of “real” jive forms). Various clubs promalgating the name as the dance spread out from its two earliest centres of London and Bristol and it later became accepted as a generic term for the dance. It is now used by a large number of independent teachers across the UK and internationally. It is also used by many of the franchise operators, although these companies still prefer to use their own branding.

In the English-speaking world, Modern Jive classes and events are often franchised or run under various brand names – including, Blitz, DanceJive, ViBe Dance Nights “Revolution Dance” Northwest, Ceroc, LeRoc, Mo’Jive, Cloud9, Jive Nation, South Coast Modern Jive The Thing, and others.  Beyond the bounds of the English-speaking world, modern jive has still to make an immpact. In Europe there are Jive Nation Poland in Poland and M-Jive in Germany which are slowly bringing the dance style to a wider audience.

Following a different but parallel evolutionary path, dance styles such as Discofox (found in Germany and Switzerland) and Bugg (found in Sweden) can also be considered to be forms of Modern Jive and may be indistinguishable from those found in the UK and elsewhere in Europe.

While all these forms of Modern Jive have Swing and Rock-and-Roll dance moves in common, moves from many forms of dance including Salsa and Tango may be included, according to the specific franchise or even the particular dance teacher. Because of its eclectic nature there are hundreds of moves and variations that can be learnt, introduced or adapted.

Although dance routines are developed and rehearsed for competitions, Modern Jive is most frequently danced freestyle, providing additional challenges to more advanced dancers in terms of musical interpretation and expression.

Different franchises or teachers often have different names for identical moves, and different signals to indicate the next move. The Man’s Spin taught at one venue may be identical to the Man’s Pass taught by a different venue. Due to its origins, Modern Jive moves may be similar to moves from other dance styles; the First Move Triple Steps in Modern Jive is similar to the Lindy Hop Jockey, for example. Despite this there is rarely a problem dancing with people who have been taught other styles, at least with the less advanced moves. 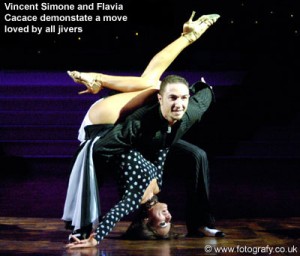 Like many Western partner dances, Modern Jive is most often a male-led dance.

Modern Jive is also occasionally danced by three dancers, with one lead and two followers (a variant known as “Double Trouble” in the UK or “Triples” in Australia/New Zealand).

Also it can be danced with a change of male lead with one female follow, known in the UK as Tag.

Many of the Australian offshoots of ceroc transitioned to a footwork coined “Step” in about 1995.

The original “rock” footwork specifices a step back with either foot, transferring the weight to the moved foot on each of the odd numbered beats (1, 3, 5, 7) The moved foot is returned to its starting position on the even beats. (2, 4, 6, 8).

Rock footwork was originally offered as a “beginner” footwork in Australia. More recently it has been dropped. The reason for it being dropped is pedagogical. The problem appeared to be that the transition from beginner to intermediate dancer (so-called) meant one had to “unlearn” one and then “re-learn” another rhythm and weight change components of the dance. Unfortunately, the “rock” footwork is actually more suited to fast music (leaning towards “advanced” dancers) as it reduces the number of weight changes required during any rhythm unit. Thus, the preference for “step” footwork has reduced the “terminal velocity” modern jive can be danced at – because it forces a weight change every beat.