You are here: Home / Education / Women Who Made History / ‘Mississippi Madam: The Life of Nellie Jackson’ by Mike Scott

‘Mississippi Madam: The Life of Nellie Jackson’ by Mike Scott 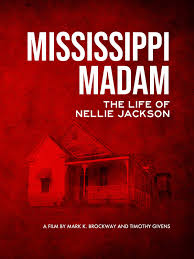 When we first started asking about Nellie and what people knew about her, what we heard was proof that the subject was worthy of a film. Our documentary research has uncovered stories, facts and records from within this community that have made our jaws drop, warmed our hearts, bewildered us, made us cry, and led us into a journey that we never expected when we began.

“Mississippi Madam” is the sort of movie the New Orleans Film Festival was made for. Its smattering of technical deficiencies are probably enough to keep it from getting as wide an audience as it should — soft focus here, poor lighting there — but it’s got such a compelling story to tell, and focuses on such an intriguing figure, that any lack of polish doesn’t matter in the final analysis. This is a movie that deserves to be seen.

Directed by Mark K. Brockway with Timothy Givens — the latter of whom is a design editor here at NOLA.com | The Times-Picayune — “Mississippi Madam” chronicles the life and career of Nellie Jackson, the brothel owner whose fame reached such a level in her 60 years in the business that T-shirts reading “Follow Me to Nellie’s” were a common sight, even far outside her home base of Natchez.

The catch is that despite her chosen trade, which was Natchez’s worst-kept secret, she was a beloved pillar of the community, an accomplished and adored businesswoman who made her name and her living by defying social norms.

“Famed for her luxury cars, her French poodles, her quiet charity and her love of baseball, ‘Miss Nellie’ reached a social plateau few black women could hope to achieve in a Southern town wedded to an antebellum heritage and Confederate traditions,” Chris Rose of The Times-Picayune wrote in a front-page story about Jackson upon her death in 1990 at the age of 87. “Befriended by politicians and police, restaurateurs and entrepreneurs, school teachers and journalists, she was arguably the best known woman in this picturesque river town. To read more go to the link below: