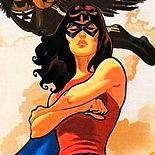 Re-submitted with a different audio track. The orginal version had the david byrne song ‘miss america’ and fit this slideshow like spandex on the hulk…tight! However, it was disabled so I here it is again with different audio…its not as good, scratch and dent if you will, but still a great example of golden age timely comics. The story is from marvel mystery comics at the height of WWII. Miss America vs the nazi pinhead killer, enjoy!

Miss America is a fictional comic book superheroine from the DC Comics Universe. She was first created by Quality Comics in Military Comics #1 (August 1941), and was carried over to DC Comics when they purchased Quality in the 1950’s. While the original Golden Age character is in public domain, the subsequent versions created by DC Comics are not. 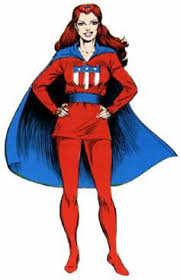 Miss America is originally Joan Dale, a courageous reporter who had a dream in which the Statue of Liberty appeared to her and, giving her the power to transmute elements, instructed her to battle evil. Joan awakes to find that she now has these powers; adopting a patriotically-themed costume, she begins fighting evil as Miss America.

She had a brief run in Military Comics #1-7, then faded into obscurity to a degree that Timely Comics (later Marvel Comics) soon felt free to create an unrelated character with the same name.

Initially, Miss America did not have a superhero costume, largely using her powers surreptitiously. In later stories she wears a costume comprising a sleeveless red blouse, a red-and-white striped skirt, and a blue cape fastened with a silver star. This costume continually changes in appearance, possibly because she uses her powers to create it. Following her initial run, later appearances of the character add a red domino mask.

In the 1980s, writer Roy Thomas revived the character. She is briefly referenced in the first appearance of the Freedom Fighters in the pages of All-Star Squadron, when she is said to have been a member of that group who was thought to have had been killed when Uncle Sam attempted to prevent the attack on Pearl Harbor from occurring on Earth-X. In the post- Crisis on Infinite Earths continuity, in the late spring of 1941 on Liberty Island, reporter Joan Dale has a dream that the Statue of Liberty comes to life and grants her the power to alter the nature of matter. Inspired by the dream, she creates a colorful costume and becomes Miss America, one of America’s first heroines. In truth, she had been abducted by the top secret government agency, Project M, and her powers were actually the result of a secret experiment. They believed the experiment to be a failure and had returned her to whence she had been taken, leaving her none the wiser. 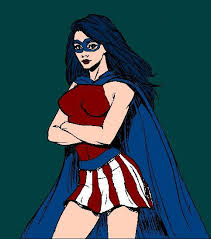 Later that year, the Japanese plot their attack on Pearl Harbor. Uncle Sam learns of the attack and assembles a group of heroes called the Freedom Fighters (with Hourman, the Invisible Hood, Magno, Neon the Unknown, and the Red Torpedo) to prevent it. The mission is doomed and all but Uncle Sam seemingly perish in the fight. Sam later discovers that three of his allies had survived, Miss America among them. After the mission, she is reclaimed by Project M.

When Robotman and the Young All-Stars visit Project M, they discover that Miss America is indeed alive, albeit comatose. A battle with the Ultra-Humanite breaks out, which awakens Joan from her coma. She promptly returns to the defense of her country and in late May 1942, she joins the Justice Society of America as the group’s secretary.

Miss America is last seen as an active heroine in a flashback in JSA, where she is once more working with the Freedom Fighters. 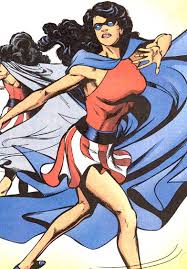 Eventually, Joan Dale’s powers fade and she retires as Miss America. She marries Admiral Derek Trevor, and eventually they become the adoptive parents of Hippolyta “Lyta” Trevor Hall, who becomes the modern-day Fury in Infinity, Inc.

Lyta becomes pregnant with the child of her teammate and lover, Hector Hall; however, Hector soon dies. She moves back home with her adoptive parents, Joan and Derek Trevor, and is soon reunited with Hector, who has become the new Sandman. Learning that Hector can only exist for one hour outside the Dream Dimension, Lyta and Hector marry and Lyta joins Hector in the Dream Dimension. Joan and Derek Trevor attend the wedding.

While Joan Dale does not make a present-day appearance in The Sandman comic-book series, she does appear in a photograph as Miss America in The Sandman #57. 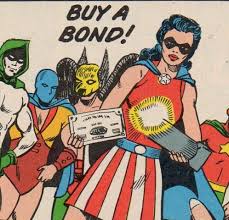 A much older Joan Dale returns in the fifth issue of Uncle Sam and the Freedom Fighters (January 2007) to confront a youthful imposter bearing the mantle who has, under the orders of Father Time, managed to neutralize and capture the new team of Freedom Fighters.

In issue #6, Joan reveals that she never lost her powers, but used them to create the illusion that she had aged in order to retire and live a normal life with her husband. Now that Derek Trevor has died, she lets the illusion slip and resumes her youthful, heroic guise to aid Uncle Sam and his new team. While fighting the impostor Miss America, Joan discovers that the impostor is a gynoid and destroys her.

In the new 2007 Uncle Sam and the Freedom Fighters series, Red Bee mutated into an alien-insect creature and mind-controls Joan into absorbing Human Bomb‘s explosive energy and taking it into space. Joan then explodes, presumed to be dead. Unbeknownst to her allies, Joan manages to keep her consciousness alive, rebuilding a new, young body from extant space materials. Evolved into a new form of life, she discards her Miss America identity to claim her new moniker: Miss Cosmos.

Joan Dale makes hes New 52 debut in Human Bomb #2. Depicted as a telepath she helps Michael Taylor to control his powers and gather information about the criminal organization C.R.O.W.N.

Miss America has the powers of transmutation on a molecular level. Her own inexperience with the physical sciences initially curtailed her use of the powers early in her career, usually using it for simple changes that were not permanent. There appeared to be an upper limit to the size of matter, and the duration of its transmutation, but this was never made specific.

Following her recent return, Miss America appears to have become much more proficient with her powers, claiming that she would be able to transform an enemy’s organs to glass or shrink them to microscopic size.