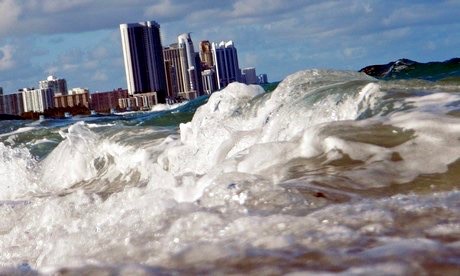 ‘We as a people will become afraid of the ocean’

Miami, Florida is already feeling the impacts of climate change – how will a city deal with the rising seas? Duration: 7:35 MSNBC.

Miami, the great world city, is drowning while the powers that be look away by Miami The Observer

Low-lying south Florida, at the front line of climate change in the US, will be swallowed as sea levels rise. Astonishingly, the population is growing, house prices are rising and building goes on. The problem is the city is run by climate change deniers

The Miami coastline: there are fears that even a 30cm rise in the sea level could be catastrophic. Photograph: Joe Raedle/Getty

A drive through the sticky Florida heat into Alton Road in Miami Beach can be an unexpectedly awkward business. Most of the boulevard, which runs north through the heart of the resort’s most opulent palm-fringed real estate, has been reduced to a single lane that is hemmed in by bollards, road-closed signs, diggers, trucks, workmen, stacks of giant concrete cylinders and mounds of grey, foul-smelling earth.

It is an unedifying experience but an illuminating one – for this once glamorous thoroughfare, a few blocks from Miami Beach’s art deco waterfront and its white beaches, has taken on an unexpected role. It now lies on the front line of America’s battle against climate change and the rise in sea levels that it has triggered.

“Climate change is no longer viewed as a future threat round here,” says atmosphere expert Professor Ben Kirtman, of the University of Miami. “It is something that we are having to deal with today.”

Every year, with the coming of high spring and autumn tides, the sea surges up the Florida coast and hits the west side of Miami Beach, which lies on a long, thin island that runs north and south across the water from the city of Miami. The problem is particularly severe in autumn when winds often reach hurricane levels. Tidal surges are turned into walls of seawater that batter Miami Beach’s west coast and sweep into the resort’s storm drains, reversing the flow of water that normally comes down from the streets above. Instead seawater floods up into the gutters of Alton Road, the first main thoroughfare on the western side of Miami Beach, and pours into the street. Then the water surges across the rest of the island.

The effect is calamitous. Shops and houses are inundated; city life is paralysed; cars are ruined by the corrosive seawater that immerses them. During one recent high spring tide, laundromat owner Eliseo Toussaint watched as slimy green saltwater bubbled up from the gutters. It rapidly filled the street and then blocked his front door. “This never used to happen,” Toussaint told the New York Times. “I’ve owned this place eight years and now it’s all the time.”

Today, shop owners keep plastic bags and rubber bands handy to wrap around their feet when they have to get to their cars through rising waters, while householders have found that ground-floor spaces in garages are no longer safe to keep their cars. Only those on higher floors can hope to protect their cars from surging sea waters that corrode and rot the innards of their vehicles.

Hence the construction work at Alton Road, where $400m is now being spent in an attempt to halt these devastating floods – by improving Miami Beach’s stricken system of drains and sewers. In total, around $1.5bn is to be invested in projects aimed at holding back the rising waters. Few scientists believe the works will have a long-term effect. 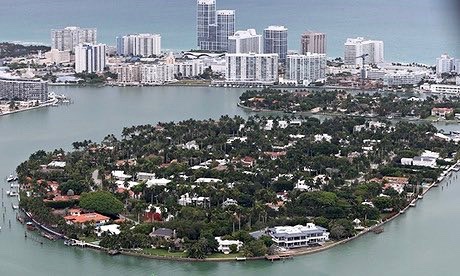 “There has been a rise of about 10 inches in sea levels since the 19th century – brought about by humanity’s heating of the planet through its industrial practices – and that is now bringing chaos to Miami Beach by regularly flooding places like Alton Road,” says Harold Wanless, a geology professor at the University of Miami. “And it is going to get worse. By the end of this century we could easily have a rise of six feet, possibly 10 feet. Nothing much will survive that. Most of the land here is less than 10 feet above sea level.”

What makes Miami exceptionally vulnerable to climate change is its unique geology. The city – and its satellite towns and resorts – is built on a dome of porous limestone which is soaking up the rising seawater, slowly filling up the city’s foundations and then bubbling up through drains and pipes. Sewage is being forced upwards and fresh water polluted. Miami’s low topography only adds to these problems. There is little land out here that rises more than six feet above sea level. Many condos and apartment blocks open straight on the edge of the sea. Of the total of 4.2 million US citizens who live at an elevation of four feet or less, 2.4 million of them live in south Florida.

At Florida International University, geologist Peter Harlem has created a series of maps that chart what will happen as the sea continues to rise. These show that by the time oceans have risen by four feet – a fairly conservative forecast – most of Miami Beach, Key Biscayne, Virginia Key and all the area’s other pieces of prime real estate, will be bathtubs. At six feet, Miami city’s waterfront and the Florida Keys will have disappeared. The world’s busiest cruise ship port, which handles four million passengers, will disappear beneath the waves. “This is the fact of life about the ocean: it is very, very powerful,” says Harlem.

Miami and its surroundings are facing a calamity worthy of the Old Testament. It is an astonishing story. Despite its vast wealth, the city might soon be consumed by the waves, for even if all emissions of carbon dioxide were halted tomorrow – a very unlikely event given their consistent rise over the decades – there is probably enough of the gas in the atmosphere to continue to warm our planet, heat and expand our seas, and melt polar ice. In short, there seems there is nothing that can stop the waters washing over Miami completely.

It a devastating scenario. But what really surprises visitors and observers is the city’s response, or to be more accurate, its almost total lack of reaction. The local population is steadily increasing; land prices continue to surge; and building is progressing at a generous pace. During my visit last month, signs of construction – new shopping malls, cranes towering over new condominiums and scaffolding enclosing freshly built apartment blocks – could be seen across the city, its backers apparently oblivious of scientists’ warnings that the foundations of their buildings may be awash very soon.