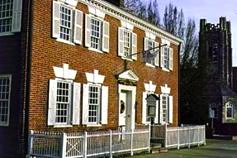 Princeton, New Jersey is one of the country’s most historic communities. Settled in the late 17th century, Princeton produced two signers of the Declaration of Independence and was the site of one of the Revolutionary War’s crucial battles. It served briefly as the nation’s capital when the Continental Congress met at the College of New Jersey (Princeton University) in 1783. A center for learning and culture since the colonial period, it has been home to world-renowned scholars, scientists, writers, and statesmen. George Washington walked its streets and three other United States Presidents, James Madison, Woodrow Wilson, and Grover Cleveland, lived in Princeton. Thomas Mann, T. S. Eliot, and F. Scott Fitzgerald all wrote in Princeton. Actor Paul Robeson spent his childhood here; his father, William Drew Robeson, was pastor of the Witherspoon Street Presbyterian Church in the Witherspoon-Jackson neighborhood. World-renowned scientists Albert Einstein and Robert Oppenheimer made the town their home. Throughout its history Princeton has been a dynamic community. Each wave of immigrants to the United States, from early Irish and Germans to eastern Europeans and Italians at the turn of the century, brought an influx to Princeton. Later arrivals included World War II refugees, Hungarians, Koreans, Southeast Asians, Haitians, East Indians, and Guatemalans.

Princeton University’s renowned Nassau Hall, built in 1756, was named a U.S. national historic landmark in 1960 for its importance in the country’s history.

When this building was completed in 1756, it was the largest academic building in the colonies, and it housed the entire College of New Jersey (now Princeton University) for nearly 50 years. Named for King William III, Prince of Orange and Nassau, it survived bombardment during the Revolutionary War, and two devastating fires in 1802 and 1855. In 1776 Nassau Hall was the first capitol of New Jersey, and in July of that same year a reading of the Declaration of Independence took place on the lawn. Nassau Hall also housed a British garrison prior to the Battle of Princeton in 1777, and it became the site of the nation’s capital when the Continental Congress met there between June and November of 1783. Today it is used for administrative offices, including the President’s office.

Early Painting of the Trent House

William Trent built his country estate north of Philadelphia, in New Jersey, at the Falls of the Delaware River about 1719. It was a large, imposing brick structure, built in the newest fashion. An “allee” of English cherry trees led from the entrance down to the ferry landing. Nearby, there were numerous outbuildings as well as grist, saw and fulling mills along the Assunpink Creek. In 1720 Trent laid out a settlement, which he incorporated and named “Trenton.”

A number of different people have resided in the Trent House during its long history. After Trent died, his son James sold “300 acres plus the brick dwelling house” to William Morris of Barbados who was the half-brother of his father’s second wife, Mary Coddington Trent.

1742 the house was leased to the first Governor of New Jersey, Lewis Morris. Gov. Morris used the house, then called “Bloomsbury Court,” as his official residence until 1746, despite the fact that it was then owned by the Governor of Pennsylvania, George Thomas.

During the American Revolution, the Trent House was occupied by Hessian forces and played a prominent role in several battles fought at Trenton during December of 1776. Later, Dr. William Bryant, the owner of the property, was expelled for his Tory sympathies. Colonel John Cox, a wealthy Philadelphia patriot and Deputy Quartermaster General of the Continental Army, acquired the house and turned the grounds into a supply depot for Washington’s army.

The house returned to prominence in 1835 when Philemon Dickerson, a prominent Jacksonian Democrat, purchased it. The following year he was elected Governor and used the Trent House as his Official Residence.

Again in 1854 it served as the Official Residence of the Governor when the property was purchased by Governor Rodman McCamley Price. Price, a Democrat, made his fortune in the San Francisco Gold Rush of 1849, returning to New Jersey to enter politics.

The last private owner of the Trent House, Edward A. Stokes, donated the building to the City of Trenton in 1929 with the condition that it be returned to its appearance during the William Trent era and be used as a library, art gallery or museum.

In 1758, the Barracks was the biggest building in Trenton. About 300 British and Irish soldiers were the first to live here. The building was made of stone and had dark red woodwork. There were about 20 soldiers’ rooms, each with two windows, a door and a fireplace. Twelve soldiers were housed in each room, with two men sleeping in each wooden bunk. The soldiers received rations of food, firewood, candles, cider, salt, and vinegar. There was a kitchen in the cellar, but most soldiers cooked in their rooms. In the center of the building was a little house with a staircase to the second floor and the balcony. The Officers’ House was fancier and more comfortable. Cows, pigs, chickens and horses were kept outside in the yard. The first soldiers to occupy the Barracks were two companies of Irishmen, the Inniskillin’s (1758-1759); two companies of lowland Scots, the First Regiment of Foot (1759-1760); and two companies of British soldiers with Swiss officers, the Royal American (1761-1762).

When the Revolutionary War started, the Barracks was used by American troops. British prisoners of war from St. John and Chambly, Canada, were imprisoned in the Officers House while four companies of the Second New Jersey Regiment of the Continental Line were raised here. In December, 1776, British and Hessian troops occupied Trenton. Some of them stayed in the Barracks. Colonists loyal to the English king also arrived so that they could be protected by the soldiers. During the First Battle of Trenton on Dec. 26, in a miraculously successful morning raid, General Washington captured many of the Hessians. The Americans returned to Trenton and used the Barracks. In 1777, the Barracks became an army hospital under Dr. Bodo Otto. Many soldiers and supplies passed through Trenton until the end of the war. The last soldiers in the Barracks may have been sick and wounded soldiers from the siege of Yorktown in 1781.

The first church established in Princeton, NJ, Mt. Pisgah African Methodist Episcopal Church was organized in 1832 by Samson Peters, a local preacher of Trenton AME church. The first place of worship was in a little frame schoolhouse on Witherspoon Street near the present location. The church was built on land purchased from Samuel Bayard in 1839 for the sum of $75. There is a strong possibility that the agreement for the purchase of the the land was in effect as early as 1835 and payment was completed in 1839. The corner stone bearing the date of “1835” was purchased by the Reverend Richard Robinson.

After a fire,the present church was rebuilt. The foundation was constructed under the jurisdiction of Reverend Spencer Logan. Reverend Theodore Gould was the pastor in 1860 at the time the church was completed.

The first parsonage purchased in 1877 was located on Jackson Street. The Trustees purchased this property for the sum of $1000. It is believed that the Reverend T.M. Steward was the pastor when it was purchased.

The only known representation of the 1766 Presbyterian Meeting House is shown on the seal of First Church. It was on the current site of Nassau Church with the axis of the sanctuary along Nassau Street.

The first sanctuary (1850) of Second Presbyterian Church, founded in 1847. It is now and office building at 190 Nassau Street.

This year, we Presbyterians who worship in Princeton will celebrate a significant anniversary — 250 years of local church history. The 2005-2006 church year will mark 250 years since the College of New Jersey (later Princeton University) moved to town, bringing with it regular worship services.

To celebrate this milestone, the Witherspoon Street and Nassau Presbyterian Churches have prepared a series of events in which we can all learn about, celebrate, and further our history. This church year will be a time to hear about our past, deepen our local mission and renew our connections with our sister church. Let’s all participate in this historic opportunity.