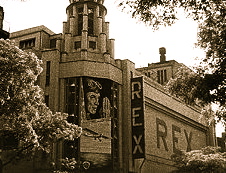 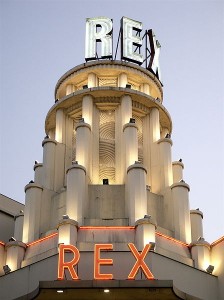 The Grand Rex is a cinema in Paris. It is noted for its sumptious decoration and its outsized main auditorium, which is the largest cinema theatre in Europe.

An atmospheric theatre in American parlance, the Grand Rex’s main auditorium features a starred ceiling and fairytale decorations on both sides of the screen, including water features. The theatre’s 2800 places are the most of any in Europe, and its 252 m2 sceen is the largest in Paris. The cinema’s external facade, out of proportion to neighboring buildings, features large neon signs and an art deco style tower.

The cinema is considered to be a landmark of art deco architecture.  A French government decree on 5 October 1981 listed the Cinéma Rex, its interior decor, roofs and facades as a Monument national. 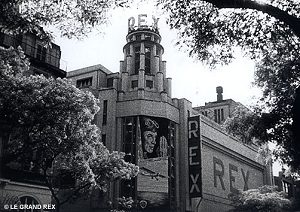 The Rex, as it was originally known, was built for Jacques Haïk, a wealthy film producer known for having introduced Charlie Chaplin to France. Haïk aimed to create the most beautiful movie theatre in Paris, where cinema-goers would have the illusion of watching a film in the open air. The design was by Auguste Bluysen, a French architect, with input by John Eberson, a prolific Romanian-American architect known for his atmospheric cinemas in North America. Construction began in 1931, and the cinema opened its doors the following year on the evening of 8 December.

During the Occupation, the Rex was requisitioned and became the Soldatenkino, reserved for German soldiers. In the 1950s, one of the first escalators in France was installed and inaugurated by Gary Cooper. Between 1974 and 1990, seven further screens were added in the basement. 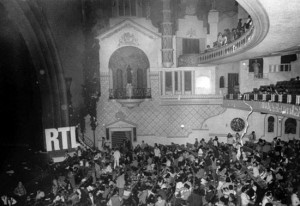 Since the 1950’s, the Grand Rex has specialised in major Hollywood and particularly Disney productions. Unlike most Parisian movie theatres, the Grand Rex shows most films in their French-dubbed versions.

The cinema is host to the Jules Verne Adventure Film Festival each April, a six-day event that attracts more than 48,000 attendees. A December highlight is the Féerie des eaux, an aquatic-themed event featuring 1200 on-stage jets of water, centering around a recently released family film.