You are here: Home / Education / Women Who Made History / Lauren Bacall 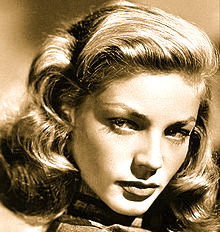 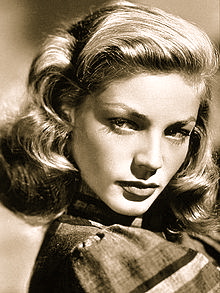 Lauren Bacall (/ˌlɔrən bəˈkɔːl/, born Betty Joan Perske; (September 16, 1924 – August 12, 2014) was an American actress of film, stage, and musical theatre, known for her distinctive husky voice and sultry looks. She began her career as a model.

She first emerged as a leading lady in the Humphrey Bogart film To Have and Have Not (1944) and continued on in the film noir genre, with appearances in Bogart movies The Big Sleep (1946), Dark Passage (1947), and Key Largo (1948), as well as comedic roles in How to Marry a Millionaire (1953) with Marilyn Monroe and Designing Woman (1957) with Gregory Peck. Bacall worked on Broadway in musicals, earning Tony Awards for Applause in 1970 and Woman of the Year in 1981. Her performance in the movie The Mirror Has Two Faces (1996) earned her a Golden Globe Award and an Academy Award nomination.

In 1999, Bacall was ranked 20th out of the 25 actresses on the AFI’s 100 Years…100 Stars list by the American Film Institute. In 2009, she was selected by the Academy of Motion Picture Arts and Sciences to receive an Academy Honorary Award “in recognition of her central place in the Golden Age of motion pictures.”

Bacall with Humphrey Bogart in 1946

Bacall was born Betty Joan Perske on September 16, 1924, in the Bronx, New York, the only child of Natalie (née Weinstein-Bacal), a secretary who later legally changed her surname to Bacall, and William Perske, who worked in sales. Both her parents were Jewish. Her mother emigrated from Romania through Ellis Island and her father was born in New Jersey to Polish-born parents.

Through her father, she was a relative of Shimon Peres, the ninth President of Israel (though not a first cousin, as has often been reported). Peres has stated, “In 1952 or 1953 I came to New York… Lauren Bacall called me, said that she wanted to meet, and we did. We sat and talked about where our families came from, and discovered that we were from the same family… but I’m not exactly sure what our relation is… It was she who later said that she was my cousin, I didn’t say that.” Her parents divorced when she was five, and she took the Romanian form of her mother’s last name, Bacall. She no longer saw her father and formed a very close bond with her mother, who came to live in California after Bacall became a movie star.

As a teenage fashion model, she appeared on the cover of Harper’s Bazaar (the cover has since been described as ‘iconic’), as well as in magazines such as Vogue. She was noted for her “cat-like grace, tawny blonde hair and blue-green eyes.” 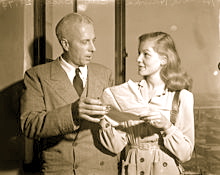 Howard Hawks and Bacall in 1943

In 1941, Bacall took lessons at the American Academy of Dramatic Arts, where she was classmates with Kirk Douglas, while working as a theatre usher and fashion model.

She made her acting debut on Broadway in 1942, at age 17, as a walk-on in Johnny 2 X 4. According to Bacall’s autobiography, she and a girlfriend won an opportunity in 1940 to meet her idol Bette Davis at Davis’s hotel. Years later, Davis visited Bacall backstage to congratulate her on her performance in Applause, a musical based on the film All About Eve in which Davis had starred. Davis reportedly told Bacall, “You’re the only one who could have played the part.” While she was working as a fashion model, Howard Hawks’ wife Nancy spotted her on the cover of Harper’s Bazaar magazine, and urged Hawks to have her take a screen test for To Have and Have Not. Hawks had asked his secretary to find out more about her, but the secretary misunderstood and sent her a ticket to Hollywood for the audition.

Hawks signed her to a seven-year personal contract, brought her to Hollywood, gave her $100 salary a week, and began to manage her career. Hawks changed her first name to Lauren, and Perske adopted “Bacall,” a variant of her mother’s maiden name, as her new surname. Nancy Hawks took Bacall under her wing.

Nancy dressed Bacall stylishly and guided her in matters of elegance, manners and taste. Bacall was trained to make her voice lower, deeper, and sexier. In To Have and Have Not, Bacall’s character used Nancy Hawks’ nickname “Slim” and Bogart used Howard Hawks’ nickname “Steve.” 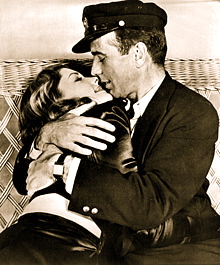 Bacall in her first movie, To Have and Have Not with Humphrey Bogart, 1944

During screen tests for To Have and Have Not (1944), Bacall was nervous. To minimize her quivering, she pressed her chin against her chest and to face the camera, tilted her eyes upward. This effect became known as “The Look,” Bacall’s trademark. 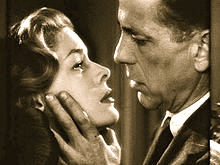 Bacall and Bogart in Dark Passage

On the set, Humphrey Bogart, who was married to Mayo Methot, initiated a relationship with Bacall several weeks into shooting and they began seeing each other. On a visit to the National Press Club in Washington, D.C., on February 10, 1945, Bacall’s press agent, chief of publicity at Warner Bros. Charlie Enfield, asked the 20-year-old Bacall to sit on the piano which was being played by Vice-President of the United States Harry S. Truman.

After To Have and Have Not, Bacall was seen opposite Charles Boyer in Confidential Agent (1945), which was poorly received by the critics. She appeared with Bogart in the films noir The Big Sleep (1946) and Dark Passage (1947) and John Huston’s melodramatic suspense film Key Largo (1948) with Bogart and Edward G. Robinson. She was cast opposite Gary Cooper in Bright Leaf (1950). 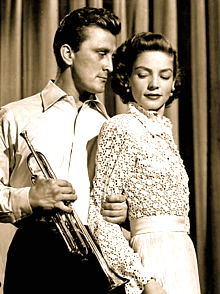 Bacall turned down scripts she did not find interesting and thereby earned a reputation for being difficult. For her leads in a string of films, she received favorable reviews. In Young Man with a Horn (1950), co-starring Kirk Douglas, Doris Day, and Hoagy Carmichael, Bacall played a two-faced femme fatale. This movie is often considered the first big-budget jazz film.

During 1951–1952, Bacall co-starred with Bogart in the syndicated action-adventure radio series Bold Venture. In 1953, Bacall starred in the CinemaScope comedy How to Marry a Millionaire, a runaway hit. Billed third under Marilyn Monroe and Betty Grable, Bacall got positive notices for her turn as the witty gold-digger, Schatze Page. According to her autobiography, Bacall declined the coveted invitation from Grauman’s Chinese Theatre to press her hand- and footprints in the theatre’s cemented forecourt at the Los Angeles premiere of the film. 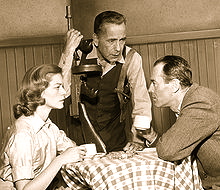 Bacall, Bogart and Henry Fonda in the television version of The Petrified Forest

In 1955, a television version of Bogart’s own breakthrough film, The Petrified Forest, was performed as a live installment of Producers’ Showcase, a weekly dramatic anthology, featuring Bogart as Duke Mantee, Henry Fonda as Alan, and Bacall as Gabrielle, the part originally played in the 1936 movie by Bette Davis. Bogart had no problem performing his role live since he had originally played the part on Broadway with the subsequent movie’s star Leslie Howard, who had secured a film career for Bogart by insisting that Warner Bros. cast him in the movie instead of Edward G. Robinson; Bogart and Bacall named their daughter “Leslie Howard Bogart” in gratitude.

In the late 1990’s, Bacall donated the only known kinescope of the 1955 performance to The Museum Of Television & Radio (now the Paley Center for Media), where it remains archived for viewing in New York City and Los Angeles. 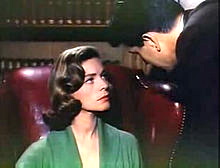 Written on the Wind, directed by Douglas Sirk in 1956, is now considered a classic tear-jerker. Appearing with Rock Hudson, Dorothy Malone and Robert Stack, Bacall played a career woman whose life is unexpectedly turned around by a family of oil magnates. Bacall wrote in her autobiography that she did not think much of the role. While struggling at home with Bogart’s battle with esophageal cancer, Bacall starred with Gregory Peck in Designing Woman. It was directed by Vincente Minnelli and released in New York on May 16, 1957, four months after Bogart succumbed to cancer on January 14.

Bacall was seen in two more films in the 1950s; the Jean Negulesco-directed melodrama The Gift of Love (1958), in which her co star was Robert Stack, and the adventure film North West Frontier (1959), which was a box office hit.

Bacall suffered a massive stroke on August 12, 2014, at her longtime home in The Dakota, an Upper West Side apartment building overlooking Central Park in Manhattan. She was pronounced dead at New York Presbyterian Hospital. She was 89.

In 1980, Kathryn Harrold played Bacall in the TV movie Bogie, which was directed by Vincent Sherman and based on the novel by Joe Hyams. Kevin O’Connor played Bogart. The movie focused primarily upon the disintegration of Bogart’s third marriage to Mayo Methot, played by Ann Wedgeworth, when Bogart met Bacall and began an affair with her.