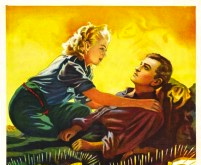 White hunter Allan Quartermain and his enigmatic guide help a young Irish woman locate her missing father in unexplored Darkest Africa. Director: Robert Stevenson, Writers: H. Rider Haggard (novel), Michael Hogan, Stars: Paul Robeson, Cedric Hardwicke and Roland Young. Storyline: Fortune hunter Patrick O’Brien has left his daughter Kathy and guide Umbopa to trek across the desert in hopes of finding the fabled diamond mines of Solomon. Worried about her father, Kathy persuades hunter Allan Quartermain to lead a party to rescue him. After surviving the desert they are found by natives and brought to their chief, Twala. Umbopa reveals himself to be the true heir to the tribal throne, having been exiled years earlier by Twala and the tribal witch, Gagool. Quartermain’s only hope to gain access to the mines and the possible rescue of O’Brien is to try to help Umbopa regain his rightful place as chief. 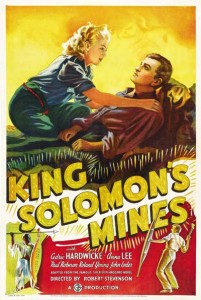 Although versions of King Solomon’s Mines were released in 1950 and 1985, this film version follows the original novel faithfully, except for the addition of a white female lead (the novel had an interracial romance subplot) and some musical interludes deliberately added to give Paul Robeson a chance to sing. In contrast to later adaptations, it depicts Allan Quartermain (not Quatermain, as in the book) as a professorial type uninterested in romance, as in the book.

In 1882, Irish dream chaser Patrick “Patsy” O’Brien (Arthur Sinclair) and his daughter Kathy (Anna Lee) have failed to strike it rich in the diamond mines of Kimberley, South Africa. They persuade a reluctant Allan Quartermain (Sir Cedric Hardwicke) to give them a lift to the coast in his wagon.

Along the way, they encounter another wagon carrying two men in bad shape. Umbopa (Paul Robeson) recovers, but Silvestra (Arthur Goullet) dies after boasting to Quartermain that he has found the way to the fabled mines of Solomon. Patsy finds the dead man’s map. He sneaks off during the night, unwilling to risk his daughter’s life. Kathy is unable to persuade Quatermain to follow him. Instead, they rendezvous with Quartermain’s new clients, Sir Henry Curtis (John Loder) and retired navy Commander Good (Roland Young), out for a bit of big game hunting.

Kathy steals Quartermain’s wagon to go after her father. When they catch up with her, she refuses to go back with them, so they and Umbopa accompany her across the desert and over the mountains, as shown on the map. During the arduous trek, Curtis and Kathy fall in love. On the other side of the mountains, they are surrounded by unfriendly natives and taken to the kraal of their chief, Twala (Robert Adams), to be questioned. Twala takes them to see the entrance of the mines, guarded by the feared witch doctor Gagool (an uncredited Sydney Fairbrother).

That night, Umbopa reveals that he is the son of the former chief, who was treacherously killed by the usurper Twala. He meets with dissidents, led by Infadoos (Ecce Homo Toto), who are fed up with Twala’s cruel reign. Together, they plot an uprising for the next day, during the ceremony of the “smelling out of the evildoers.” However, Umbopa needs Quartermain to come up with something that will counter (in the natives’ minds) the magic of Gagool.

During the rite, Gagool chooses several natives, who are killed on the spot. Recalling making a bet on last year’s Derby Day, Good notices in his diary that there will be a total solar eclipse that day at exactly 11:15 A.M. The quick-thinking Quartermain predicts it as Gagool approaches Umbopa. Umbopa reveals his true identity to the people during the height of the eclipse and the rebellion erupts. Both sides gather their forces; during the ensuing battle, Curtis kills Twala, ending the civil war.

In the fighting, Kathy slips away to the mine to look for her father. She finds him inside, immobilised by a broken leg, but clutching a pouch full of diamonds. It was revealed that the mine was connected to a volcano. Quartermain, Curtis and Good follow her, but Gagool sets off a rockfall to seal them in. Umbopa pursues Gagool back into the mine, where the witch doctor is crushed by falling rocks. The new chief manages to free his friends and gives them an escort to help them cross the desert.