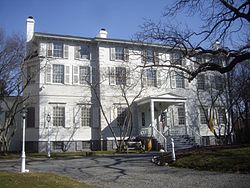 In 1760, when lawyer William Livingston, a member of the prominent Livingston clan, was planning to build a country home, he bought 120 acres in what was then sleepy, bucolic Elizabethtown, New Jersey, just across the river from his New York home. For the next 12 years, Livingston developed the extensive grounds, gardens and orchards and oversaw the building of a beautiful 14-room Georgian-style home. Finally, in 1773, Livingston and his wife, the former Susannah French of New Brunswick, and their children moved to Liberty Hall on a full-time basis, but the peace and quiet Livingston sought was short-lived.

From 1774 to 1776, Livingston put his retirement on hold and served as a member of the First and Second Continental Congress and as brigadier general of the New Jersey militia. He was also a signer of the United States Constitution. On August 31, 1776, Livingston became New Jersey’s first elected governor. The ensuing war years were difficult ones for the governor, who spent them on the run from British troops. Finally, after the war in 1783, he was able to return home, which was heavily damaged by both British and American troops. While juggling the demands of governing, Livingston also managed to pursue his great love of gardening and agriculture, still evident at Liberty Hall today.

Governor Livingston served as governor for 14 years until his death on July 25, 1790. He is credited with making the New Jersey governorship one of the strongest political positions in the country.