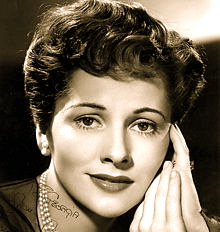 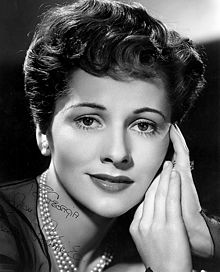 Joan de Beauvoir de Havilland (born October 22, 1917 − died December 15, 2013), known professionally as Joan Fontaine, was a British-American actress. Born in Japan to British parents, de Havilland and her older sister Olivia de Havilland moved to California in 1919. Fontaine began her career on the stage in 1935 and signed a contract with RKO Pictures that same year.

In 1941, she received an Academy Award nomination for Best Actress for her role in Rebecca, directed by Alfred Hitchcock. The following year, she won the Academy Award for Best Actress for Hitchcock’s Suspicion (1941) making Fontaine the only actor to ever win an Academy Award in a film directed by Hitchcock.  Fontaine and sister Olivia de Havilland are the only siblings to have won lead acting Academy Awards. During the 1940s to the 1990s, Fontaine continued her career in roles on the stage and in radio, television and film. She released her autobiography, No Bed of Roses, in 1978. After a career spanning over fifty years, Fontaine made her last on-screen appearance in 1994.

Fontaine lived in Carmel-by-the-Sea, California, where she owned a home, Villa Fontana. It was there that she died of natural causes at the age of 96 in 2013.

Joan de Havilland was born in Tokyo, Japan, to British parents. Her father, Walter Augustus de Havilland (1872–1968), was educated at the University of Cambridge and served as an English professor at the Imperial University in Tokyo before becoming a patent attorney with a practice in Japan.  Her mother, Lilian Augusta (née Ruse; 11 June 1886 – 20 February 1975), was educated at the Royal Academy of Dramatic Art in London, and became a stage actress who left her career after going to Tokyo with her husband.  Her mother would return to work with the stage name “Lillian Fontaine” after her daughters achieved prominence in the 1940s. Joan’s paternal cousin was Sir Geoffrey de Havilland (1882–1965), an aircraft designer known for the De Havilland Mosquito, and founder of the aircraft company which bore his name. Her paternal grandfather, the Reverend Charles Richard de Havilland, was from a family from Guernsey, in the Channel Islands.

Fontaine’s parents married in 1914 and separated in 1919, when Lilian decided to end the marriage after discovering that her husband used the sexual services of geisha girls; the divorce was not finalized, however, until February 1925.

Taking a physician’s advice, Lilian de Havilland moved Joan—reportedly a sickly child who had developed anaemia following a combined attack of the measles and a streptococcal infection—and her elder sister, Olivia, to the United States.  The family settled in Saratoga, California, and Fontaine’s health improved dramatically. She was educated at Los Gatos High School, and was soon taking diction lessons alongside her elder sister. When she was 16 years old, Fontaine returned to Japan to live with her father. There she attended the American School in Japan, graduating in 1935.

Fontaine made her stage debut in the West Coast production of Call It a Day (1935) and was soon signed to an RKO contract. Her film debut was a small role in No More Ladies (also 1935) in which she was credited as Joan Burfield.

Although Fontaine, on contract with RKO, had already made her screen appearance inNo More Ladies, a series of other minor roles followed, in A Million to One and Quality Street (both 1937), opposite Katharine Hepburn. The studio considered her a rising star, and touted The Man Who Found Himself (also 1937) as her first starring role, placing a special screen introduction, billed as the “new RKO screen personality” after the end credit.  She next appeared in a major role alongside Fred Astaire in his first RKO film without Ginger Rogers: A Damsel in Distress (1937) but audiences were disappointed and the film flopped. She continued appearing in small parts in about a dozen films, including The Women (1939) but failed to make a strong impression and her contract was not renewed when it expired in 1939.

Fontaine’s luck changed one night at a dinner party when she found herself seated next to producer David O. Selznick. She and Selznick began discussing the Daphne du Maurier novel Rebecca, and Selznick asked her to audition for the part of the unnamed heroine. She endured a grueling six-month series of film tests, along with hundreds of other actresses, before securing the part some time before her 22nd birthday.

Rebecca, starring Laurence Olivier alongside Fontaine, marked the American debut of British director Alfred Hitchcock. In 1940, the film was released to glowing reviews and Fontaine was nominated for an Academy Award for Best Actress.  Fontaine did not win that year (Ginger Rogers took home the award for Kitty Foyle), but Fontaine did win the following year for Best Actress in Suspicion, which co-starred Cary Grant and was also directed by Hitchcock.  This is the only Academy Award winning performance directed by Hitchcock. During the 1940s, Fontaine excelled in romantic melodramas. Among her memorable films during this time were The Constant Nymph (1943) (for which she received her third Academy Award nomination), Jane Eyre (1944), Ivy (1947), and Letter from an Unknown Woman (1948).

Her film successes slowed a little during the 1950s and she also began appearing in television and on the stage. She won good reviews for her role on Broadway in 1954 as Laura in Tea and Sympathy, opposite Anthony Perkins. She also appeared in numerous radio shows during the 1940s for the Lux Radio Theater.

During the 1960s, Fontaine appeared in several stage productions, including Private Lives,Cactus Flower and an Austrian production of The Lion in Winter. Her last theatrical film was The Witches (1966), which she also co-produced. She continued appearing in film and television roles throughout the 1970s and 1980’s, and was nominated for an Emmy Award for the soap opera, Ryan’s Hope in 1980.

Fontaine’s autobiography, No Bed of Roses, was published in 1978. In 1982, she was head of the jury at the 32nd Berlin International Film Festival.

Fontaine’s last role for television was in the 1994 TV film Good King Wenceslas, after which she retired to her estate, Villa Fontana, in Carmel-by-the-Sea, California where she would spend time in her gardens and with her dogs.

For her contribution to the motion picture industry, Fontaine has a star on the Hollywood Walk of Fame at 1645 Vine Street.

Fontaine held dual citizenship; she was British by birthright (both her parents were British) and became an American citizen in April 1943.

Fontaine was married and divorced four times. Her first marriage was to actor Brian Aherne, in 1939 in Del Monte, California; they divorced in April 1945.

In May 1946, she married actor/producer William Dozier in Mexico City. They had a daughter, Deborah Leslie, in 1948 and separated in 1949.  The following year, Fontaine filed for divorce, charging Dozier with desertion. Their divorce was finalized in January 1951.

Fontaine’s third marriage was to producer and writer Collier Young on 12 November 1952. They separated in May 1960, and Fontaine filed for divorce in November 1960. Their divorce was finalized in January 1961.  Fontaine’s fourth and final marriage was to Sports Illustrated golf editor Alfred Wright, Jr, on 23 January 1964 in Elkton, Maryland; they divorced in 1969.

While in South America for a film festival in 1951, Fontaine met a 4-year-old Peruvian girl named Martita, and informally adopted her.  Fontaine met Martita while visiting Incan ruins where Martita’s father worked as a caretaker. Martita’s parents allowed Fontaine to become Martita’s legal guardian in order to give the child a better life. Fontaine promised Martita’s parents she would send the girl back to Peru to visit when Martita was 16 years old. When Martita turned 16, Fontaine bought her a round-trip ticket to Peru, but Martita refused to go and opted to run away. Fontaine and Martita became estranged following the incident. While promoting her autobiography in 1978, Fontaine addressed the issue stating, “Until my adopted daughter goes back to see her parents, she’s not welcome. I promised her parents. I do not forgive somebody who makes me break my word.” Fontaine and Gary Cooper holding their Oscars at the Academy Awards, 1942

Fontaine and her sister, Olivia de Havilland, are the only siblings to have won lead acting Academy Awards. De Havilland was the first to become an actress; when Fontaine tried to follow her lead, their mother, who allegedly favored de Havilland, refused to let her use the family name. Subsequently, Fontaine had to invent a name, taking first Joan Burfield, and later Joan Fontaine. Biographer Charles Higham records that the sisters had an uneasy relationship from early childhood, when de Havilland would rip up the clothes Fontaine had to wear as hand-me-downs, forcing Fontaine to sew them back together. A large part of the resentment between the sisters allegedly stemmed from Fontaine’s belief that de Havilland was their mother’s favorite child.

De Havilland and Fontaine were nominated for an Academy Award for Best Actress in 1942. Fontaine won that year for her role in Alfred Hitchcock‘s Suspicion over de Havilland’s performance in Hold Back the Dawn. Higham states that Fontaine “felt guilty about winning given her lack of obsessive career drive…”. Higham has described the events of the awards ceremony, stating that as Fontaine stepped forward to collect her award, she pointedly rejected de Havilland’s attempts at congratulating her and that de Havilland was both offended and embarrassed by her behavior. Several years later, de Havilland remembered the slight and exacted her own revenge by brushing past Fontaine, who was waiting with her hand extended, because de Havilland allegedly took offense at a comment Fontaine had made about de Havilland’s husband. De Havilland’s relationship with Fontaine continued to deteriorate after the two incidents. Higham has stated that this was almost the last straw in establishing what became a lifelong feud, but the sisters did not completely stop speaking to each other until 1975. According to Fontaine, de Havilland did not invite her to a memorial service for their mother, who had recently died. De Havilland claims she informed Fontaine, but Fontaine brushed her off, claiming she was too busy to attend.

Higham records that Fontaine had an estranged relationship with her own daughters as well, possibly because she discovered that they were secretly maintaining a relationship with de Havilland.  Both sisters refused to comment publicly about their relationship. In a 1979 interview, Fontaine claimed the reason the sisters stopped speaking was that de Havilland wanted their mother (who was suffering from cancer) to be treated surgically, at the advanced age of 88, which Fontaine apparently did not think was a good idea. Fontaine claims that after their mother, Lillian Fontaine (neé Lilian Augusta Ruse; formerly Mrs de Havilland) died, Olivia did not bother to try to find out where she could be reached (Fontaine was on tour in a play). Instead, de Havilland sent a telegram, which did not arrive until two weeks later at Fontaine’s next stop.

The sisterly feud lasted until the death of Fontaine in December 2013, even then, Fontaine was determined to have the last word:

“I married first, won the Oscar before Olivia did, and if I die first, she’ll undoubtedly be livid because I beat her to it!”