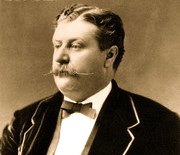 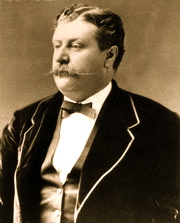 Was known variously as “Big Jim,” “Diamond Jim,” and “Jubilee Jim” – was an American stockbroker and corporate executive who has been referred to as one of the “robber barons” of the Gilded Age.

Fisk was born in the hamlet of Pownal, Vermont, in the township of Bennington on April Fool’s Day. After a brief period in school, he ran away in 1850 and joined Van Amberg’s Mammoth Circus & Menagerie. Later, he became a hotel waiter, and finally adopted the business of his father, a peddler. He applied what he learned in the circus to his peddling and grew his father’s business. He then became a salesman for Jordan Marsh, a Bostondry goods firm. A failure as a salesman, he was sent to Washington, D.C., in 1861 to sell textiles to the government. By his shrewd dealing in army contracts during the Civil War, and, by some accounts, cotton smuggling across enemy lines – in which he enlisted the help of his father – he accumulated considerable wealth, which he soon lost in speculation.

In 1864 Fisk became a stockbroker in New York, and was employed by Daniel Drew as a buyer. He aided Drew in the Erie War against Cornelius Vanderbilt for control of the Erie Railroad. This resulted in Fisk and Jay Gould becoming members of the Erie directorate, and subsequently, a well-planned raid netted Fisk and Gould control of the railroad. The association with Gould continued until Fisk’s death.  Fisk and Gould carried financial buccaneering to extremes: their program included an open alliance with Boss Tweed, the wholesale bribery of legislatures, and the buying of judges. Their attempt to corner the gold market culminated in the fateful Black Friday of September 24, 1869. Though many investors were ruined. Fisk and Gould escaped significant financial harm.

Fisk married Lucy Moore in 1854, when he was 19 and she was 15. Lucy was an orphan, raised by an uncle from Springfield, Massachusetts. She tolerated Fisk’s many extramarital affairs and lived with a woman friend in Boston, suggesting she may have been a lesbian. Regardless, they remained close, with Fisk visiting her every few weeks and spending summers and vacations with her every chance he could.  In New York, Fisk had a relationship with Josie Mansfield (1842?-1931), a showgirl. Fisk housed Josie in an apartment a few doors down from the Erie Railroad headquarters on West 23rd Street and had a covered passage built linking the back doors of the headquarters and her apartment building. Fisk’s relationship with Mansfield scandalized New York society. Mansfield eventually fell in love with Fisk’s business associate Edward S. Stokes (1840–1901), a man noted for his good looks. Stokes left his wife and family, and Mansfield left Fisk.

In a bid for money, Mansfield and Stokes tried to extort money from Fisk by threatening the publication of letters written by Fisk to Mansfield that allegedly proved Fisk’s legal wrongdoings. A legal and public relations battle followed, but Fisk refused to pay Mansfield anything. Increasingly frustrated and flirting with bankruptcy, Stokes shot and killed Fisk in New York City on January 6, 1872 in the Grand Central Hotel.   Fisk gave a dying declaration identifying Stokes as the killer, and Stokes served four years of a six-year prison sentence for manslaughter. Fisk is buried in the Prospect Hill Cemetery in Brattleboro Vermont.

Fisk was vilified by high society for his amoral and eccentric ways and by many pundits of the day for his business dealings; but he was loved and mourned by the workingmen of New York and the Erie Railroad. He was known as “Colonel” for being the nominal commander of the 9th New York National Guard Infantry Regiment, although his only experience of military action with this unit was an inglorious role in the Orange Riot of July 12, 1871.