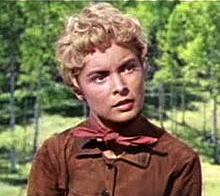 Janet Leigh: A life in Hollywood

Our 1996 documentary on the life and career of Janet Leigh. 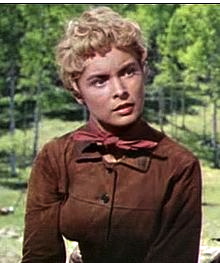 Jeanette Helen Morrison (July 6, 1927 – October 3, 2004), known professionally as Janet Leigh, was an American actress and author. She is best remembered for her performance in Psycho (1960), for which she was awarded the Golden Globe Award for Best Supporting Actress and received an Academy Award nomination.

Discovered by actress Norma Shearer, Leigh secured a contract with Metro-Goldwyn-Mayer and made her film debut with a starring role in The Romance of Rosy Ridge in 1947. Over the following years, she appeared in several popular films of a wide variety of genres, including Act of Violence (1948), Little Women (1949), Holiday Affair (1949), Angels in the Outfield (1951), Scaramouche (1952), The Naked Spur (1953), Walking My Baby Back Home (1953) and Living It Up (1954).

After two brief marriages at an early age, Leigh married actor Tony Curtis in 1951, and they had two children together, Jamie Lee Curtis and Kelly Curtis. During their high-profile marriage, the couple starred in five films together: Houdini (1953), The Black Shield of Falworth (1954), The Vikings (1958), The Perfect Furlough (1958) and Who Was That Lady? (1960). They also had a scene together in another film, the musical comedy Pepe (1960). Leigh played mostly dramatic roles during the latter half of the 1950s, in films such as Safari (1955), and Touch of Evil (1958). She continued to appear occasionally in films and television, including The Manchurian Candidate (1962) and Bye Bye Birdie (1963), as well as two films with her daughter, Jamie Lee Curtis: The Fog (1980) and Halloween H20: 20 Years Later (1998).

Leigh died in 2004 at the age of 77, following a year-long battle with vasculitis, an inflammation of the blood vessels. She was survived by her fourth husband of 42 years, Robert Brandt, and her two daughters. 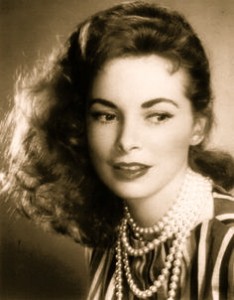 The only child of Helen Lita (née Westergaard) and Frederick Robert Morrison, Leigh was born Jeanette Helen Morrison in Merced, California, where she also grew up. Her maternal grandparents were immigrants from Denmark, and she also had Scotch-Irish and German ancestry. In winter 1945, she was discovered by actress Norma Shearer, whose late husband Irving Thalberg had been a senior executive at Metro-Goldwyn-Mayer. Shearer showed talent agent Lew Wasserman a photograph she had seen of Leigh while vacationing at Sugar Bowl, the ski resort where the girl’s parents worked. Shearer later recalled that “that smile made it the most fascinating face I had seen in years. I felt I had to show that face to somebody at the studio.” Leigh left the College of the Pacific, where she was studying Music and Psychology, after Wasserman secured a contract with MGM, despite having no acting experience. She was placed under the tutelage of drama coach Lillian Burns. 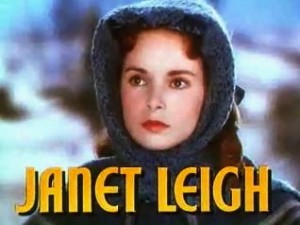 Leigh in the trailer for Little Women (1949)

Prior to beginning her movie career, Leigh was a guest star on the radio dramatic anthology The Cresta Blanca Hollywood Players. Her initial appearance on radio at age 19  was in the program’s production “All Through the House,” December 24, 1946.

Leigh made her film debut in the big budget film The Romance of Rosy Ridge in 1947, as the romantic interest of Van Johnson’s character. She got the role when performing Phyllis Thaxter’s long speech in Thirty Seconds Over Tokyo (1944) for the head of the studio talent department in 1946. During the shooting, Leigh’s name was first changed to “Jeanette Reames,” then to “Janet Leigh” and finally back to her birth name “Jeanette Morrison,” because “Janet Leigh” resembled Vivien Leigh too much. However, Johnson did not like the name and it was finally changed back to “Janet Leigh.” Leigh initially left college for a film career, but enrolled in night school at the University of Southern California in 1947. 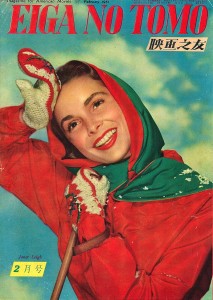 Immediately after the film’s release, Leigh was cast opposite Walter Pidgeon and Deborah Kerr in If Winter Comes (1947) in the summer of 1947. Furthermore, due to the box office success of The Romance of Rosy Ridge, Leigh and Johnson were teamed up again in a film project called The Life of Monty Stratton in August 1947. The project was eventually shelved and released in 1949 as The Stratton Story, starring James Stewart and June Allyson. Another film that Leigh was set to star in, before being replaced, was Alias a Gentleman, in which she was cast in April 1947. By late 1947, Leigh was occupied with the shooting of the Lassie film Hills of Home (1948), the first film in which she received star billing. In late 1948, Leigh was hailed the “No. 1 glamour girl” of Hollywood, although known for her polite, generous and down-to-earth persona.

Many movies followed, notably the 1949 box-office hits Little Women, based on the novel by Louisa May Alcott, and Holiday Affair with Robert Mitchum. In October 1949, Leigh began filming the Cold War action film Jet Pilot with John Wayne. The film had a notoriously troubled production, with several directorial changes and a filming schedule that dragged on until May 1953. Its release was then delayed another four years due to the extensive (and obsessive) re-editing process by producer Howard Hughes, before finally hitting theaters in 1957. 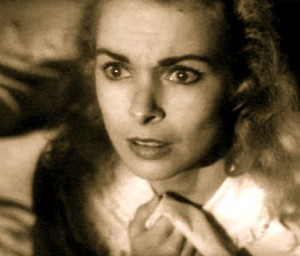 Throughout the 1950s, Leigh tackled a wide variety of film genres. She proved versatile, starring in films as diverse as the baseball farce Angels in the Outfield in 1951 and the tense western The Naked Spur in 1953. The following year, she had a supporting role in the Dean Martin and Jerry Lewis comedy Living It Up, later starring with Jerry Lewis once more in Three On a Couch. In 1955, Leigh played the title role in the musical comedy My Sister Eileen, co-starring Jack Lemmon, Betty Garrett and Dick York.

Her initial roles were ingenues based on characters from historical literature, for example in Scaramouche opposite Stewart Granger. By 1956, she moved to more complex roles, such as the role of Linda Latham in Safari opposite Victor Mature.

In 1958, Leigh starred as Susan Vargas in the Orson Welles film noir classic Touch of Evil (1958) with Charlton Heston, a film with numerous similarities to Alfred Hitchcock’s later film Psycho, which was produced two years after Touch of Evil. 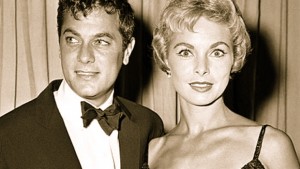 Her most famous performance was as Marion Crane in the Alfred Hitchcock film Psycho (1960). The fact that the star died early in the movie violated narrative conventions of the time. She received a Golden Globe Award for Best Supporting Actress and was nominated for the Academy Award for Best Supporting Actress. Leigh was so traumatized by the film’s iconic shower scene that she went to great lengths to avoid showers for the rest of her life.

Leigh had starring roles in many other films, including The Manchurian Candidate (1962) with Frank Sinatra, and Bye Bye Birdie (1963) based on the hit Broadway show. Following those two films, Leigh scaled back her acting work and turned down several roles, including the role of Simone Clouseau in The Pink Panther, because she didn’t want to go off on location and away from her family.

Leigh worked primarily in television from 1967 onward. Her initial TV appearances were on anthology programs such as Bob Hope Presents the Chrysler Theatre and The Red Skelton Hour, and later, Tales of the Unexpected. She also starred in several made-for-TV films, most notably the off-length (135 minutes instead of the usual 100) The House on Greenapple Road, which premiered on ABC in January 1970 to high ratings. In 1975, Leigh played a retired Hollywood song and dance star opposite Peter Falk and John Payne in the Columbo episode Forgotten Lady. The episode utilizes footage of Leigh from the film Walking My Baby Back Home (1953).

Her many guest appearances on TV series include The Man From U.N.C.L.E. two-part episode, “The Concrete Overcoat Affair,” in which she played a sadistic Thrush agent named Miss Dyketon, a highly provocative part for mainstream TV at the time. The two-part episode was released in Europe as a feature film in 1967, entitled The Spy in the Green Hat. She also appeared in the title role in the 1970 episode “Jenny” of The Virginian, the Murder, She Wrote 1987 episode, “Doom with a View,” as “Barbara LeMay” in an episode of The Twilight Zone in 1989 and the Touched by an Angel episode, “Charade,” in 1997. She guest-starred twice as different characters on both Fantasy Island and The Love Boat. In 1973, she appeared in the episode “Beginner’s Luck” of the romantic anthology series Love Story.

Leigh appeared in two horror films with her daughter, Jamie Lee Curtis, playing a major role in The Fog (1980), and making a brief cameo appearance in Halloween H20: 20 Years Later (1998).

Leigh is also the author of four books. Her first, the memoir There Really Was a Hollywood (1984), became a New York Times bestseller. In 1995, she published the non-fiction book Psycho: Behind the Scenes of the Classic Thriller. In 1996, she published her first novel, House of Destiny, which explored the lives of two friends who forged an empire that would change the course of Hollywood’s history. The book’s success spawned a follow-up novel, The Dream Factory (2002), which was set in Hollywood during the height of the studio system. 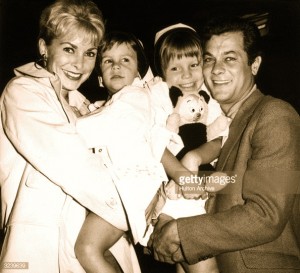 Leigh married her third husband, Tony Curtis, on June 4, 1951. They had two children, Kelly and Jamie Lee, who both subsequently became actresses. Curtis had divorce papers served to Leigh on the set of The Manchurian Candidate. The couple announced their separation to the press in March 1962. Though it was widely reported that Curtis left Leigh for his Taras Bulba co-star and future wife, Christine Kaufmann, Curtis later stated that their marriage had effectively ended a year earlier.

On September 15, 1962, Leigh married stockbroker Robert Brandt. They remained married for 42 years until her death in 2004.

She served on the board of directors of the Motion Picture and Television Foundation, a medical-services provider for actors.

Leigh was awarded an honorary Doctor of Fine Arts degree at the University of the Pacific in Stockton, California, on May 14, 2004.

Leigh was a Democrat and appeared alongside Tony Curtis at the 1960 Democratic National Convention.