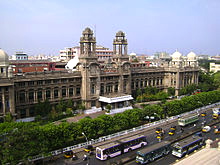 British India from the view point of John Sergeant (BBC). A must watch documentary for all Indians.  John Sergeant embarks on a unique 3,000 mile journey through the history of the greatest legacy the British left to India – its rail network. The biggest in Asia, it runs on 40,000 miles of track and reaches every corner of the subcontinent. Proposed in 1853 by Governor General Lord Dalhousie, it would become the biggest engineering project of its time and instrumental in every chapter of India’s history.  Starting in Kolkata, Sergeant traverses India from east to west, travels through turbulent Bihar state, visits the Victorian railway town of Jamalpur, and discovers why the construction of the Dufferin Bridge at Varanasi resulted in Victorian technology and ingenuity clashing with ancient religion, before ending his journey at the border with Pakistan.  Even though Mahatma Gandhi denounced the railways as evil, Sergeant reveals how it became a civil engineering triumph that united the country and played a crucial role when India became independent in 1947. 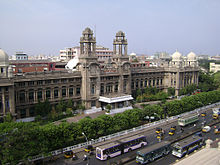 Indian Railways (reporting mark IR) is an Indian state-owned enterprise, owned and operated by the government of India through the Ministry of Railways. It is one of the world’s largest railway networks comprising 115,000 km (71,000 mi) of track over a route of 65,000 km (40,000 mi) and 7,500 stations. As of December 2012, it transported over 25 million passengers daily (over 9 billion on an annual basis). In 2011, IR carried over 8,900 million passengers annually or more than 24 million passengers daily (roughly half of which were suburban passengers) and 2.8 million tons of freight daily. In 2011-2012 Indian Railways earned

Railways were first introduced to India in 1853 from Bombay to Thane. In 1951 the systems were nationalized as one unit, the Indian Railways, becoming one of the largest networks in the world. IR operates both long distance and suburban rail systems on a multi-gauge network of broad, metre and narrow gauges. It also owns locomotive and coach production facilities at several places in India and are assigned codes identifying their gauge, kind of power and type of operation. Its operations cover twenty four states and three union territories and also provides limited international services to Nepal, Bangladesh and Pakistan.

Indian Railways is divided into several zones, which are further sub-divided into divisions. The number of zones in Indian Railways increased from six to eight in 1951, nine in 1952 and sixteen in 2003.   Each zonal railway is made up of a certain number of divisions, each having a divisional headquarters. There are a total of sixty-eight divisions.

Each of the sixteen zones is headed by a General Manager (GM) who reports directly to the Railway Board. The zones are further divided into divisions under the control of Divisional Railway Managers (DRM). The divisional officers of engineering, mechanical, electrical, signal and telecommunication, accounts, personnel, operating, commercial and safety branches report to the respective Divisional Manager and are in charge of operation and maintenance of assets. Further down the hierarchy tree are the Station Masters who control individual stations and the train movement through the track territory under their stations’ administration.