You are here: Home / Education / United States of America / Illinois 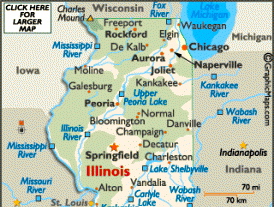 This is a video I did for a class as Western Illinois University detailing the begginning of a small river town in Illinois along the banks of the Mississippi River.

The history of Illinois may be defined by several broad historical periods, namely, the pre-Columbian period, the era of European exploration and colonization, its development as part of the American frontier, and finally, its growth into one of the most populous and economically powerful states of the United States.

Cahokia, the urban center of the pre-Columbian Mississippian culture, was located near present-day Collinsville, Illinois. That civilization vanished circa 1400–1500 for unknown reasons. The next major power in the region was the Illiniwek Confederation, a political alliance among several tribes. The Illiniwek gave Illinois its name. The Illini suffered in the 17th century as Iroquois expansion (caused by European expansion in the eastern United States) forced them to compete with several tribes for land. The Illini were replaced in Illinois by the Potawatomi, Miami, Sauk, and other tribes. 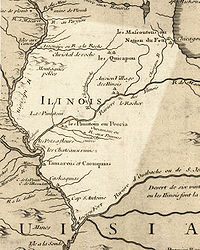 French explorers Jacques Marquette and Louis Jolliet explored the Mississippi and Illinois Rivers in 1673. As a result of their exploration, the Illinois Country was part of the French empire until 1763, when it passed to the British. The area was ceded to the new United States in 1783 and became part of the Northwest Territory.

The Illinois-Wabash Company was an early claimant to much of Illinois. The Illinois Territorywas created on February 3, 1809. Illinois saw the construction of numerous civilian forts during the War of 1812, as well as the short-lived Fort Johnson.

On December 3, 1818, Illinois became the 21st U.S. state. Early U.S. settlement began in the south part of the state and quickly spread northward, driving out the native residents. In 1832, some Indians returned from Iowa but were driven out in the Black Hawk War, fought by militia.

Illinois is known as the “Land of Lincoln” because it is here that the 16th President spent his formative years. Chicago gained prominence as a lake and canal port after 1848, and as a rail hub soon afterward. By 1857, Chicago was the state’s dominant metropolis. (see History of Chicago).

The state has a varied history in relation to slavery and the treatment of African Americans in genera   The French had black slaves from 1719 to as late as the 1820’s. Slavery was nominally banned by the Northwest Ordnance, but that was not enforced. But when Illinois became a sovereign state in 1818, the Ordnance no longer applied, and there were about 900 slaves there. As the southern part of the state, known as “Egypt,” was largely settled by migrants from the South, the section was hostile to free blacks and allowed settlers to bring slaves with them for labor. Proslavery elements tried to call a convention to legalize slavery, but they were blocked by Governor Edward Coles who mobilized anti-slavery forces, warning that rich slave owners would buy up all the good farm lands.  A referendum in 1823 showed 60% of the voters opposed slavery, so efforts to make slavery official failed. Nevertheless, some slaves were brought in seasonally or as house servants as late as the 1840s.   The Illinois Constitution of 1848 was written with a provision for exclusionary laws to be passed. In 1853, state senator John A. Logan helped pass a law to prohibit all African Americans, including freedmen, from settling in the state. After 1865 Logan reversed positions and became a leading advocate of civil rights for blacks.

In 1839, members of the Church of Jesus Christ of Latter Day Saints, also known as Mormons, created a settlement they called Nauvoo. The city, situated on a prominent bend along the Mississippi River, quickly grew to 12,000 inhabitants, and was for a time rivaling for the title of largest city in Illinois. By the early 1840s, the LDS church built a large stone temple in Nauvoo, one of the largest buildings in Illinois at the time, which was completed in 1846. In 1844, the founder of the Latter Day Saint movement Joseph Smith, Jr. was assassinated in nearby Carthage, Illinois, even though he was under the protection of Illinois judicial system, with assurances of his safety from then Governor Ford. In 1846, the Mormons under Brigham Young left Illinois for what would becomeUtah, but what was still then Mexican territory. A small breakaway group remained, but Nauvoo fell largely into abandonment. Nauvoo today has many restored buildings from the 1840’s.

During the Civil War, over 250,000 Illinois men served in the Union Army, coming 4th in the states. Starting with President Lincoln’s first call for troops and continuing throughout the war, Illinois sent 150 infantry regiments; they were numbered from the 7th IL to the 156th IL. Seventeen cavalry regiments also served as well as two light artillery regiments. The most well worked soldier was Ulysses S. Grant of Galena. Throughout the war the Republicans were in control, under the firm leadership of Governor Richard Yat.  The Democrats had a strong Copperhead element that opposed the war and tried in local areas to disrupt the draft. In Chicago, Wilbur F. Storey made his Democratic newspaper the Chicago Times into Lincoln’s most vituperative enemy.