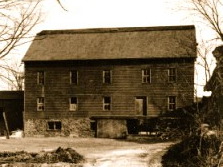 Ralph Hunt built the earliest section of this Mill to process wool sometime around 1810.  His wool business failed, however, thanks to a permanent downturn in the market for domestic cloth. By 1820 Ralph confessed to the Census that “the establishment has been doing very little for two or three years past. The demand for sale of the cloths and sattinets are very dull…a few of the farmers get their wool manufactured, but from the low prices of foreign cloths.”  Things did not improve and Ralph lost all of the family’s property, more than 400 acres and mills on both sides of the river. He defaulted on his mortgage, and the Taylot family took ownership.

From 1828 to 1834 John Bray and John B. Taylor took over running the Woolen Mill. The Taylors, now the dominant merchant family, changed the name of the town from Hunt’s Mills to Clinton, after the popular New York governor DeWitt Clinton.  Bray and Taylor continued in the woolen business but they also diversified by grinding feed, flour and stone plaister, as well as by selling chestnut wood for rails.  They even opened a dry goods establishment which carried everything from china to sheet iron.  But Bray and Taylor also failed in their business, selling it for three quarters of its purchase price.

John W. Snyder, the new owner, refitted the Mill for grist and ceased wool production.  But he too quickly fell into debt, and lost the property in 1842.  After a swift series of owners, the Easton Bank split the site into a mill and a quarry. In 1847 the Mill was sold to John F. Stiger and John A. Young, who used it to grind flour and grist.  In 1868 Young sold his part of the business to his partner, John Stiger, who continued to operate it as a grist mill.

In 1871 Stiger sold the mill and it again changed hands several times before it was purchased by Philip Gulick in 1873.  Gulick ground grist on the third and fourth floors of the mill and produced peach baskets in the first level. In 1892 Gulick set up The Clinton Illuminating and Water Co. on the second floor of the mill.  It provided electricity for Clinton’s street lamps.  Gulick died in 1901 and his widow rented the Mill to Elmer and Chester Tomson and in 1905 they purchased it outright.

Chester changed the mill’s operation to grist to graphite and for a short time the mill became known as the “Black Mill”.  The greasy black dust was wildly unpopular in town, and after a public outcry he turned to grinding talc and the Mill was soon dubbed the “White Mill.”

The talc mill was in operation day and night, with three run of stone, three elevators and one crusher.  Electricity powered the lights until midnight, when six kerosene torches took over.  Two storage sheds had been built between 1903 and 1912, one small in front of the mill and a larger behind.  In 1928 Chester sold the mill to the Clinton Water Supply Company, and the mill ceased operations.

Today the Mill houses a large portion of the Museum’s collection.  Each floor tells a small part of the history of this building and its ever changing role within the Clinton Community.

Justus Falckner leads Zion’s first service on August 1, 1714 at home of freed slave Aree van Guinee.  For 297 years the Word has been preached and the sacraments administered in New Jersey’s oldest Lutheran congregation, Zion Evangelical Lutheran Church in Oldwick, NJ.  The congregation is located in north central New Jersey, about equidistant from New York to the east and Philadelphia to the south.

The congregation’s first service was held August 1, 1714, at the home of Aree van Guinee, a dedicated Christian concerned about the spiritual welfare of his family and neighbors.  A freed slave, van Guinee was born in Dutch Guinea, Africa.

Church records indicate that the van Guinees had been members since 1705 of the “Dutch” Lutheran congregation in Manhattan – a mix of Germans, Danes, Norwegians, Swedes, and others.  For them, Dutch had become their common language.  Van Guinee later moved his family to the edge of the western frontier (New Jersey) and became a property owner.  It is highly likely that van Guinee played a leading role in obtaining a pastor for Zion’s first service.

The distinguished New York pastor Justus Falckner, the first Protestant clergyman ever ordained in America, led the worshippers.  A Lutheran historian describes Falckner as a man with a particularly amiable, heart-winning personality.  When Falckner was away, a lay reader (Vorleser) led the worship. Pickel was a successful farmer and became a prominent participant in the affairs of the Zion congregation and a generous benefactor, the builder of the congregation’s first church building.

During Zion’s first service – probably held not far from the confluence of the Millstone and Raritan rivers in the later Franklin Township north of Princeton – van Guinee’s wife and children were confirmed, and his grandchild baptized.  Also attending were at least eight and possibly 19 recent emigrants from Germany.

Most of the charter members of the Zion Lutheran Church were from the Palatinate area of Germany near the Rhine River.  They had fled their homeland and its long series of wars and severe tax burdens for the promise of America’s colonies.  In 1710, over 2,000 Palatinates were resettled in the Hudson Valley.  When their intended work project failed, most of them sought prospects elsewhere. Some came into the Raritan Valley of New Jersey.