You are here: Home / Colleges and Universities / Education / History of Temple University 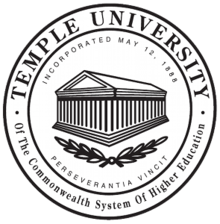 On January 18, 1884 a three-story house at 3403 North Broad Street was purchased and re-named Samaritan Hospital. Dr. Russell Conwell was appointed president of the 20-bed hospital, which was designed to provide free care for those unable to afford payment, regardless of race, nationality or creed.

Temple University is a comprehensive public research university in Philadelphia, Pennsylvania, United States. Originally founded in 1884 by Dr. Russell Conwell, Temple University is among the nation’s largest providers of professional education (law, medicine, podiatric medicine, pharmacy, dentistry, architecture) and prepares the largest body of professional practitioners in Pennsylvania, offering over 300 academic degree programs at seven campuses and sites in Pennsylvania and its international campuses in Rome, Tokyo, and London. It is the 26th largest university in the United States with more than 37,000 undergraduate, graduate, and professional students. Temple is one of Pennsylvania’s state-related universities, meaning that it receives state funds but is independently operated. It shares this status with the Pennsylvania State University, the University of Pittsburgh, and Lincoln University.

Temple University was founded in 1884 by Dr. Russell Conwell, a Yale-educated Boston lawyer, orator, and ordained Baptist minister, who had served in the Union Army during the American Civil War. Conwell came to Pennsylvania in 1882 to lead the Grace Baptist Church while he began tutoring working class citizens late at night to accommodate their work schedules. These students, later dubbed “night owls,” were taught in the basement of Conwell’s Baptist Temple, hence where the university receives its name. The Grace Baptist Church quickly grew popular within the North Philadelphia area. A temporary board of trustees was created to handle the rapidly growing formalities associated with the church’s programs. When the board conducted its first meeting they named Russell H. Conwell president of The Temple College. Within the coming months, Grace Baptist Church appointed a new board of trustees, printed official admissions files, and issued stock to raise funds for new teaching facilities. Regardless of whether they had the resources to support the school, Conwell desire was give education to those who were unable to get it through the usual channels.”

Billings granted a charter in 1888 to establish The Temple College of Billings,” but the city refused to grant authority to award academic degrees. By 1888, the enrollment of the college was nearly 600. It was in 1907 that Temple College revised its institutional status and incorporated as a university. Legal recognition as a university enhanced Temple in noticeable ways including its reputation, professional and graduate programs, overall enrollment, and financial support.

Over time, Temple expanded: Samaritan Hospital was founded, a Medical School was added, and Temple merged with the Billings Dental College. After the merger, Temple officially reincorporated as Temple University on December 12, 1907.