You are here: Home / Colleges and Universities / Education / History of Rutgers University 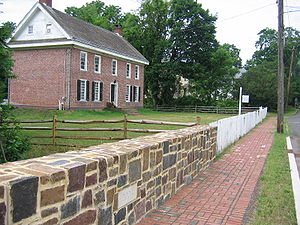 http://www.rutgers.edu/
From Wikipedia, the free encyclopedia

Rutgers, The State University of New Jersey (also known as Rutgers University) is an institution of higher learning with campuses across the State of New Jersey its main flagship campus in New Brunswick and Piscataway, and two other campuses in the cities of Newark and Camden, New Jersey.

The eighth of nine colleges established during the American colonial period, Rutgers was chartered as Queen’s College on 10 November 1766. It was renamed Rutgers College in 1825 after Colonel Henry Rutgers (1745-1830), an American Revolutionary War hero philanthropist and an early benefactor of the school. With the development of graduated education, Rutgers College was renamed Rutgers University in 1924. Originally established as a private institution affiliated with the Dutch Reformed Church, it is now a secular institution and became New Jersey’s leading state university of New Jersey under legislation passed in 1945 and 1956. At present, Rutgers is unique as the only university in the United States that is a colonial chartered college (1766), a land-grant institution (1864), and a state university (1945/1956).

Jacob Rutsen Hardenbergh and Theodorus Frelinghuysen’s son John lived in this building, known as the “Old Dutch Parsonage,” in Somerville, New Jersey. Shortly after the creation of the College of New Jersey (later Princeton University) by Presbyterians in 1746, ministers of the Dutch Reformed Church sought to establish autonomy in ecclesiastical affairs. At that time, those who wanted to become ministers within the church had to travel to the Netherlands to be trained and ordained, and many of the affairs of churches in the American colonies were managed from Europe. Thus, the ministers sought to create a governing body known as a classis to give local autonomy to the church in the colonies, and offer opportunities for the education of ministers.

Throughout the 1750’s, Dutch ministers joined the effort to create a classis in the colonies, including Theodorus Jacobus Frelinghuysen who traveled on horseback in winter of 1755 to several congregations throughout the northeast to rally ministers and congregations to the cause. Soon after, Frelinghuysen traveled to the Netherlands to appeal to the General Synod, the Dutch Reformed Church’s governing council, for the creation of the classis. In 1761, the effort having failed, Frelinghuysen set sail for the colonies, but as his vessel approached New York City he mysteriously perished at sea.

After Frelinghuysen’s death, Jacob Rutsen Hardenbergh (later Rutgers’ first president) established himself as spokesperson for the cause, and a strong supporter of establishing a college in New Jersey. Hardenbergh travelled to Europe, renewing Frelinghuysen’s efforts to gain the Synod’s approval, but was also rejected. Much to the Synod’s chagrin, however, Hardenburgh returned to the colonies with money for the establishment of a college.

Queen’s College
The school now called Rutgers, The State University of New Jersey, was chartered on November 10, 1766 as “the trustees of Queen’s College, in New-Jersey” in honor of King George III’s Queen-consort, Charlotte of Mecklenburg-Strelitz (1744-1818). The charter was signed and the young college was supported by William Franklin (1730-1813), the last Royal Governor of New Jersey and illegitimate son of Benjamin Franklin.

The original charter specified the establishment both of the college, and of an institution called the Queen’s College Grammar School, intended to be a preparatory school affiliated and governed by the college. This institution, today the Rutgers Preparatory School, was a part of the college community until 1957.

The original purpose of Queen’s College was to “educate the youth in language, liberal, the divinity, and useful arts and sciences” and for the training of future ministers for the Dutch Reformed Church though the university is now non-sectarian and makes no religious demands on its students. In May 1771, the Board of Trustees voted 10 to 7 to establish the college at New Brunswick, selecting it over Hackensack, New Jersey.  The Anglican population in New Brunswick supported the institution, thus receiving a royal charter for New Brunswick would be easier. It admitted its first students in 1771 a single sophomore and a handful of first-year students taught by a lone instructor (Frederick Frelinghuysen) and granted its first degree in 1774, to Matthew Leydt.

Despite the religious nature of the college, it first held classes at a tavern called the Sign of the Red Lion, located on the corner of Albany and Neilson streets on what is today the grounds of the Johnson & Johnson corporate headquarters in New Brunswick. When the Revolutionary War broke out and taverns were suspected by the British as being hotbeds of rebel activity, the college abandoned the tavern and held classes in private houses, in and near New Brunswick.

In its early years, Queen’s College was plagued by a lack of funds. In 1793, with the fledgling college falling on hard times, the board of trustees voted on a resolution to merge with the College of New Jersey (now Princeton University). The measure failed by one vote. The problem did not go away, and in 1795, lacking both funds and tutors, the trustees consider moving the college to New York. Instead, they decide to close, only to reopen in 1808 after the Trustees raised $12,000.

The next year, the College got a building of its own, affectionately called “Old Queens” (still standing), designed by the noted architect John McComb (who also designed City Hall in Manhattan), which is regarded today by architectural experts as one of the nation’s finest examples of Federal architecture. The college’s third president, the Rev. Ira Condict, laid the cornerstone on April 27, 1809. However, financial woes delayed completion of the building for 14 years.

The New Brunswick Theological Seminary, founded in 1784, relocated from Brooklyn, New York, to New Brunswick in 1810, and shared facilities with Queen’s College (and the Queen’s College Grammar School, as both were then under the oversight of the Reformed Church in America. During those formative years, all three institutions were fit into the Old Queens Building, then the only structure on campus. During its early years, the college developed as a classic liberal arts institution, and this development (coupled with both institutions’ growing larger and resulting in overcrowding at the site), caused Rutgers College and the New Brunswick Theological Seminary to sever this arrangement. In 1856, the Seminary relocated to a seven-acre (28,000) tract less than one-half mile (800m) away. Both institutions maintain a close-knit relationship to this day, and the Seminary’s Gardner Sage Library participates in the Rutgers University Library system.

A nationwide economic depression, combined with impending war, forced Queen’s College to close down a second time, in 1812. In 1825, Queen’s College was reopened, and its name was changed to “Rutgers College” in honor of American Revolutionary War hero Colonel Henry Rutgers (1745-1830). According to the Board of Trustees, Colonel Rutgers was honored because he epitomized Christian values, although it should be noted the Colonel was a wealthy bachelor known for his philanthropy. A year after the school renamed itself, it received 2 donations from its namesake. Rutgers, a descendant of an old Dutch family that had settled in New Amsterdam (now New York City), gave the fledgling college a $200 bell that hangs from the cupola of the Old Queen’s building; then later in 1826 he donated the interest on a $5,000 bond. This second donation finally gave the college the sound financial footing it had sorely needed. The college’s early troubles inspired numerous student songs, including an adaptation of the drinking song Down Among the Dead Men, with the lyrics “Here’s a toast to old Rutgers, loyal men/May she ne’er go down but to rise again.”

Rutgers College became the land-grant college of New Jersey in 1864 under the Morrill Act of 1862, resulting in the establishment of the Rutgers Scientific School, featuring departments of agriculture, engineering, and chemistry. Further expansion in the sciences came with the founding of the New Jersey Agricultural Experiment Station in 1880 and the division of the Rutgers Scientific School into the College of Engineering (now the School of Engineering) in 1914 and the College of Agriculture (now Cook College) in 1921.The precursors to several other Rutgers divisions were also established during this period: the College of Pharmacy (now the Ernest Mario School of Pharmacy) in 1892, the New Jersey College for Women (now Douglass College) in 1918, and the School of Education in 1924. Later, University College, founded to serve part-time, commuting students and Livingston College, emphasizing the urban experience, were created.

The first Summer Session began in 1913 with one six-week session. That summer program offered 47 courses and had an enrollment of 314 students. Currently, Summer Session offers over 1,000 courses to more than 15,000 students on the Camden, Newark, and New Brunswick/Piscataway campuses, off-campus, and abroad.