You are here: Home / Education / Sports / History of Car Racing

History of Car Racing: The beginning of racing

Racing began soon after the construction of the first successful gasoline-fueled automobiles. The first race ever organized was on April 28, 1887 by the chief editor of Paris publication Le Vlocipde, Monsieur Fossier. It ran 2 kilometers from Neuilly Bridge to the Bois de Boulogne. It was won by Georges Bouton of the De Dion-Bouton Company, in a car he had constructed with Albert, the Comte de Dion, but as he was the only competitor to show up it is rather difficult to call it a race.

On July 22, 1894, the Parisian magazine Le Petit Journal organized what is considered to be the world’s first car race from Paris to Rouen. Sporting events were a tried and tested form of publicity stunt and circulation booster. Pierre Giffard, the paper’s editor, promoted it as a Competition for Horeseless Carriages (Concours des Voitures sans Chevaux) that were not dangerous, easy to drive, and cheap during the journey. Thus it blurred the distinctions between a reliability trial, a general event and a race, but the main prize was for the first across the finish line in Rouen. 102 people paid the 10 franc entrance fee.

69 cars started the 50 km (31 mi) selection event that would show which entrants would be allowed to start the main event, the 127 km (79 mi) race from Paris to Rouen. The entrants ranged from serious manufacturers like Peugeot, Panhard or De Dion to amateur owners, and only 25 were selected for the main race.

The race started from Porte Maillot and went through the Bois de Boulogne. Count Jules-Albert de Dion was first into Rouen after 6 hours and 48 minutes at an average speed of 19 km/h. He finished 330 ahead of Georges Lema®tre (Peugeot), followed by Doriot (Peugeot) at 1630 Ren Panhard (Panhard) at 3330 and ‰mile Levassor (Panhard) at 5530. The official winners were Peugeot and Panhard as cars were judged on their speed, handling and safety characteristics, and De Dion’s steam car needed a stoker which was forbidden.

In 1895, the Paris-Bordeaux-Paris Trial was held and this was the first real race as all competitors started together. The winner was mile Levassor in his Panhard-Levassor 1205cc model. He completed the course (1,178 km or 732 miles) in 48 hours and 47Â minutes, finishing nearly six hours before the runner-up.

The first regular auto racing venue was Nice, France, run in late March, 1897, as a “Speed Week. To fill out the schedule, most types of racing events were invented here, including the first hill climb (Nice La Turbie) and a sprint that was, in spirit, the first drag race.

An international competition, between nations rather than individuals, began with the Gordon Bennett Cup in auto racing.

The first auto race in the United States took place in Chicago, Illinois on November 28, 1895. The 54.36 mile (87.48 km) course ran from the South side of the city, north along the lakefront toEvanston, Illinois, and back again. Frank Duryea won the race in 10 hours and 23 minutes, beating three petrol-fueled motorcars.

The Parisian artist Ernest Montaut, and his wife Marguerite, faithfully documented the rapidly changing face of motorized transportation in Europe. They produced large numbers of posters and prints published by Mabileau et Cie, covering racing events involving motorcars, aircraft, dirigibles and speedboats. These images formed a valuable contribution to the history of transport, and particularly to its racing aspect. 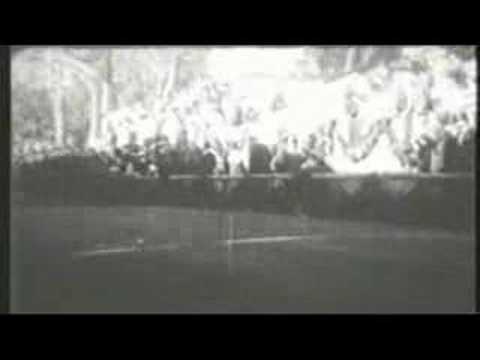 With auto construction and racing dominated by France, the French automobile club ACF staged a number of major international races, usually from or to Paris, connecting with another major city, in France or elsewhere in Europe.

The very successful early european rally races ended in 1902 when Marcel Renault was involved in a fatal accident near Angoulªme in the Paris-Madrid race. Nine fatalities caused the French government to stop the race in Bordeaux and ban open-road racing.

The longest automobile race in history, with Paris as the finish line was the 1908 New York to Paris Race. Six teams from France, Italy, Germany, and the United States competed with three teams actually reaching Paris. The American Thomas Flyer driven by George Schuster was declared the winner of the epic 22,000 mile race in 169 days.