You are here: Home / Contributing Writers / E-Books / Heroes of the Holocaust

Heroes of the Holocaust 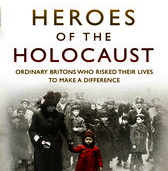 Hidden Heroes of the Holocaust

Our first episode of the Hidden Heroes of the Holocaust series in entitled, “Carl Lutz – Dangerous Diplomacy.” Mr. Lutz, in his position as Swiss vice-consul in Budapest, devised and implemented a clever plan in which he rescued an astounding number of people from certain death. Vice-consul Lutz is credited with saving the lives of 62,000 Jews destined for Auschwitz. 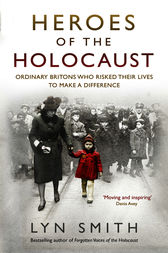 Heroes of the Holocaust: Ordinary Britons who risked their lives to make a difference Lyn Smith

Collected here for the first time are the remarkable and moving stories of the 27 British recipients of the ‘Hero of the Holocaust’ award. During one of the darkest times in human history they refused to stand by and do nothing; risking their lives to save Jewish friends, or complete strangers. And yet many of their stories have been forgotten.

Frank Foley, a British spy whose cover was working at the British embassy in Berlin, took huge risks issuing forged visas to enable around 10,000 Jews to escape Germany before the outbreak of war.

Jane Haining refused to come back to Scotland and leave the Jewish orphans in her care in Hungary. When they were sent to Auschwitz she was transported with them.

Louise and Ida Cook were sisters from suburban London. They used their love of opera as a cover to take daring trips to help Jews escape Nazi Germany and Austria right up until the outbreak of war.

Ten British POW’s hid and cared for young Hannah Sarah Rigler when she escaped from a death march, having been forced to leave her mother behind.

All those whose stories are collected here were ordinary people, acting on no one’s authority but their own, who found they could not stand idly by in the face of such great evil.

Written by acclaimed Holocaust historian Lyn Smith, Heroes of the Holocaust is a moving testament to the bravery of those whose inspiring actions stand out in stark relief at a time of such horror.