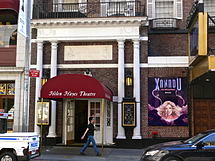 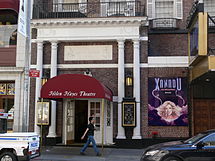 The Little Theatre was designed by the architect Harry Creighton Ingalls of the firm Ingalls & Hoffman, and built by Winthrop Ames; its name was chosen due to both the theatre’s small size (with a seating capacity of only 300), and its goal to create intimate productions.

The theatre opened on March 12, 1912 with John Galsworthy‘s play The Pigeon. Other plays opening that year include

In the 1920s, Herbert J. Krapp redesigned the theatre to increase its seating capacity to 590 and to improve its acoustics. In 1931 the building was sold to the The New York Times and converted into a conference hall named the New York Times Hall. 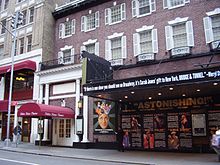 In 1979, Martin Markinson and Donald Tick bought the theatre from Westinghouse for $800,000.

The theatre was named for Helen Hayes in 1983 when the actress’ existing namesake theatre on West 46th Street was demolished (along with the Morosco Theatre and the Bijou Theatre), in order to construct the New York Marriott Marquis.

In July 2008 it was announced that Markinson and the Tick family planned to sell the theatre to the Second Stage Theatre company for an undisclosed price. Second Stage said it needs to raise $35 million to then possibly buy the theatre, which would likely be renamed.  Second Stage’s first season is targeted for 2013.

Rock of Ages achieved the box office record for the Helen Hayes Theatre. The production grossed $745,205 over nine performances, for the week ending December 31, 2012.

CBS used the theatre as a radio studio for a time, but it was converted to television by ABC in 1958 and renamed the Little Theatre. Dick Clark‘s Saturday night The Dick Clark Show originated there from February 1958 through September 1961. During this time ABC also broadcast the daytime show Who Do You Trust? with Johnny Carson from the theatre. It was briefly renamed the Winthrop Ames Theatre in 1964. From 1965 through 1983 it was again the Little Theatre. During the early part of that period, Westinghouse Broadcasting taped the syndicated Merv Griffin Show there and later, The David Frost Show. The 1969–70 season of the game show Beat the Clock hosted by Jack Narz was also taped there.

In April 2011, Colin Quinn‘s one-man show Long Story Short was recorded there as an HBO special.