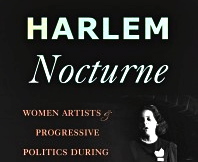 When Farah Griffin asked her mother what she remembered about World War II, her response was, “All the handsome soldiers who drove the buses in Philadelphia.” Griffin, the William B. Ransford Professor of English, Comparative Literature and African American Studies, was perplexed. Then she thought, of course, she was a teenager, she remembers handsome young men! It was only while researching her new book set during the period, Harlem Nocturne: Women Artists and Progressive Politics During World War II, that Griffin put it all together: During the war, white transit workers went on strike over integration of their union, causing a nationwide uproar, and black soldiers were brought in by the federal government to drive the buses. Full Story: http://news.columbia.edu/newyorkstori… 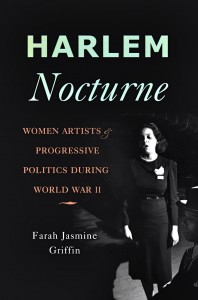 As World War II raged overseas, Harlem witnessed a battle of its own. Brimming with creative and political energy, Harlem’s diverse array of artists and activists launched a bold cultural offensive aimed at winning democracy for all Americans, regardless of race or gender. In Harlem Nocturne, esteemed scholar Farah Jasmine Griffin tells the stories of three black female artists whose creative and political efforts fueled this movement for change: novelist Ann Petry, a major new literary voice; choreographer and dancer Pearl Primus, a pioneer in her field; and composer and pianist Mary Lou Williams, a prominent figure in the emergence of Bebop. As Griffin shows, these women made enormous strides for social justice during the war, laying the groundwork for the Civil Rights Movement before the Cold War temporarily froze their democratic dreams. Harlem Nocturne captures a period of unprecedented vitality and progress for African Americans and women in the United States.

Farah Jasmine Griffin is a professor of English and comparative literature and African American Studies at Columbia University, where she has served as director of the Institute for Research in African American studies. In addition to editing several collections of letters and essays she is the author of Who Set You Flowin’: The African American Migration Narrative (Oxford, 1995), If You Can’t Be Free, Be a Mystery: In Search of Billie Holiday (Free Press, 2001) and Clawing At the Limits of Cool: Miles Davis, John Coltrane, and the Greatest Jazz Collaboration Ever (Thomas Dunne, 2008).