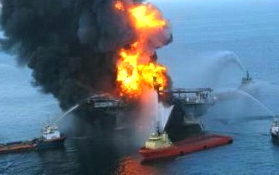 Profit Pollution and Deception BP and the Oil Spill

Profit Pollution and Deception BP and the Oil Spill FULL DOCUMENTARY HD. The Deepwater Horizon oil spill (also referred to as the BP oil spill, the BP oil disaster, the Gulf of Mexico oil spill, and the Macondo blowout) began on 20 April 2010 in the Gulf of Mexico on the BP-operated Macondo Prospect. It claimed eleven lives and is considered the largest accidental marine oil spill in the history of the petroleum industry, an estimated 8% to 31% larger in volume than the previously largest, the Ixtoc I oil spill. Following the explosion and sinking of the Deepwater Horizon oil rig, a sea-floor oil gusher flowed for 87 days, until it was capped on 15 July 2010. The total discharge has been estimated at 4.9 million barrels (210 million US gal; 780,000 m3).

WASHINGTON, DC, April 20, 2012 (ENS) – Today marks the second anniversary of the blowout of BP’s Deepwater Horizon oil rig in the Gulf of Mexico that claimed the lives of 11 workers and unleashed the largest accidental marine oil spill in the history of the petroleum industry. 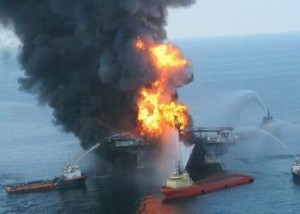 “Eleven people died on April 20, 2010 and at BP our thoughts are with their families, friends and colleagues,” Bob Dudley, Group Chief Executive, BP, said today. “We deeply regret the loss of their lives and we are continuing to take action to meet our commitments to the Gulf of Mexico community and to implement what we have learned worldwide.”

At the time of the explosion, BP was using the Deepwater Horizon to drill an exploratory well at a water depth of approximately 5,000 feet in the Macondo Prospect, located about 41 miles off the Louisiana coast.

At 9:45 pm local time, on April 20, 2010, methane gas from the well 18,000 feet below the sea floor expanded into the drilling riser and caught fire. Flames engulfed the drilling rig, which burned for 36 hours before sinking.

The well ruptured, releasing about 4.9 million barrels of oil into the Gulf over a three month period before it was capped on July 19. The well was finally sealed on September 19, 2010.

By April 30, 2010, the oil had spread to cover 3,850 square miles (10,000 square km) and U.S. authorities closed a large part of the Gulf to fishing. Coastlines were contaminated in five states: Louisiana, Mississippi, Alabama, Florida and Texas.

In October 2011, a report by the National Oceanic and Atmospheric Administration found that dolphins and whales were dying at twice the normal rate. In March, a NOAA study found that bottlenose dolphins in Barataria Bay, Louisiana are sick after coming in contact with oily waters from the BP spill.

Earlier this month, scientists reported finding large numbers of mutated crab, shrimp and fish they believe to be the result of chemicals released during the oil spill and cleanup. 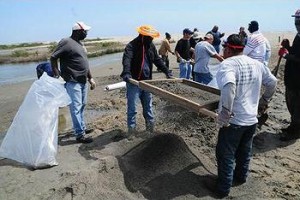 Tar balls continue to wash up along the Gulf coast two years after the spill began. Studies show the tar contains the deadly bacteriaVibrio vulnificus.

Fishing and tourism businesses across the Gulf were harmed and first responders as well as residents experienced health effects of petroleum exposure such as dizziness, vomiting, nausea, headaches, and chest pains.

To date, roughly 100,000 claims have been filed by individuals and businesses affected by the oil spill.

On Wednesday, BP announced that it has reached “definitive and fully documented agreements” with the Plaintiffs’ Steering Committee to resolve the “substantial majority” of eligible private economic loss and medical claims stemming from the Deepwater Horizon accident and oil spill.

The parties have filed for preliminary court approval of two settlement agreements, one resolving economic loss and property damage claims and the other resolving medical claims. To read more go to link above.