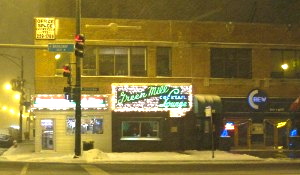 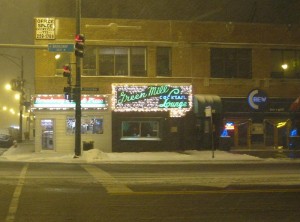 The Green Mill Cocktail Lounge (or Green Mill Jazz Club) is an entertainment venue on Broadway in Uptown, Chicago. It is known for its jazz and poetry performances, along with its connections to Chicago mob history.

Originally named Pop Morse’s Roadhouse, the business opened in 1907. It was renamed Green Mill Gardens a few years later, a nod to the famous Moulin Rouge (“Red Mill”) of Paris.  In its early years, it was a popular hangout for movie actors from nearby Essanay Studios.  The namesake gardens were removed in the 1920’s during the construction of the Uptown Theatre on the same block.

During the Prohibition era, Jack McGurn of Al Capone’s Chicago Outfit became a part-owner. Singer and comedian Joe E. Lewis was attacked by McGurn’s men in 1927 after he refused to take his act to the Green Mill. Lewis’ throat was slashed, but he survived. The incident inspired the 1957 film The Joker Is Wild. A network of tunnels underneath the establishment were used by the gangsters for various purposes.

Al Capone’s favorite booth is still in the establishment located directly west of the short end of the bar. Capone and his men would sit here because it afforded clear views of both the front and back entrances to the establishment. It is rumored that there is still an access hatch to the tunnels located directly behind the long end of the bar that leads underneath the street to an adjacent building; this is how Capone was able to elude the authorities when he visited the Green Mill.