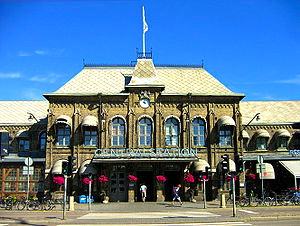 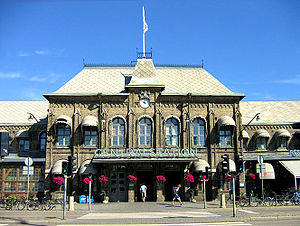 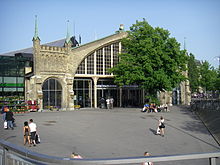 Numerous railways were built across Sweden in the 19th century. One of the first distances was the one between Gothenburg and Jonsered. As the railway grew more popular, the need for a station emerged. The Gothenburg Central Station was built between the years of 1856-1858. The architect in charge was Adolf Wilhelm Edelsvärd.

Some reconstructions have been made to the station since its opening in 1858. There used to be engine shed by the station but it has been removed. In 1923 a fire destroyed parts of the station, so the interior had to be rebuilt. The current interior design is similar to the 1923 model with wood pillars, glass ceiling and a floor made of limestone.

During the 19th and early 20th century about one million Swedish emigrants passed the station in order to get to the harbour. Their final destination would be America.[3]

In February 2007, a bomb threat was addressed to the Gothenburg police. The bombing was to take place on the Gothenburg Central Station. Later that day, a bag was found in the old parts of the station. The evacuation of the station began at 21.30 and two hour later the station was free to open again. The bag was examined and no high explosive was found.

In January 2010, a one square metre (11 Sq Ft) section of the station’s glass ceiling collapsed after ice had fallen onto it. One person suffered bruises by falling glass splinters and big parts of the station was closed due to safety reasons.