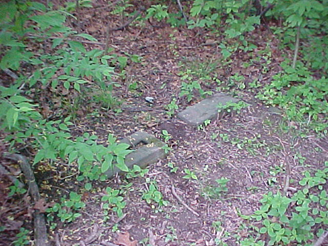 Bases of stones which once held graves at the Yellow Hill Cemetery.

Yellow Hill and the Quaker Valley
Stories of the Underground Railroad

Decades before the Civil War began; abolitionists were active north of Gettysburg in the area known as Quaker Valley and Yellow Hill. Located just north of the Mason Dixon line, this area was a safe haven for Gettysburgs African American community during the Confederate invasion. Here members of the Religious Society of Friends (Quakers) worked with local freedmen Edward Mathews and Basil Biggs to bring slaves to freedom along the Underground Railroad. Today, an abandoned cemetery is all that remains as evidence of the African American community that once thrived there.