You are here: Home / Education / United States of America / Georgia 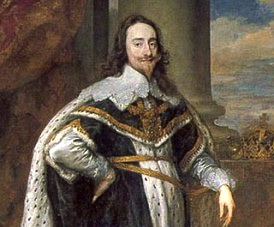 The “Georgia Traveler” team journeys to destinations across the state where the Civil War played out and where visitors today can sense what it was like. 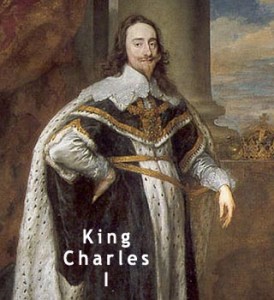 Many early attempts—notably the English Lost Colony of Roanoke—ended in failure, but several successful colonies were established. European settlers came from a variety of social and religious groups. No aristocrats settled permanently, but many adventurers, soldiers, farmers, and tradesmen arrived. The Dutch of New Netherland, the Swedes and Finns of New Sweden, the English Quakers of Pennsylvania, the English Puritans of New England, the English settlers of Jamestown, and the “worthy poor” of Georgia, among others—each group came to the new continent and built colonies with their distinctive social, religious, political and economic styles.

Historians typically recognize four distinct regions in the lands that later became the Eastern United States. From north to south, they are: New England, the Middle Colonies, the Chesapeake Bay Colonies (Upper South) and the Lower South. Some historians add a fifth region, the frontier, which was never separately organized. Other colonies that contributed land to the future United States include New France, Quebec (Louisiana), New Spain[5], and Russian Alaska. 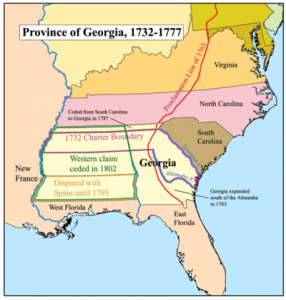 Georgia was formed in 1732 as a trustee colony and was named for George II, but became a royal colony in 1752. The colony originally prohibited slavery, a prohibition which lasted until 1749. Afterward, slavery grew in the colony, with many slaves coming from Sierra Leone, the Gambia, and Angola.

Initially, Georgia was hesitant to join the American Revolution, though the colonists sympathized with the other thirteen colonies concerning the trade rights of Englishmen and demanded representation in Parliament if they were going to be taxed by the British government. By 1776 Georgians had adopted “Rules and Regulations” on April 15, 1776, which can be considered the Constitution of 1776. (There never was a Georgia declaration of independence.) Archibald Bulloch, was elected the first President of newly independent state. On January 2, 1788, the state ratified the United States Constitution.

Seventy-three years after that ratification, Georgia seceded from the United States and joined other Southern states to form the Confederate States of America in February. War erupted on April 12, 1861 and Georgia sent hundreds of thousands of soldiers to battle. The first major battle in Georgia was the Battle of Chickamauga, a Confederate victory, and the last major Confederate victory in the west. In 1864, William T. Sherman‘s armies invaded Georgia as part of the Atlanta Campaign. One of the last land battles of the Civil War, the Battle of Columbus, Georgia, was fought on the Georgia-Alabama border.

The Mississippian culture, lasting from 800 to 1500 AD, developed urban societies, distinguished by their construction of truncated earthwork pyramid mounds, or platform mounds; as well as their hierarchical chiefdoms; intensive village-based horticulture, which enabled the development of more dense populations; and creation of ornate copper, shell and mica paraphernalia adorned with a series of motifs known as the Southeastern Ceremonial Complex (SECC). The largest Mound Builder sites surviving in present-day Georgia are Kolomoki in Early County, Etowah in Bartow County, and Ocmulgee National Monument in Macon.

At the time of European colonization of the Americas, the historic Iroquoian-speaking Cherokee and Muskogean-speaking Creek andYamasee Indians lived in what is now Georgia. The Cherokee spread southward along the Ridge and Valley Appalachians, occupying lands reaching to the upper Chattahoochee, which formed the southern boundary of their lands, stretching all the way to the Ohio River.

The Creek or Muscogee were a loose confederation of tribes descended from the Mississippian culture people. They were divided between the Lower Creeks along the Ocmulgee, Flint and the lower Chattahoochee rivers, and the more remote Upper Creeks along the Coosa and Alabama rivers. The Yamasee occupied the coastal areas along the Savannah River.

Spanish explorer Juan Ponce de León may have sailed along the coast during his exploration of Florida. In 1526, Lucas Vásquez de Ayllón attempted to establish a colony on an island, possibly near St. Catherines Island.

The French founded the colonial settlement of Charlesfort in 1562 on Parris Island, when Jean Ribault and his party of French Huguenots settled an area in the Port Royal Sound area of present-day South Carolina. Within a year the colony failed. Most of the colonists followed René Goulaine de Laudonnière south and founded a new outpost called Fort Caroline in present-day Florida.

Over the next few decades, a number of Spanish explorers from Florida visited the inland region of present-day Georgia. The local Mississippian culture, described by Hernando de Soto in 1540, had completely disappeared by 1560. The people may have succumbed to new infectious diseases introduced by the Europeans.

English fur traders from the Province of Carolina first encountered the Lower Creeks in 1690. The English established a fort at Ocmulgee. There they traded iron tools, guns, cloth, and rum for deerskins and Indian slaves captured by warring tribes in regular raids.

The conflict between Spain and Great Britain over control of Georgia began in earnest in about 1670, when the British colony of South Carolina was founded just north of the missionary provinces of Guale and Mocama, part of Spanish Florida. Guale and Mocama, today part of Georgia, lay between Carolina’s capital, Charles Town, and Spanish Florida’s capital, St. Augustine. They were subjected to repeated military invasions by both sides.

The Spanish mission system was permanently destroyed by 1704. The coast of future Georgia was occupied by British-allied Yamasee Indians until they were decimated in the Yamasee War of 1715–1717. The surviving Yamasee fled to Florida, leaving the coast of Georgia depopulated, making formation of a new British colony possible. A few defeated Yamasee remained and later became known as the Yamacraw.

English settlement began in the early 1730s after James Oglethorpe, a Member of Parliament, promoted the area be colonized with the worthy poor of England, to provide an alternative to the overcrowded debtors’ prisons. Oglethorpe and other English philanthropists secured a royal charter as the Trustees of the colony of Georgia on June 9, 1732.   The misconception of Georgia’s having been founded as a debtor or penal colony persists due to the numerous English convicts who were sentenced to transportation to Georgia. With the motto, “Not for ourselves, but for others,” the Trustees selected colonists for Georgia. On February 12, 1733, the first settlers arrived in the ship Anne, at what was to become the city of Savannah.

In 1742 the colony was invaded by Spanish forces during the War of Jenkins’ Ear. Oglethorpe mobilized local forces and defeated the Spanish at the Battle of Bloody Marsh. The Treaty of Aix-la-Chapelle, which ended the war, confirmed the English position in Georgia.

From 1735 to 1750, the trustees of Georgia, unique among Britain’s American colonies, prohibited African slavery as a matter of public policy. However, as the growing wealth of the slave-based plantation economy in neighboring South Carolina demonstrated, slaves were more profitable than other forms of labor available to colonists. Improving economic conditions in Europe led to fewer whites being willing to immigrate as indentured servants. In addition, many of the whites suffered high mortality rates from the climate and diseases of the Low Country.

In 1749, the state overturned its ban on slavery. From 1750 to 1775, planters so rapidly imported slaves that the enslaved population grew from less than 500 to approximately 18,000. Some historians have surmised that the Africans had the knowledge and material techniques to build the elaborate earthworks of dams, banks, and irrigation systems throughout the Low Country that supported rice and indigo cultivation; Georgia planters imported slaves chiefly from rice-growing regions of present-day Sierra Leone, the Gambiaand Angola.   Recent scholarship argues that the Europeans could have developed the rice culture on their own and that African knowledge played a minor role in the success of its cultivation as a commodity crop.   Later planters added sugar cane as a crop.

In 1752 Georgia became a royal colony. Planters from South Carolina, wealthier than the original settlers of Georgia, migrated south and soon dominated the colony. They replicated the customs and institutions of the South Carolina Low Country. Planters had higher rates of absenteeism from their large coastal plantations. They often took their families to the hills during the summer, the “sick season”, when the Low Country had high rates of disease.

The pacing and development of large plantations made the Georgia coast society more like that of the West Indies than of Virginia. There was a higher proportion of African-born slaves, and Africans who came from closely related regions. The slaves of the ‘Rice Coast’ of South Carolina and Georgia developed the unique Gullah or Geechee culture (the latter term more common in Georgia), in which important parts of West African linguistic, religious and cultural heritage were preserved. This culture developed throughout the Low Country and Sea Islands, where enslaved African Americans later worked at cotton plantations. African-American influence was strong on cuisine and music that became integral parts of southern culture.

Georgia was largely untouched by war during much of Britain’s involvement in the Seven Years War – as the colony was located a long distance from Canada and the French-allied Indians. However, in 1762 Georgia was believed to be under threat from a potential Spanish invasion from Florida, although this did not occur by the time peace was signed at the 1763 Treaty of Paris. During this period the Cherokee Rebellion began.

Governor Wright wrote in 1766 that Georgia had:

“No manufactures of the least consequence: a trifling quantity of coarse homespun cloth, wool [sic] and cotton mixed; amongst the poorer sort of people, for their own use, a few cotton and yarn stockings; shoes for our Negroes; and some occasional blacksmith’s work. But all our supplies of silk, linens, wool, shoes, stockings, nails, locks, hinges, and tools of every sort… are all imported from and through Great Britain.”