You are here: Home / Democracy Now! / Media / From COINTELPRO to Snowden

From COINTELPRO to Snowden

From COINTELPRO to Snowden, the FBI Burglars Speak Out After 43 Years of Silence (Part 2) 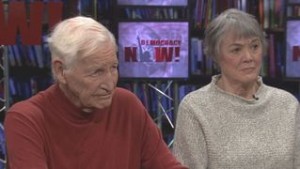 One of the great mysteries of the Vietnam War era has been solved. On March 8, 1971, a group of activists — including a cabdriver, a day care director and two professors — broke into an FBI office in Media, Pennsylvania. They stole every document they found and then leaked many to the press, including details about FBI abuses and the then-secret counter-intelligence program to infiltrate, monitor and disrupt social and political movements, nicknamed COINTELPRO. They called themselves the Citizens’ Commission to Investigate the FBI. No one was ever caught for the break-in. The burglars’ identities remained a secret until this week when they finally came forward to take credit for the caper that changed history. Today we are joined by three of them — John Raines, Bonnie Raines and Keith Forsyth; their attorney, David Kairys; and Betty Medsger, the former Washington Post reporter who first broke the story of the stolenFBI documents in 1971 and has now revealed the burglars’ identities in her new book, “The Burglary: The Discovery of J. Edgar Hoover’s Secret FBI.”

Click here to watch the one-hour Part 2 of this interview.

NERMEEN SHAIKH: Today, we will spend the rest of the hour unraveling one of the great mysteries of the Vietnam War era. On March 8th, 1971, a group of eight activists, including a cab driver, a daycare director and two professors, broke into an FBI office in Media, Pennsylvania, and stole every document they found. The activists, calling themselves the Citizens’ Commission to Investigate the FBI, soon began leaking shocking details aboutFBI abuses to the media. Among the documents was one that bore the mysterious word “COINTELPRO.”

AMY GOODMAN: No one involved in the break-in was ever caught. Their identities remained a secret until this week. Today, three of the FBI burglars will join us on the show, but first I want to turn to a new short film produced by the nonprofit news organization Retro Report for The New York Times. It’s titledStealing J. Edgar Hoover’s Secrets.

“NARRATOR: It’s the greatest heist you’ve never heard of and one of the most important.

HARRY REASONER: Last March, someone broke into the FBI offices in Media, Pennsylvania, stole some records and mailed copies of them around to the several newspapers.

NARRATOR: Those records would help bring an end to J. Edgar Hoover’s secret activities within the Federal Bureau of Investigation.

JOHN CHANCELLOR: He ordered his agents not only to expose New Left groups, but to take action against them to neutralize them.

UNIDENTIFIED: Many Americans were tapped and bugged, had their mail opened by the CIA and theFBI.

NARRATOR: The burglars were never caught, and the details have remained a mystery until now. A new book, The Burglary, reveals for the first time who did it and how they used a crowbar to pry open one of the best-kept and darkest secrets in American history.

NARRATOR: The burglars are stepping out of the shadows just as new revelations about secret intelligence operations have many people asking, “How much is too much when personal privacy is at stake?”

NARRATOR: And at home, antiwar protesters and law enforcement officers were violently clashing.

BONNIE RAINES: It felt like a nightmare was unfolding. I took what was outrage and horror about what was going on, and I realized that I had to take it somewhere.

NARRATOR: Bonnie Raines worked at a daycare center in Philadelphia. Her husband John taught religion at Temple University. They were the very picture of a golden couple.

BONNIE RAINES: We had an eight-year-old, a six-year-old and a two-year-old. We were family folks who also wanted to keep another track active in our lives, which was political activism.

NARRATOR: That activism attracted the attention of the FBI. Its director, the powerful and feared J. Edgar Hoover, perceived the antiwar movement, which ranged from radical revolutionaries to peaceful protesters, as a threat to national security.”